Dissolution's art assets were largely in place by this point. The final year of development was all about putting the gameplay, levels and story together.

The story established at this point (Woodrow Bell ordering the flooding of his colony with gas that turned the population into zombies) made little sense, was very unoriginal and was more an excuse for zombie-gameplay than an interesting story in its own right. 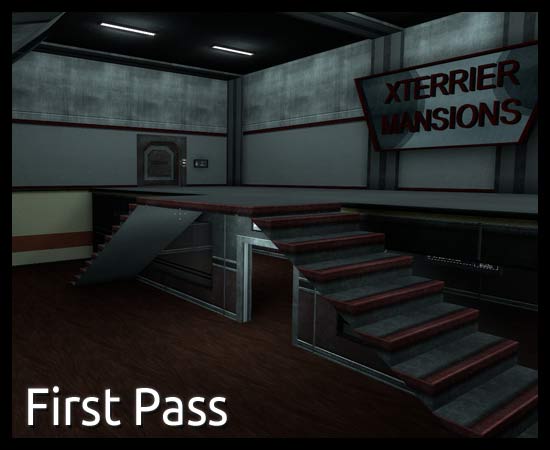 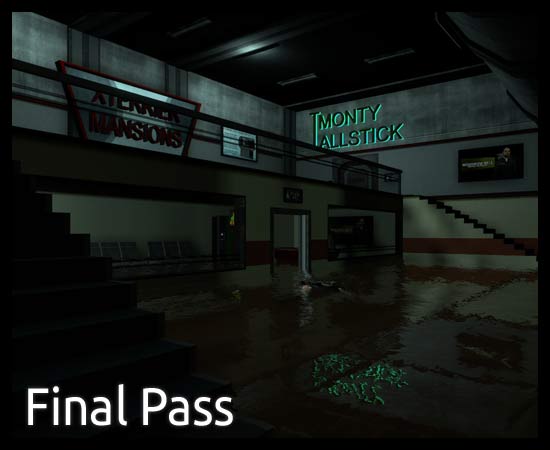 I wanted to maintain the post-disaster scenario: having the player picking through a collapsed colony and putting together the story after it had occurred. BioShock and System Shock 2 helped me realise that this didn't necessarily have to mean zombies. The citizens going insane and roaming the corridors might be a more satisfactory gameplay experience.

Unfortunately, I was still left with a problem ... how do I get the citizens of Xterrier into a state of insanity?

In the middle of this version of Dissolution, I took multiple breaks to work on two other mod projects: Redfield and Crows. 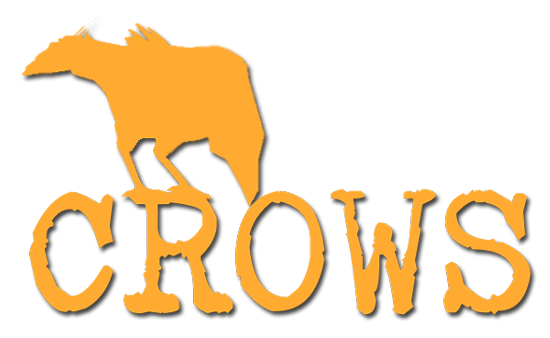 Neither of these mods would be released, but both would feed into Dissolution in a very big way.

Redfield was a crime-themed shooter. It was heavily inspired by Soldier of Fortune and featured relatively simple gameplay. You, Thomas Redfield, were a tough police officer in a crumbling, former-industrial city called Dabltown. As Redfield, you progressed through the alley ways, subways and industrial estates, shooting dead criminal gangs. The action was interspersed with cut scenes to tell the story.

Crows wasn't anything like Redfield. It had no action at all, and took place in a secret, underground laboratory in England. You had awoken in this laboratory with no memory as to how you got there. You had to piece together the story with audio cassettes while avoiding the deadly, telepathic crows.

Redfield's basic gun-play, art assets (which was quite a substantial collection) and code were consumed into Dissolution; as was Crows, most notably the idea of the psychotic crows, its meagre art assets and crow AI. The Crows storyline slotted into the Dissolution plot perfectly and filled the gap, as well as providing a strange and unusual twist to what was then a fairly standard science fiction plot-line.

Work resumed on Dissolution, with levels being created faster than ever due to the new method of designing levels in three stages: orange mapped, textured, final. 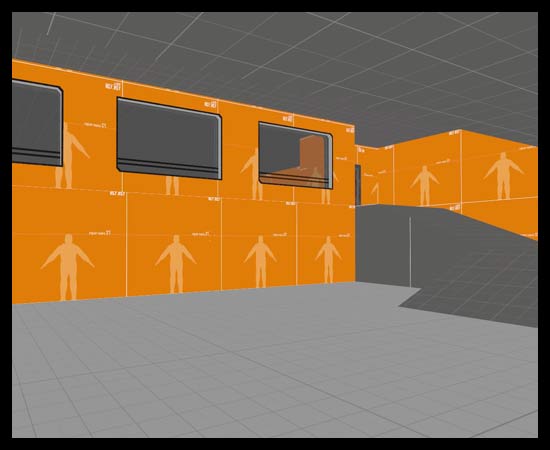 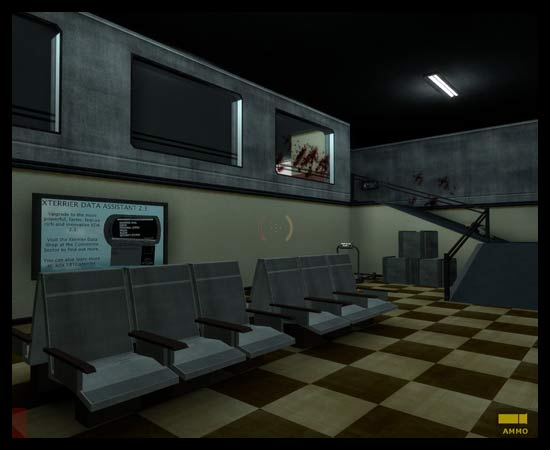 Map as it appeared in the released mod

The new method for developing levels, combined with a policy of creating areas designed for its in-universe function, resulted in one of Dissolution's best features: massive scope for exploration of and story-telling through the environment. Even with this new strategy, many levels were cut from the final game. The original Surface Complex being one of them.

In the final game, the player awakes to find themselves in a secret lab in the Waste Management sector. I don't think this is a particularly exciting start to the mod upon reflection, but it works. In the version of Dissolution that was released, the player never leaves the facility, which is underground; the surface of 581c is never seen. Originally, the player woke up on the surface and travelled down to the main facility. 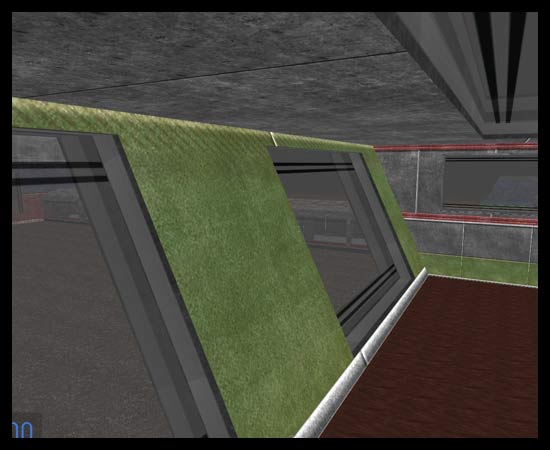 While this sector provided a great introduction to the colony, the area never actually worked in game. I could never get the design of it to look right and, eventually, it was removed for the simpler introduction level.

With the mod rapidly nearing release, with most of the assets nearly complete, it was time to start hiring. I can do a lot of the development work myself, but there are two areas I could not do for Dissolution:

I put job advertisements for both on ModDB, not really expecting to get any music composers. My experience with hiring for mods has informed me that many people apply for positions, and about 70% mysteriously disappear. It's as though your emails stop sending; there is no sign of life from the once-eager candidate.

So, you can imagine my surprise when I got three music composers... who were not only excellent, but all of whom produced significant contributions to the mod's original soundtrack. The original soundtrack is one of the real highlights of the mod. 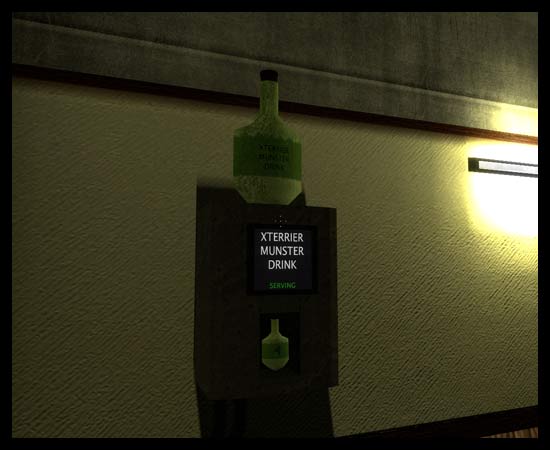 The original version of the vending machine

Voice acting, however, wasn't so smooth sailing. I had a lot of roles to fulfil, due to the use of audio logs for conveying the story. Many, many people applied ... but many also mysteriously disappeared. It took far longer than I expected to put the voice acting cast together, and it was very frustrating.

The actors who remained, however, were excellent. I was especially pleased with my voice actor for the main speaking character, Dr Wilson, but all of Dissolution's actors had an excellent work ethic. It took an age to find the right people, but when I did, there were no issues.

On 5th February 2011, Dissolution was released. I've had nearly three years to analyse the feedback for the mod, to critically analyse the project myself. I will present the facts first:

Moving onto my more personal thoughts, I will start with what I would change or parts of the mod I thought could have been done better.

The start and end of the mod were both heavily criticised. Upon release, I considered both to be strong and powerful. Time has since passed and I now side with those who criticised both. The start is slow and heavy-handed, it was full of tedious exposition. The end is sudden and unsatisfying.

The AI of the enemies was widely considered to be flawed. Enemies fired with 100% accuracy, relied on basic assault tactics and never varied in attack pattern. You walked into a room and ten or so enemies would spring out of every possible corner and door and you'd have to take them all down. I 100% agree with all criticism of the AI and enemy placement.

Visually, it's pretty dull. This is another common complaint. The areas are all grey, angular and similar-looking. Identical corridors divide areas and there is almost no variation in sectors.

So, what did I like about the mod? I do consider Dissolution to be my best mod, so what has it done well?

I really like the stories told in the mod. Many compared it to BioShock, but I can honestly say that I think they are thinking more of the method of story-telling. The story-telling -- like BioShock, System Shock 2, Doom 3 and others -- made use of audio diaries to relay character's thoughts. The actual story of Dissolution takes its inspiration from so many sources that I will only list a few: Frankenstein, Nineteen-Eighty-Four, Aliens, Penumbra... There were many stories in Dissolution, many themes -- and I think they are one of the mod's great strengths. My favourite storylines are probably the Graham and Woodrow Bell storylines, and Goldman's storyline.

The environment/level-design. This may seem to contradict my earlier points on the blandness of the design, but I think that the actual levels were well-designed. They provided a lot of opportunity for exploration and provided a relatively non-linear gameplay experience. One of the most commonly-praised aspects of the design was the fact that the levels were more like real places than simply rooms for the player to shoot his way through.

The atmosphere of the mod. This was sometimes missing in some levels, but I feel that the mod largely had a strong, immersive atmosphere, especially in levels such as Xterrier Research.

And so concludes my look back on Dissolution's development and release. It was a mod that consumed an absurd amount of my personal time. A mod that was successful in many regards and less so in others. It was a mod that drastically changed my approach to game design, one whose experience still affects my work on titles such as Lunar Descent and Rescue the Princess. One of the common things I've heard said is that the mod is quite re-playable (due to its simple gameplay), so maybe you'll take this chance to fire it up again and give it another go. After all, it's nearly three years since it was released.

An excellent finish to this very interesting and insightful series of articles. I can hardly believe that it has been 3 years since it was first released, feels like it was only yesterday that I first played it, so I'll have to get it installed again at some point!

I wish you all the best for Lunar Descent.

Thanks for commenting! Redfield is always open to being continued, though I have currently no plans. Dissolution is, however, definitely finished. Any improvements I have in mind for Dissolution will be felt in Lunar Descent, as enough years have been spent on that one project.

Another interesting article and a nice way to finish the series. Dissolution sounds like it was well received with a community rating of 74% and with 56% of players giving it 8 -10. Do you have any intention of retuning your old mods such as Redfield or expanding on Dissolution after you have finished with Lunar Descent?

On the point regarding Redfield and Crows merging into Dissolution, it seems to be a trend with all mods. HMS Defiance 2 consumed Guardian's assets; Lunar Descent has consumed Adverse's and Veil's.

Excellent post to finish the series. I would agree on your list of strengths and weaknesses on the mod and that Dissolution is definitely your finest mod. Your mod quality has been stepping up with each mod with HMS Defiance 2 and Dissolution being the most notable advancements in quality. I look forward to Lunar Descent and from what I have seen, it is another step up in quality.

Nice post! I remember Redfield and Crows well. Interesting how both went on to become part of something else.