Greetings, ‘The Hellbound Heart’ is a horror novel by renowned author Clive Barker and is probably better known by the name of its 1987 film adaptation and its numerous sequels, ‘Hellraiser’. The relatively short book was written in 1986, one year before the movie’s release, and the film remains fairly faithful to its literary source but does contain some key differences. Some of these discrepancies include name changes to major characters and characters having alternative relationships to each other. In the original ‘Hellraiser’ movie, some of the main cast include Ashley Laurence, Claire Higgins, Andrew Robinson, Sean Chapman and Doug Bradley.

The book starts with Frank Cotton, a hedonist on the lookout for sensual pleasure, who believes that he has experienced all the joys the world can give him. As such, he follows rumours of the Lerchand Configuration which is a puzzle box that is said to open up another realm of unfathomable sensation. This realm belongs to the Cenobites, beings who participate in disturbing sexual activities that mesh pain and pleasure. Frank, after tracking down the puzzle box in Dusseldorf, brings it back to his grandmother’s home in England where he manages to solve the puzzle. He comes face to face with the outlandish appearing Cenobites who take him back to their horrific dimension after he agrees to go with them. The Cenobites warn Frank that he can’t escape their pleasurable torture after he accepts their offer. Sometime later, Frank’s brother, Roy, and his wife Julia move into the same house that Frank disappeared from. 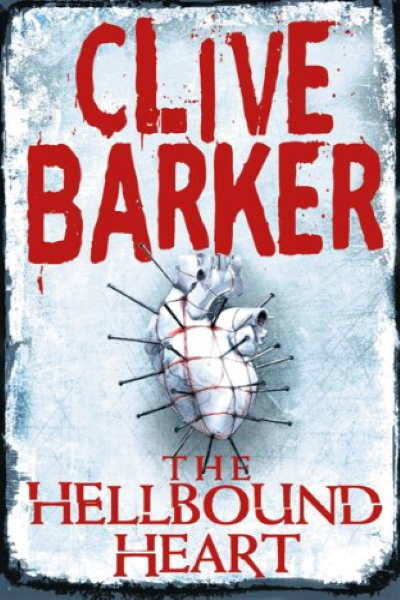 Julia and Frank had engaged in an affair a week before her wedding to his brother. Julia had never stopped wanting Frank and her relationship with Roy was beginning to suffer as a result of these longings. While Roy was in the attic, the room in which the portal opened, he managed to cut himself accidently and his blood spilled on to the floor. This blood allows a zombie-like Frank to return to Earth, escaping the Cenobite realm, in a much weakened state. His presence attracts the attention of Julia and Frank, in spite of his horrific appearance, eventually manages to inform her of what had happened to him. He explains what he needs to return to his normal form, bodily fluids and blood, and manages to seduce Julia into brining men into the attic to kill them for his benefit. As this is going on, one of Roy’s friends, Kirsty, begins to suspect that Julia is having an affair behind her husband’s back and she decides to investigate into it further.

I enjoyed this book but I believe watching the movie first helped me understand what was going on with the more surreal moments. Two more sequels were written, which I haven’t read, although they were published much later on from the first one. These are ‘The Scarlet Gospels’ which was published in 2015 and ‘Hellraiser: The Toll’ in 2018. Aside from ‘The Hellbound Heart’, Barker is also known for penning ‘The Forbidden’ which was later made into the horror film ‘Candyman’ in 1992 with Virginia Madsen and Tony Todd. This film, like Hellraiser before it, also spawned further instalments.

Well, thank you, pal. The day I get out of prison, my own brother picks me up in a police car.

Nicely reviewed. I actually hadn't realised there was a book relating to the film. Barker is a writer I've meant to check out for some time. This might be a good place to start due to my familiarity with the film.

Nice review. I enjoyed Hellraiser. I thought it was quite unique. The book sounds like a good read too.

Clive Barker strikes me as quite a big name, but Hellraiser is the only thing associated with him that I've seen.