A Clockwork Orange is a dystopian novel written by Anthony Burgess. It is written from the perspective of the protagonist Alex, a juvenile delinquent who roams the streets in the nochy (night) with his droogs, causing chaos for the few remaining decent lewdies (people) of his town. 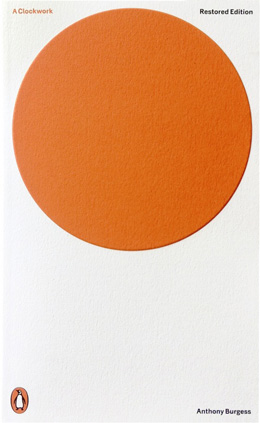 The novel is written in Nadsat, a fictional teenage argot that's part-English, part-Russian, part-rhyming slang. Because Alex speaks in this language, and Alex is our narrator, the entire world and his thoughts on it are filtered through it.

The novel is divided into three parts, each seven chapters long. They takes us through three key stages in Alex's early life: his street life, his imprisonment and, finally, his post-prison / reformed life.

This book has been on my to-read list for a long time. I was always fairly put off by it for years owing to its criminal, psychopathic protagonist. I tend to find narrators this far on the anti-hero spectrum somewhat unappealing to read.

Alex is as evil as they come – without batting an eyelid he commits robbery, assault (or tolchocking), rape and eventually murder. These events are recounted entirely from his completely remorseless perspective, and yet he’s a character that’s utterly fascinating and engrossing. I think a large part of this is down to his use of Nadsat.

The Nadsat language was partly created to add a buffer – to shield the reader (or perhaps the censors) from the brutality of Alex's deeds. It does this very well, but it also makes the narrator – who refers to himself as ‘your humble narrator’ – almost endearing. Something about his creative, uniquely expressive way of retelling his antics and thoughts is undeniably compelling, despite the barbarity of what is often being described.

There tends to be two aspects of Clockwork that are commonly criticized – the brutal violence, naturally enough, and the book’s ending.

The criticism relating to the ending – that the last chapter (part 3, chapter 7) doesn't fit well with the rest of the book – is not one I personally agree with. Burgess supposedly chose 21 chapters for this book deliberately, and described the book as being about adolescence (21 being for some the end of adolescence). He wanted to capture the wildness of the formative years, and the eventual growing up and out of extreme youthful destructive tendencies. I felt this to be spot on. While few of us had adolescent years quite as extreme as Alex's, I think many of us can look back on the period with some regret and bafflement.

I loved A Clockwork Orange, and I can easily say that it is one of my favourite reads ever. The novel is very darkly funny. After the first part, the 'ultra-violence' takes a backseat, and the novel puts Alex through his paces. His reaction to these encounters can be very amusing. I had concerns about the language going in, but they were unfounded. Owing to clever writing, it's surprisingly quick to pick up Nadsat – which has a wonderful character that undoubtedly makes this novel stand out from others. While barely noticeable, the author does a remarkable job at slowly introducing, bit by bit, the language and its vocabulary, so that by chapter 2 or 3 you'll be more than able to grasp what's being said. The language lends a timelessness to the book. I've read a few books, written in roughly the same era and set in the future, such as Brave New World. They often feel like dated science fiction, with jarring references that immediately age them. Thankfully, Clockwork avoids this and feels fresh and original all these years later.

I highly recommend this one to anybody who enjoys dystopian novels and dark comedy.

The film adaptation and book complement each other very well, in my view. Definitely worth a read.

Nice review. This is one I'll maybe need to check out at some point. I really like Kubrick's film adaptation, and the book sounds like a really good read that you both really enjoyed.

I watched the film a few weeks after reading the book and I really enjoyed it. It was surprisingly faithful to the book, though managed to strike it own notes too.

Nicely reviewed. A Clockwork Orange was certainly one of the best books I have read in the last few years so it was good to hear that you liked it as well. The use of Nadsat makes the novel feel very unique and, while it may be a little off putting for some, I found that figuring out the meaning of the words was part of its charm. I know Anthony Burgess wrote other novels during his writing career but I haven't read them myself and they wouldn't have the same level of recognition in popular culture as this one.

While I understand why some would prefer the more optimistic British ending, I think the American conclusion is the better option in my opinion. The rest of the book was so dark in nature that I thought a bleak ending suited it well. If you haven't done so already, you should check out Kubrick's adaptation which was a source of great controversy back during its release. Malcolm McDowell does an excellent job of portraying the psychotic Alex DeLarge in it and the film is fairly close to the book's plot as far as memory serves.