You can read the previous part here.

In 2009, work began on a mod called Inspection, which harvested the setting and basic premise of Dissolution. I quickly renamed it to Dissolution as it bore many similarities to the old mod and the idea of releasing my old, unfinished mod was very appealing.

I had learnt a lot since 2006: I could create better-looking textures, I could create weapon models, I could program. I also had a lot of different ideas for gameplay, which I was completely lacking in during the development of Dissolution in 2006. 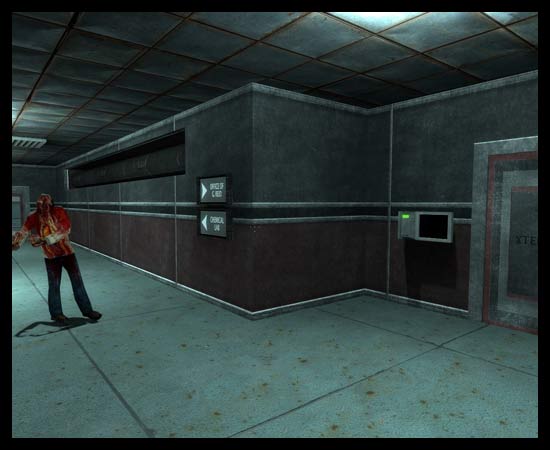 The screenshot above shows one of the early levels developed in 2009. One of the things that might strike you, if you've played Dissolution, is how similar it is to the final version of the mod visually. The wall textures, the doors, the signs, the keycard reader -- these things were created in 2009 and were to stay the course.

One thing that did not stay the course is the Half-Life 2 zombie. This is just one area where the mod was radically different from the version that was finally released.

The gameplay at this stage of development was largely inspired by the Penumbra adventure games. Dissolution was to be a puzzle, survival horror game with a mysterious plot. You would acquire weapons later on in the game but for this particular level, the player would have to avoid the zombie while solving a puzzle. 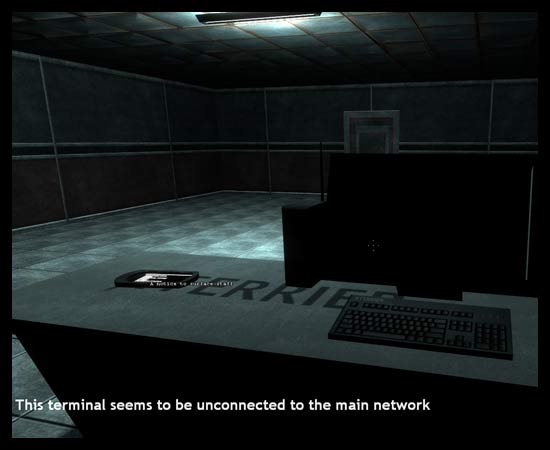 This developed an important focus of the mod: exploration. In this stage of the mod's development, the player could interact with almost any artefact in the game (computers, blood stains, locked doors) and get the avatar's thoughts on those artefacts (as shown in the screenshot above). This was a vital story-telling mechanic, allowing me to tell the story through environment details alone. It also served a gameplay role; in order for the puzzle gameplay to work, I had to encourage players to interact with the various items around them.

The approach to level design had completely changed by this point. Up until 2009, all my mods had approached level design in a fairly simplistic way: create rooms and paths the players must go through and dress them up to look like real places... or real-ish places.

Dissolution, from the outset, broke everything into sectors / areas. Each area was a self-contained area, designed to be functional in the context of the universe. The areas were designed with the usability of the (in game) characters in mind. So, there were offices and side rooms but there was no series of rooms that your progressed through linearly. There was no path, the only guidance for the player was a consistent objective: find the exit airlock for the sector. 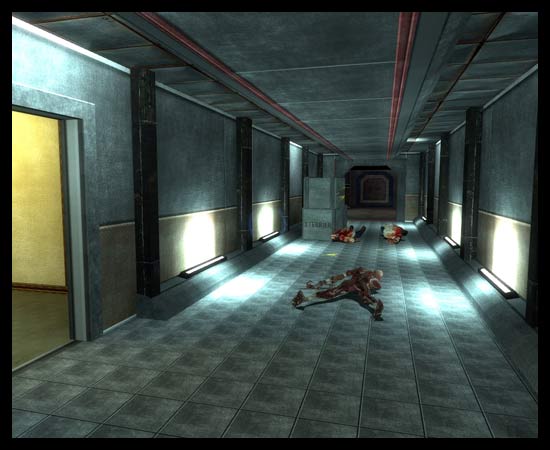 Levels could be developed independently and in any order. The order of the sectors could be (and were to be) swapped around as my plans evolved. Each level started and ended with an airlock (the same airlocks that were in the final version of mod, interestingly), taking inspiration from the lift at the start and end of every level in Alien Trilogy.

The airlocks, the train/tunnel level, the textures and art style, the 3D models; all of these things remained until the final version of the game. The game itself, however, changed completely.

The back-story remained: Earth was uninhabitable, Xterrier was the only reason humanity was still alive, you were on the far-out Xterrier colony (Xterrier 581c) and you were alone save for a guiding voice (Dr Wilson).

The locations, plot and gameplay were that of an entirely different game, however. Locations included lavish hotels, sprawling entertainment complexes and massive golf courses. The scale of the levels was huge in the 2009 version... but instead of grand, they were instead massively disproportioned. A screenshot below shows the insanely large bowling alley. 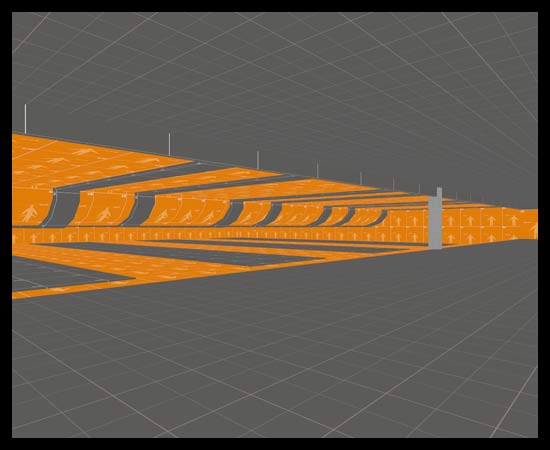 The player height markers on the walls will give you an idea at just how large the alley was.

The story was also more Resident Evil than System Shock. A gas agent, produced by Woodrow Bell (for who-knows-what reason) was sprayed throughout the colony... turning everybody into zombies (except the player, Woodrow Bell and Wilson).

Somewhere along the lines, the adventure game (with zombies) began to transform. It became more DOOM-esque in gameplay, more System Shock-esque in level design. The 2009 and 2011 versions may look very similar, but the fundamentals would change completely.

In the next part, the final part in this series, I will discuss the final push to releasing Dissolution.

Thanks for commenting! The design process did change drastically in the HMS Defiance 2-Dissolution gap, but it has changed even further in the Dissolution-Lunar Descent one.

Interesting read lad. Its interesting to see how a few years of practice can really change how went about creating dissolution - with stuff like level design etc. Nice to see a few never before seen screen shots too :). Looking forward to part III.

Thanks for the comment, the final part should be up within a week or two!

Excellent article, I remember all of the stages of the mod's development that you referred to. It's very interesting to see how much everything has changed. Nice post, I look forward to the next one as well!

Just about every game I love influenced Dissolution in some way or another. The only strong, direct influence from BioShock (that comes to mind) was the Tallstick sequence in the final product. All the things people brought up as being from BioShock (audio logs, isolated community etc.) bore far more similarity to games like Doom 3, in my view.

Another good article. It is interesting to see how the mod improved throughout the years of its creation and where it would eventually head towards. You also talk about many inspirational materials such as the Alien trilogy and Resident Evil but I noticed BioShock wasn't listed. In Mod DB's comments a few players spoke of similarities between Dissolution and BioShock. Did BioShock's style influence the mod in anyway?