The Offing is a coming-of-age novel, written by Benjamin Myers. Set just after the Second World War in England, a young 16-year-old called Robert from a coal-mining town decides to experience what life has to offer before beginning his life stint down in the pit. He travels down south, and in his travels comes across Dulcie, an elderly woman who lives alone in a small cottage. 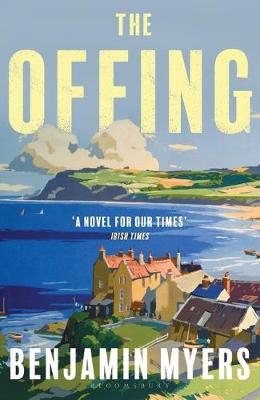 Dulcie and Robert fall into a comfortable routine, Robert helping Dulcie out with various neglected maintenance tasks about her property, and Dulcie repaying him by teaching him all about fine dining and literature (and especially poetry). The vast majority of the novel focuses on the budding friendship between this unlikely pair.

The friendship was certainly the highlight of the book. I liked Robert’s characterisation and found his desire to escape a life of drudgery – the life his father and his father’s father lived, a life he has seen firsthand and dreads – is easy to relate to. As is his appreciation for poetry and literature, as nurtured by Dulcie.

The friendship isn’t the only noteworthy aspect of the novel. The novel’s east coast setting, practically a third character in its own right, is stunningly drawn out. The novel crafts wonderful images of the natural world, a vibrant, alive place that’s contrasted with the turgid, dull town Robert has escaped from. While sometimes The Offing goes overboard in its descriptions, sometimes even comically so, there’s no doubt that I was left with many memorable images.

But the novel wasn’t without its flaws, and my least favourite aspect is Dulcie herself – perhaps a surprising thing to say, given that her friendship with Robert was such a highlight. I suspect, with little doubt, that the author absolutely loved Dulcie, and believed his readers would too. She’s an elderly woman who shirks all responsibility, preferring to be a kind of independent free spirit. She drinks an obscene amount of wine (and brandy), she wears trousers (how shocking!), she has strong opinions against things like government, marriage, convention and even time keeping. She purportedly hates inane small talk, but has no problem launching off on multi-paragraph monologues laden with pseudo-philosophical ramblings, the unoriginality of which would embarrass a sixth former. To me, she wasn’t a character, really, but a stereotype. She felt like a Guardian journalist’s fantasy – with all boxes in the checklist ticked – rather than a real, living, breathing person.

A central character being as terrible as Dulcie is a big deal. Usually, a novel lives or dies for me on its characters alone. And yet, I managed to finish this one, and not only that, I enjoyed it. I got to the end and was glad for having stuck with it. Does Dulcie improve? Does she develop into a proper person? Nope. If anything, some of her most eccentric, silly moments – such as the fact she apparently stores cars around the country in barns – come after the midpoint of the novel. But despite the somewhat predictable and unrealistic characterisation, the novel’s central relationship held my interest.

I would say this novel works particularly well as a summer novel, and might be of interest to fans of coming of age, but it’s not without significant flaws.

I can't say that I have heard of this particular novel before nor am I familiar with the author or his other works but 'The Offing' sounds fairly different. It certainly appears to be a vastly different book to 'A Clockwork Orange' which you finished recently. A change in genre is always nice a now and again to keep things from getting stale.

The time period itself, taking place just after WW2, is not a setting I have seen explored very much in fiction but that could be just down to a lack of exposure on my end. It is interesting that you managed to read the book to the end though and came away with mostly positive opinions on it. If one of the major characters is as unlikeable as you pointed out, it would be a big problem for most readers.

Nice review. I hadn't heard of this one before you'd mentioned it, but I don't hear about a lot of books.

The premise sounds good - and some of the ideas sound good too. It sounds perhaps a bit forced or cliched. Based on what you've said, it seems like a bit of a hit-and-miss book. Given the amount of less-flawed books that I have yet to read, I'm not sure if I'll ever get checking this one out, but there does sound like there is a decent story within the book.