Birdman or The Unexpected Virtue of Ignorance

Greetings, Birdman or the Unexpected Virtue of Ignorance is a 2014 film starring Michael Keaton as the main protagonist. Other notable cast members in the movie include Zach Galifianakis, Edward Norton, Naomi Watts and Emma Stone. The dark comedy was directed, co-written and produced by Alejandro Gonzales Inarritu. Aside from Birdman, I am not familiar with or have not seen the previous works of Inarritu. It is an unusual film as it is mostly filmed in one location, a Broadway theatre called the St. James Theatre in New York. The main aspect that convinced me to watch it is how the film is presented to the audience. The camerawork appeared to be one continuous shot as it follows characters around the set and when they interact with each other, it will break off from the actor to focus on another actor’s scenes.

The plot is rather a simple one. It follows the story of Riggan Thomson, a washed up actor with obvious mental issues that deteriorate throughout the film, as he tries to reinvent his career and rebuild his life. Thomson was known for playing a widely popular superhero known as Birdman a few decades earlier in a blockbuster series. It is a clear parallel with Keaton’s Batman from 1989 and 1992. Riggan occasionally hallucinates in the storyline as he can hear a disembodied voice prompting and tormenting him to return to the Birdman series. He also imagines himself as having supernatural abilities such as telekinesis and the ability to fly. The protagonist ignores the voice as best as he can as he tries to convert Raymond Carver’s ‘What we talk about when we talk about love’ into a stage adaptation. While trying to work Raymond also suffers with his family life as his daughter, Samantha, struggles from a drug addiction. 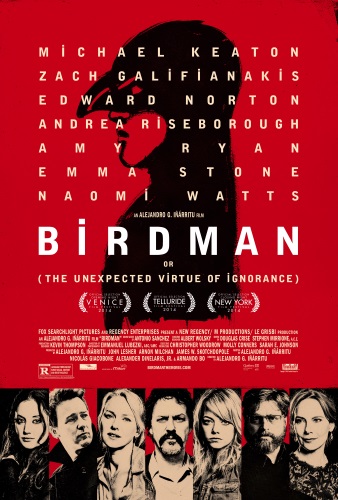 The talented but excessively unpredictable actor known as Mike Shiner is recruited as a main member of the cast as he would attract an audience to the theatre. While acting out the play on preview night Mike gets drunk on stage and ruins the play in front of a live audience. The event causes a rift in the relationship between Thomson and Shiner that continues to grow into open conflict, putting a strain on the production. Relations between the two are damaged even further when the media pays more attention to Mike than Riggan, which makes Thomson jealous as the project was his way of returning into the spotlight. The plot progresses as viewers watch the protagonist fall further and further into an unstable psychological state as his life falling into tatters.

Birdman has little music in it bar a continuous drumroll and a few scenes were classical music is played in the background. The Unexpected Virtues of ignorance is not a film everybody is going to enjoy as it is rather slow paced with little plot to keep it going. After having seen it I’m not sure what to think about it as it contained some interesting, new ideas but also had aspects that I didn’t enjoy. For instance, I believe it would have been better if some unnecessary scenes have were cut out in the final version. A more varied music selection would also have been preferable to the solo and monotonous sound of the drum kit. Despite this, the main draw that I found intriguing was how it was shot as if it was a continuous scene. Overall, I’m not sure if I would recommend it or see it again but I am glad that I did watch it in the first place.

I'm going to make him an offer he can't refuse.

Greetings, hope you are enjoying your holidays. This is just a short blog update to say that ‘William Litt: Legends’ is up on Write Wise. I first advertised the entry on the 15th February 2015, it was attached to the Sam and Max: Hit the Road review. The story was finally completed a few days ago and it consists of 14 chapters in total. It is my 21st entry on the site and my latest story since ‘The Death and Life of Ellen Smith’, which was released in December. Even though the challenges are no longer running, I still intend to write for the site occasionally with ongoing series or new entries.

The first Litt entry, named Corruption, was posted 4 years ago and it was my fourth entry for Write Wise. The sequel is much longer than the original as ‘Corruption’ was only around 3,500 words long. This story takes place several months after the last plotline ended and occasionally mentions William’s previous adventure. As such, ‘Legends’ revolves around new characters that hadn’t been introduced previously and the story mostly stands on its own. I will be back on the blog soon with more reviews and hope you enjoy my latest story.

Don't ask questions you don't want to know the answer to.