Greetings, the Republic Commando novels were one of the first blog updates I had done and the first book review on the blog. It was written by Karen Traviss and is a spin off the game Repulic Commando in which the main character is a clone of Jango Fett called Boss, you fight along other clones, who are brothers by the name of Sev, Fixer and Scorch. As a group they are called Delta Squad and fight for the Grand Army of the Republic against the Seperatists. The Clone troopers were created on Kamino by Kamonians, the clone genes had to be accelerated meaning the troopers age quicker than ordinary beings. There are four Republic Commando novels, Hard Contact, in which it is based on a planet called Qiilura. It follows Omega squad which is made up of Darman, Niner, Atin and Fi as they are sent to save a Jedi by the name of Etain and destroy a facility which is trying to create a nanovirus to kill clones. The factory is guarded by a Mandalorian Mercenary called Ghez Hokan. In the second book Triple Zero Omega and Delta squad work together to stop a terrorist group trying to destroy Coruscant the planet of the Republic. The book introduces new characters such as Kal Skirita and the Nulls,the Nulls are the earliest clones who the Kamonians wanted to kill as they were not as they wanted them to be. It also introduces Vau a training sergant who trainned Delta squad as well as others, Skirita trained other clones as well as Omega  squad.

In True Colours Omega squad are placed in a planet called Gariffakta to destroy sepreatists factories, they find out that Clones who deseret the GAR are who are getting too old are killed by Death squads. Etian and Darman have a child by this book but Kal Skirita does not allow Etain to tell Darman fearing that it coul distract him in battle. Kal Skirita and the Nulls try to find a Kamonian genetisicts by the name of Koi Soa to stop the acceleration in ageing. A Jedi in the first book quits the Jedi Order seeing that the Clone troopers should not be used. In the fourth book kal Skirita and the Nulls look for another way to stop the ageing as Koi Soa had killed herself. Omega squad had lost Fi as he had been injured during an explosion. Fi hides in the safe house on Mandalore as if the Republic new he was injured they would have killed him, another clone by the name of Corr becomes a member of Omega squad. Delta squad and Etain fight the Seperatisits on the planet Kashyyk, the home world of the Wookies. Kal Skirita finds out his daughter is in a Republic prisoner of war camp and tries to free the scientist who tried to kill the Clone troopers in the first book. He wants the scientist to stop the aceleration of ageinig and needs help from Jusik, the Nulls and Vau. Darman finds out about his child in the fourth book, Order 66 and Omega squad try to desert the GAR to the safe house on Mandalor with Etain, Kal Skirita, Jusik, the Nulls and Vau to enjoy the rest of their lives.

Ohh and praise be to God! Over the past few months I have had trouble with the computer meaning I had lost most of FRA serires 2. Anyway it is working again so now you can be annoyed by it, and the  second episode is up in Warehouse 17. 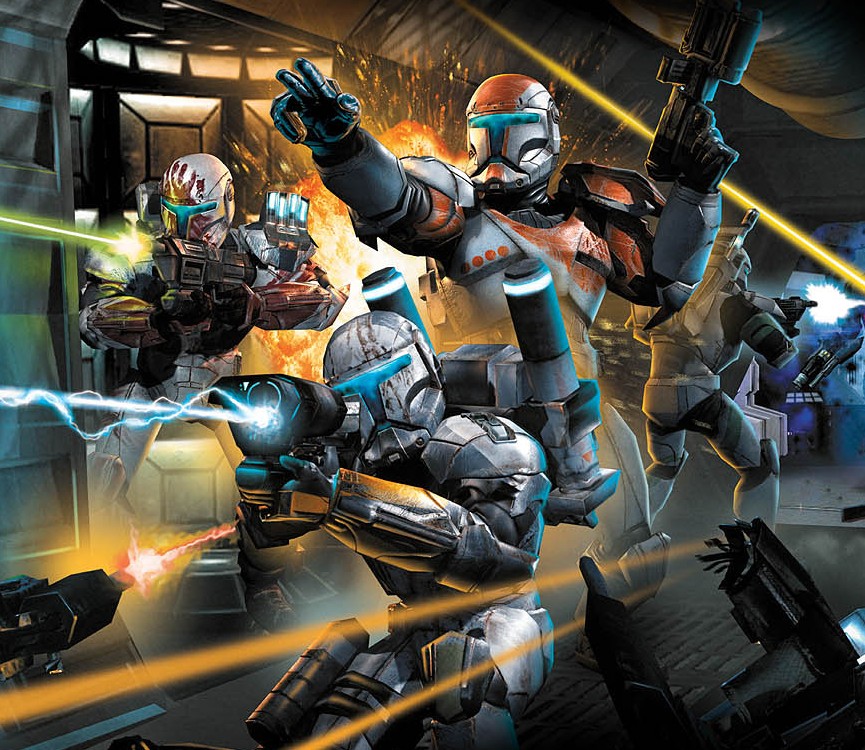 You are a part of the Rebel Alliance and a traitor!

Greetings, Shutter Island is set during 1954 on an island which contains a lunatic Assylum. The main character is a Marshal called Edward Daniels, he and a partner he had never worked with before are contacted to search for an insane woman who has managed to escape her room. Edward has other reasons to check out Shutter island, he calims that his wife was killed in a fire in their appartment by a mantinance man called Andrew. He searches for the escaped woman while trying to figure out a message she left behind and looking for Andrew. Edward suffers flash backs of a day when he broke into a concetration camp. The special effects are brillant and the story has some strange twists, to enjoy the movie you need to follow it carefully. "The Enrichment Center is committed to the well being of all participants. Cake and grief counseling will be available at the conclusion of the test. Thank you for helping us help you help us all."

Call of Juarez: Bound in blood

Greetings, sorry about the lack of updates. It has been a hard couple of weeks and will probably get harder. Anyway time for a review, Call of Juarez: Bound in blood is a prequel to the game Call of Juarez, there are two playable characters Ray and his brother Thomas. Ray and Thomas fought as the Confedrates in the American Civil war. During the last days of the war the Yankees had taken over land where the McCalls live which therefore has made their mother and other brother, William in danger. Ray and Thomas leave their positions to save their family, disobeying their orders means that the Confedercy fell and  Barnsbey, the leader of the Confederates who never let down their guns began to hunt them. Ray and his brother manage to save William but their mother had died in the night, when there home was destroyed they decide to repaire it by chasing a rumour of Gold. It is a brilliant game and would encourage anyone to play it, I also want to play the original as I hope it will be fun as well as the prequel.

Written on Friday 5 March 2010 by falcon