Greetings, Escape from New York is 1981 film directed and co-written by John Carpenter. Carpenter has made many movies during his career with the Thing, the Fog and Big Trouble in Little China being some of his most well-known works. Prominent actors in this film include Kurt Russel as the protagonist and former US Special Forces agent called “Snake” Plissken. Kurt would work with John Carpenter again in Big Trouble in Little China, another American film from the 1980s. Other performers including Lee Van Cleef as New York Police Commissioner Bob Hauk, Donald Pleasance as the unnamed President of the United States and Isaac Hayes as a criminal leader with the self-appointed title of Duke. The music was conducted by Alan Howarth who had collaborated with John Carpenter on various projects.

The plot is set in the late 1990s when the American government had already evacuated civilians from Manhattan, transforming it into an enormous maximum security prison after there had been a giant spike in the amount of criminal activity. The prison is walled off from the rest of the US and there is no potential escape routes for prisoners as the surrounding area is well patrolled by guards who engage in lethal methods to deter anyone from leaving. The President of the United States is travelling to a peace conference with the People’s Republic of China and the Union of Soviet Socialist Republics when Air Force One is captured by terrorists. The President is saved by his security when they lead him to an escape pod aboard the plane and launch it with him inside. The plane eventually crashes, as part of the terrorists’ plans, but the President is trapped in New York and carrying a brief case that contains an audio tape which describes the blueprints of a new weapon. 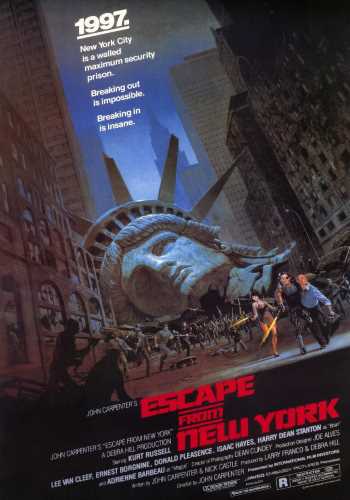 A squad of police are sent into Manhattan to retrieve the President but are met by the right hand man of the most powerful crime boss in the prison. Romero, on behalf of the Duke, gives the police a warning. He presents them with the president’s severed finger and his insignia ring, demanding that the prisoners are to be freed in 24 hours or the presidential hostage will be killed. At this point Hauk decides to offer Snake a deal. Plissken, convicted of attempting to steal from the Federal Reserve, will be given a presidential freedom if he returns the President successfully. The protagonist will be given a glider to enter Manhattan alone and undetected by landing on the World Trade Centre. Bob gives the anti-hero extra motivation once Plissken had agreed to the deal. To ensure that Snake wouldn’t try to escape, Hauk had him injected with microscopic explosives that will detonate within 22 hours unless he is given the antidote by the Commissioner.

Overall, I believe that Escape from New York has some interesting plot points that could have made it into a great movie but that it was let down in other regards. For instance, the dystopian future setting was intriguing but I feel that the movie faltered with unenthusiastic and subpar acting from some of the main cast. Additionally, there didn’t seem to be any character progression at all nor did I think any of them were particularly likeable. It is difficult to root for a character to win if you aren’t particularly interested in what happens to them or about the individual themselves. It should be noted that although I wasn’t overly struck on it, it has gained a cult following. A sequel titled Escape from LA was also released in the 1990s to mixed reviews.

A Storm of Swords

Greetings, A Storm of Swords is the third book in the Song of Ice and Fire series which was published in the year 2000. It was divided into two different novels called Steel and Snow as well as Blood and Gold, due to its length. The series was written by George R.R. Martin and it has a very extensive lore, numerous historical events that are relevant to the plot and a great range of characters. This vast amount of characters can cause the story to become complicated but it generally has several main points of view that are seen from Jon Snow, Daenreys Targaryen, Arya Stark, Davos Seaworth, Tyrion Lannister as well as a few others. Most characters do not have chapters dedicated to them and serve as secondary or territory actors in the storyline or are only mentioned in passing.

The plot begins shortly after the second novel ended as war ravages the seven kingdoms of Westeros with several kings fighting for the iron throne. The main challenges to Joffrey Baratheon’s crown are Robb Stark of Winterfell, Balon Greyjoy of the Iron Islands and Stannis Baratheon. Additionally, Daenrys is building her own forces by freeing slaves known as the Unsullied and adding them to her army as she makes her way to the seven kingdoms. Her dragons are an additional tool in her arsenal that she uses to terrorize those that oppose her. A different threat comes from the northern regions that are separated from the kingdoms by the Wall which is protected by the Nights Watch, an army of criminals and vagabonds defending the civilized against the Wildlings. The self-proclaimed king of the Wildings, Mance Rider, threatens to break through the wall with his enormous army of savages, supernatural beings and trained fighting animals such as mammoths. 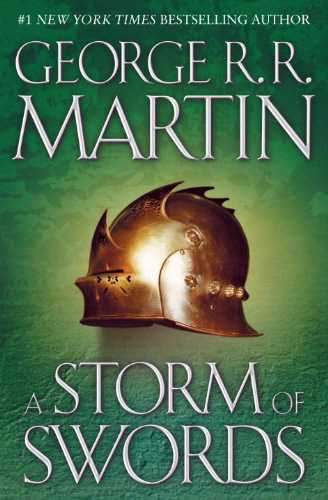 Balon Greyjoy is killed off at the beginning of Blood and Gold without any great details of how it happened. It is rumoured that he fell off a bridge during a storm but more sinister explanations are possible. Stannis, one of the kings, is informed by his priestess called Melisandre that she had seen in a vision that other competitors for the throne would also die as he was the rightful ruler of Westeros. In another storyline, Robb Stark had alienated the support of the Freys by marrying Jayne Westerling, and breaking his word to marry into the Frey Household. Cateyln, Robb’s mother, notes that it was a dangerous decision for her son to marry out of love instead of thinking strategically but she believes it is possible to re-secure the allegiance of the Freys via having her brother marry into the Frey family.

These novels are very difficult to summarize due to the great scope of the series and the many storylines that run through it. One of the aspects of a Song of Ice and Fire that I enjoy is the unscrupulous acts of betrayal and clever schemes that are devised by intriguing characters such as Tyrion or Little Finger. Another entertaining feature is that the reader can be taken by surprise at how quickly a character can be killed off in an unforeseen circumstance and it should be noted that death is a common occurrence in Westeros. While there are supernatural elements involved, they are barely touched upon and the narrative focuses on the wars between the different houses. I enjoyed these novels and look forward to the next instalment as well as eventually knowing who will end up on the iron throne.

I understand. You found paradise in America, you had a good trade, you made a good living. The police protected you and there were courts of law. You didn't need a friend like me. But, now you come to me, and you say: "Don Corleone, give me justice." But you don't ask with respect. You don't offer friendship. You don't even think to call me Godfather. Instead, you come into my house on the day my daughter is to be married, and you ask me to do murder for money.