Greetings, to coincide with Telltale’s ‘Tales of Monkey Island’, the much loved original from 1990 was remastered in 2009 for a new generation of gamers. It is a point-and-click adventure game which contains plenty of rather bizarre puzzles with whimsical solutions that the player has to figure out. Many of the main cast from previous instalments returned to provide their vocal talents to this remake including Dominic Armato who voiced the swashbuckling protagonist, Guybrush Threepwood. The music was composed by the original conductor as well, Michael Land, who most notably worked for LucasArts in titles such as Indiana Jones and the fate of Atlantis, Grim Fandango and Sam and Max: Hit the Road.

The plot begins when a young adventurer named Guybrush Threepwood arrives on Melee Island in his quest to become a well renowned pirate. He seeks out the most experienced and reputable pirate captains on the island who instruct him that Threepwood needs to conquer three trails if he is to become a legendary pirate. Guybrush sets out to complete the various challenges that were set for him, including defeating the mysterious sword master in arm to arm combat, locating lost treasure and stealing a valuable idol from the governor’s mansion. During his travels Guybrush learns of a fearsome ghost pirate, LeChuck, who was enamoured with the local governor of the island, one Elaine Marley, before his death. 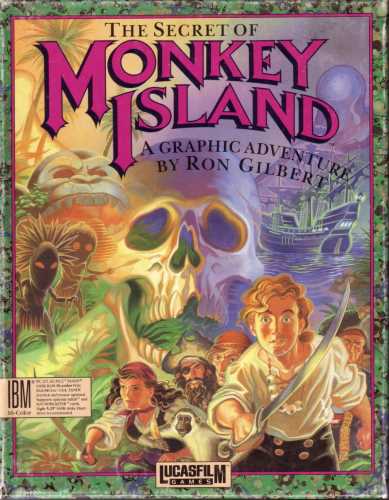 Threepwood encounters the governor while attempting to steal from the mansion and is quickly smitten with Elaine. When Guybrush completes all of his quests, LeChuck and his crew of undead pirates invade Melee Island and take off with Elaine to Monkey Island. Guybrush attempts to recruit a team to set sail towards Monkey Island, fight LeChuck and his spectral legion and rescue Marley. The call to arms isn’t well received as the hardiest of pirates are too frightened of the notorious ghost captain to lend a hand. Despite the setback, Threepwood manages to recruit three people to sail with him on the dangerous voyage. Carla the expert sword master, a brutish man named Meathook and a prisoner called Otis who was broken out of jail by the hero all agree to come to Elaine’s aid.

I really enjoyed this special edition. Its humour felt unique and it was interesting to play through the videogame, albeit remastered, that introduced these iconic characters to the world. The remake made some obvious changes from the original, including improving the graphics and having more detailed artwork but it also added voiceovers that the 1990 version didn’t have. To my knowledge voice actors weren’t used until the third title in the series, 1997’s ‘The Curse of Monkey Island” and 2000’s ‘Escape from Monkey Island.” I look forward to experiencing the other games in this series as I move on to playing Monkey Island 2: LeChuck’s Revenge: Special Edition in the near future.

The supernatural, the power of darkness — it's all true. The undead surround me. Have you ever talked to a corpse? It's boring! I'm lonely! Take your life, David. Kill yourself... before you kill others. Please don't cry. Beware the moon, David.

An American Werewolf in London