Greetings, the Man from U.N.C.L.E is a 2015 film based on an American television series of the same name that originally aired from 1964 to 1968. The movie was directed by Guy Ritchie, director of the 2009 and 2011 Sherlock Holmes series as well as Lock, Stock and Two Smoking Barrels. The Man From U.N.C.L.E stars Henry Cavil as an American agent named Napoleon Solo, Armie Hammer as a Russian spy called Illya Kuryakin and Alicia Vikander as a German mechanic known as Gabby Teller, as well as the daughter of a Nazi scientist Udo Teller. The music was composed by Daniel Pemberton who provides an interesting soundtrack that is accompanied with genuine 60s music, giving the movie a unique style that suits the feel of the film.

The plot begins in 1963 when professional thief and CIA agent Napoleon Solo attempts to extract Gabby Teller from East Berlin. The two manage to evade the clutches of Illya Kuryakin after being chased through Soviet territory and escape over the wall into West Berlin. Both the U.S.S.R and the U.S have an interested in Gabby as she is the daughter of Udo Teller, a Nazi scientist who later worked for America during the end of the war by experimenting on nuclear weapons. The intelligence services believe that Udo Teller has been forced to work for Alexander and Victoria Vinciguerra, a wealthy couple of Nazi sympathizers who wish to use Teller’s nuclear bomb for their own ends. As such, the two superpowers intend to use Gabby to get close to her father by way of contacting him through her uncle Rudi. Rudi is also working for the wealthy Vinciguerras as an employee in their fishing company. 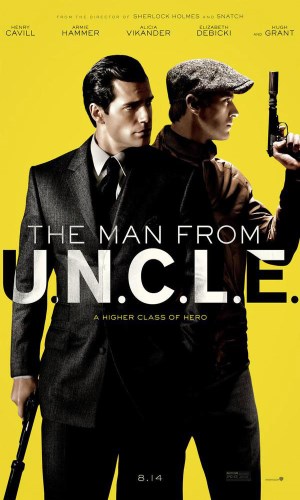 With the high stakes of the crisis, both the Soviets and the Americans agreed put aside their rivalry to prevent a nuclear war by forcing Illya and Napoleon to work together. Initially, the two agents are reluctant to work as a team due to clashes in their personality, ideological disputes and their preference to operate alone. Gabby Teller also plays an important role in their plan to locate Udo by pretending to be engaged to Kuryakin. The Soviet agent is undercover as a Russian architect and must earn Rudi’s trust in order to find the whereabouts of Udo Teller. Solo is also undercover as an antiques dealer and the trio deduce that they are being watched by the Vinciguerras when they arrive in Rome to begin their mission.

While I did enjoy this film I felt that the plot could have been stronger and that the villains could have been developed more as characters. Despite this critique, I found the Man from U.N.C.L.E to be an entertaining watch with plenty of humorous moments and some memorable action scenes, especially when the main characters were fighting each other at the beginning. While I’m unsure if there would be a sequel, I would be interested in seeing one as I believe that it has plenty of potential to generate an entertaining series. I would encourage you to watch the Man from U.N.C.L.E if you have yet to see it.

Greetings, Scarface is a mob film directed by Brian De Palma and was released in 1983 as a remake of the original 1932 movie. The most prominent cast members include Al Pacino of Godfather fame and Michelle Pfeiffer, a relatively unknown actress at the time in which this film served as her break out role. The music was produced by Italian composer Giorgio Moroder who relied heavily on synthesizers and electronic music in the soundtrack, giving the OST an 80’s feel to it. I felt as though some of the tracks that tried to build suspense were rather tacky but it didn’t detract from the entertaining experience. It should be noted that the Cuban accents were very heavy and difficult to understand during the beginning of the film but you get used to it as Scarface progresses.

The movie begins in 1980 with Fidel Castro shipping Cuban prisoners out from his country, claiming them to be against the spirit of the revolution. Among the immigrants are Tony Montana and his best friend Manny Ribera who have entered America, settling in Miami. While stuck in a refugee camp Manny finds a way to access green cards in order to enter America legally. He is hired by a wealthy American drug lord named Frank Lopez to assassinate an ex-government official of Castro’s regime who is also hiding in the migrant camp. Once the official is murdered by both Tony and Manny, the two are given their green cards which gives them the right to live and work in the United States in adherence to the law. 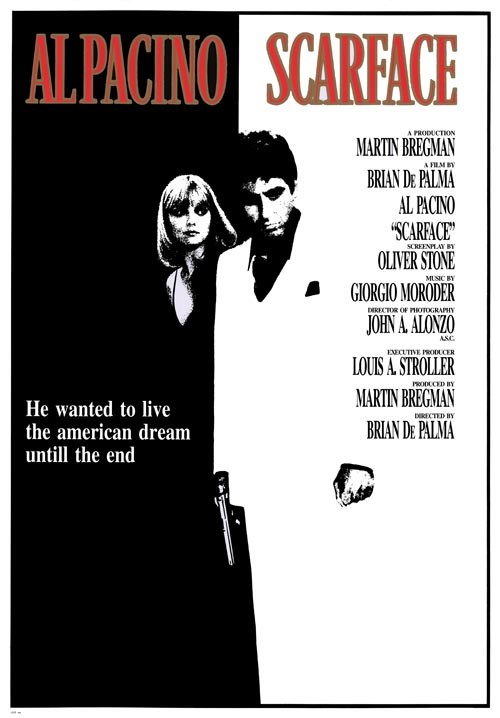 The two protagonists are drawn further into a life of crime when Montana attempts to purchase cocaine from Columbians on Frank’s behalf. The deal was revealed to be a trap and resulted in Angel, one of Tony’s friends, being killed but the Columbines were massacred by the main duo. After the failed negotiations Tony and Manny make off with both Lopez’s money as well as the narcotics to meet with Frank personally. During the meeting, Montana briefly meets Franks’ girlfriend and is instantly infatuated by her the moment she makes her introduction. The gangster’s moll, Elvira Hancock, is portrayed by Michelle Pfeiffer as a bored drug addict as well as a trophy girlfriend. Frank Lopez is impressed by Montana’s nature and offers the two characters full time employment in his criminal empire. At the beginning of the movie, Lopez believes that Tony could be controlled despite Montana’s wild character and excessive ambitions. The plot also tries to highlight Tony’s familial problems that stem from his criminal occupation and his mother’s disdain for his violent actions.

Overall, I did enjoy this classic film and felt that it was worthy of its status as a pop culture phenomenon. I would encourage you to watch it if you aren’t adverse to scenes of a violent nature, profanity, drug taking and nudity but keep in mind that these scenes are quite pale in comparison to the standards of modern entertainment. The series has spawned a few videogames surrounding the titular character such as the 2006 one named ‘Scarface: The World Is Yours’. There are also currently negotiations in process to get a sequel made. It would be set in modern day Los Angeles as a Mexican immigrant chases the American dream through building a criminal empire. Although it is too early to tell what to expect from the film, I am looking forward to what a modern sequel to Scarface would entail.

You don't believe in the Force, do you?