Greetings, Stranger Things is a 2016 horror and supernatural series from Netflix that was written by the Duffer brothers. Winnoa Ryder, of Beetlejuice, Frankenweenie and Edward Scissorhands fame, is probably the most well-known cast member involved in the show. Other actors and actresses of the large cast include David Harbour, Finn Wolfhard, Millie Bobby Brown, Gaten Matarazzo, Caleb McLaughlin, Natalia Dyer, Charlie Heaton and Matthew Modine. Many of them would be unknown as a large portion of the leads are child actors whose careers are just beginning. The OST was conducted by Kyle Dixon and Michael Stein, who give the series a distinct feel that is reminiscent of the 1980s, the time period in which this is set. Accompanying the Original Soundtrack are well chosen songs from the decade that are the works of bands and artists including the Clash, Foreigner, Echo and the Bunnymen, Moby, Corey Heart and Peter Gabriel. The tracks fit the series nicely and are well placed for dramatic effect throughout its arch.

As already stated the plot takes place in 1983, in a small American town of Hawkins. The opening scene begins with a panicked scientist fleeing an unknown and unseen creature before he is quickly killed off by his pursuer. The story then introduces four of the main lead characters, four young boys, playing a game of Dungeons and Dragons. The children are named Mike, Will, Dustin and Lucas. When the game is over, three of the kids have to cycle to their own homes at dark. One of the boys, Will Byers, is on his way home when he catches a glimpse of the monster. He abandons his bike to run straight back to his empty house as his mother and older brother are at work. Will locks himself in his shed, hoping it will protecting him from the predator, but he vanishes after the overhanging light flashes and the creature finds him. News of Will’s disappearance begins to spread after his mother and brother, Joyce and Jonathan, notice that he isn’t in the house by morning. A desperate Joyce seeks the help of local law enforcement by meeting with Chief Jim Hopper. Hopper is initially unconcerned by Will’s absence as he notes that Hawkins suffer from very little crime but he eventually forms a search party for Byers after he fails to find the kid himself. 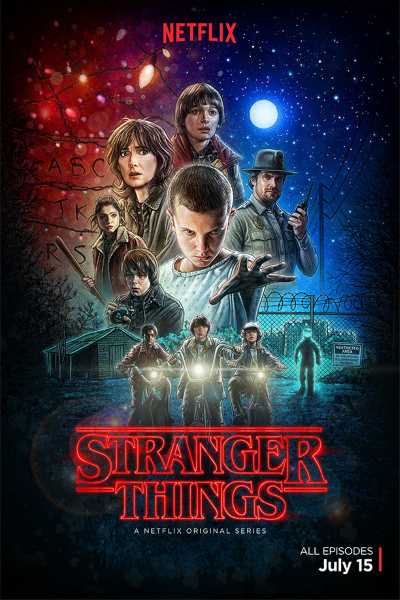 The following day after Will encounters the creature, a young girl wearing a hospital gown and sporting a shaved head, turns up at a local diner. She sneaks into the building to steal some food but she is caught in the act by the owner, a man named Benny. Benny, despite his initial anger at having his stock stolen, begins to feel sorry for the kid who he believes had been abused by her parents. He tries to get her to talk but he is mostly unsuccessful as she isn’t particularly talkative, leading him to call social services. The owner answers the door to a woman pretending to be a social worker before he is promptly shot dead by his visitor. Seeing this, the girl flees the area and manages to escape the woman as well as her armed colleagues that had been sent to capture the child. Benny’s death is then staged to look like suicide in order to remove any suspicions about his death. Jim Hooper investigates the scene and begins to wonder what is happening in what was a peaceful town until the past few days. The storyline further develops when the three main children go looking for their friend at his last known location in the forest and unexpectedly meet the girl in her hospital gown.

Overall, I really enjoyed this series. It has quickly become one of my favourite shows despite only having eight episodes to catch my attention with. Everything from the music to the interesting and complex characters, seems to meld together perfectly to produce an excellent show. The characters and their relationships, even minor characters such as Barb or her friendship with Nancy Wheeler, are particularly interesting aspects of Stranger Things. Nancy and Jonathan Byers complicated relationship was also a highlight, especially since it seems to have ended differently than I had expected at the series finally. I eagerly anticipate the next season to see how certain storylines will be concluded and uncovering the mysteries to many of the finale’s scenes.

Willy Wonka and the Chocolate Factory

Dawn of the Planet of the Apes

Greetings, Dawn of the Planet of the Apes is a 2014 film and sequel to the Rise of the Planet of the Apes, a 2011 reboot of the original series. I should point out that I am not overly familiar with the source material but have a basic understanding of the main concepts. While I have yet to see Rise of the Planet of the Apes, I am aware that most of the human characters are only introduced in this instalment as opposed to some of the apes who are present in both movies. For instance, Andy Serkis reprises his role as the leading figure of the evolved apes, a common chimpanzee called Caesar, while Jason Clarke as a primary human character is a new addition to the series. Other cast members include Gary Oldman, Toby Kebbell, Keri Russel and Kodi Smit-McPhee. The music was composed Michal Giacchino who has conducted scores for many well-known films including the Incredibles, the Star Trek reboots and Up.

The plot begins 10 years after the events of the first instalment in which a simian flu plunges the world into chaos, civil unrest as well as conflict is rampant and the virus kills 99% of the human race. Caesar leads his fellow enhanced apes and builds a primitive civilization as the remnants of the human world crumbles around them. Among the colony are various types of apes including Maurice, a Bornean Orangutan, and Koba, a bonobo that harbours a deep hatred for humans as a result of his days as an experimental subject. Despite, Caesar’s beliefs that all of humanity had perished in the last decade, the apes and humans once again make contact. Malcolm, a human, leads a group of survivors into ape territory in a mission to start a hydroelectric dam and produce power as the nearby human settlement is running desperately low on fuel. 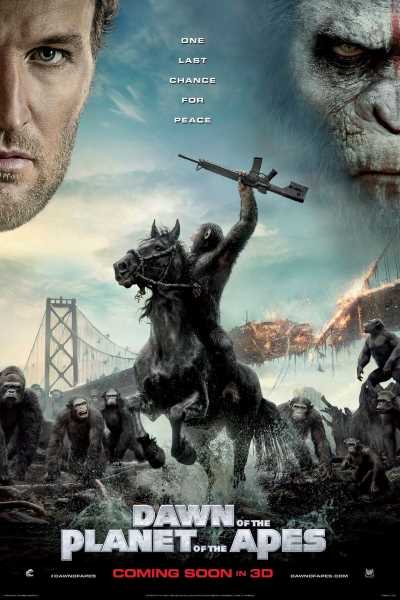 A startled human by the name of Carver was the first to encounter two apes while on his way to the dam. One of the creatures he meet was Blue Eyes, Caesar’s son, and his childhood friend Ash. In a panicked state Carver shoots Ash and ends up wounding him but it does not prove to be a fatal injury. The rest of the human survivors soon catch up with Carver in the jungle but are also trapped when Blue Eyes calls for help. Caesar and his loyal tribe make it to the scene, outnumbering Malcolm’s group. Once Caesar is aware of their presence and that they had injured Ash, he orders the humans to leave and vocalizes the instruction. The humans are amazed at the development as they were unaware that the apes had evolved to the point of being capable of basic speech. They heed the order nonetheless and flee back to their settlement but are followed by Koba as per Caesar’s instructions.

Overall, I enjoyed this film even though I hadn’t watched the other movies in the series. I plan to at least watch the first reboot as it will be interesting to see Caesar’s origin story. Dawn of the Planet of the Apes strangely manages to pull off some touching scenes and bring across important themes which aren’t diluted by the absurd concept of monkey’s taking over the planet. The charismatic character of Caesar was also a highlight of the movie and it was interesting to see his futile attempts to stop the unnecessary conflict even as it becomes clearer that war is the inevitable outcome. Serkis had delivered a stellar performance in the role, making Caesar seem quite ape like and at times quite human too. I look forward to seeing the upcoming third movie entitled ‘War for the Planet of the Apes’ and where the future of this series lies.