Greetings, the Graduate is a romantic comedy film from 1967 which was directed by Mike Nichols who was also involved in various movies including Catch-22, Wolf and Postcards from the Edge. The picture, which was based on Charles Webb’s 1963 book of the same title, stars Dustin Hoffman as the protagonist Benjamin Braddock. Katherine Ross of Butch Cassidy and the Sundance Kind, the Stepford Wives and Donnie Darko, features in the Graduate as does Anne Bancroft who played the iconic Mrs Robinson. While there are other cast members involved in this work, the trio mentioned above are by far the most important characters as well as the most notable or prolific actors and actresses. The instrumental music was composed by Dave Grusin who also composed the OST for the Goonies and Tootsie. In addition, the American folk-rock duo, Simon and Garfunkel, wrote ‘Mrs Robinson’ for the film’s soundtrack.

The plot is fairly simple but it is still entertaining none the less. Benjamin Braddock, a shy 21 year old, has just graduated with a Bachelor’s Degree and is reluctantly attending a party in his honour which is being held by his parents. Benjamin attempts to evade the congratulatory comments and questions surrounding his as yet undecided future from his family and neighbourhood friends. The socially anxious Braddock retreats into his room where he hopes to be alone and hidden away from the large crowd downstairs. Mrs Robinson, long neglected wife of Braddock Senior’s law partner, enters his room during this time. Ben assumes she has come into his room accidently and informs her where the lavatory is but to his surprise Robinson is there for him. The older woman quickly reveals herself to be a cougar, flirting with the nervous Benjamin and admitting her attraction to him. He quickly rebuffs her advances with awkwardness but is somewhat titled by the idea of an affair and is drawn to her charms. In an attempt to seduce him further and get the graduate alone, Mrs Robinson explains that she needs Braddock to drive her home as she had been drinking that night. Benjamin hesitantly agrees to do so and hopes to get her out of his hands as soon as possible. 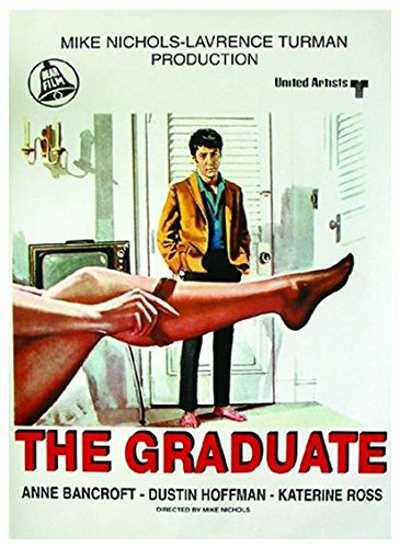 Mrs Robinsons commandingly orders the young man into the house as soon as they arrive despite his continuous protestations. She attempts to get him inebriated, explaining that her husband should be away for hours and even lures Ben into the room of her daughter, Elaine, to see the portrait of the young Robinson. A naked Mrs Robinson ambushes Benjamin in the room but is interrupted by the unexpected arrival of her husband into the home which gives Braddock an opportunity to escape. The attempted affair is narrowly avoided until a few days later when Benjamin gives into his temptations and clandestinely, if somewhat clumsily, meets Mrs Robinson in the Taft hotel where he is successfully seduced. The affair continues between the two for months until he is coaxed and pressured into dating Elaine by his parents and Mr Robinson’s consistent badgering. This is much to the fury of Mrs Robinson. Benjamin purposefully attempts to ruin the date with rude behaviour, engaging in reckless driving and deliberately humiliating Elaine by taking her to a strip club. A distraught Elaine flees the club and Braddock begins to feel sorry for the woman. He eventually catches up with his date and has a proper night out in which the two enjoy each other’s company. Benjamin eventually discovers that he has fallen for Elaine. He begins to plot out a way to retain the relationship and avoid the fallout from his previous affair with her mother.

Overall, I really enjoyed the Graduate even though I was aware of how it would end due to parodies of its famous scenes from television programmes such as the Simpsons. The film enjoys a lasting cultural status to this day and the infamous character of Mrs Robinson is now a synonymous term for a cradle-snatching cougar. While there were talks about a sequel and there is a follow up book by Charles Webb called Home School that it could be based upon, I am glad that one hasn’t produced as of yet. The film ended on an interesting twist that left the future of the characters open and wasn’t necessarily a happy conclusion. The Graduate is a film I would definitely recommend to those who haven’t seen it.