Greetings, A Clockwork Orange is a famous dystopian novel by Anthony Burgess and is particularly well known for the senseless violence contained within its pages and the controversial Kurbkick movie adaptation from 1971 that had drawn the attention of the British censors. The film, which is a must see for any cinephile, stars Malcolm McDowell as the sadistic and youthful protagonist Alex DeLarge who has a penchant for classical music. It follows the book’s plot very faithfully bar a few minor role changes. Interestingly, the original novel never provided the character of Alex with a surname and ‘DeLarge’ was an addition made by the movie that is based upon a line in the source material. Burgess continued to write for decades after his breakthrough novel but his other works never surpassed the reputation of ‘A Clockwork Orange’ in popular culture.

The plot begins in the near future. A future in which Britain has become a bleak nation rocked by escalating violent crimes that target society’s weak and vulnerable. One of those who commit this aggression upon the helpless, now called ‘ultra-violence’ by the authorities, is Alex and his small group of psychotic friends. Alex, a boy of fifteen, is the leader of his band of ‘droogs’ which consist of the tag along Pete, an ambitious Georgie and the idiotic member of the group who is named ‘Dim’ for his mental slowness. After drinking their ‘milk-plus’ which is milk laced with a narcotic substance at the Korova Milk Bar, the delinquents decide to have a night about the town. Their activities including terrorizing a homeless man, fighting a rival gang for the sake of it and joy riding a stolen car into an isolated area where they begin their next criminal acts. Alex tricks the inhabitants of a nearby cottage to open their door to him by pretending to be fatally wounded and in need of medical assistance. The door is hesitantly opened and Alex’s friends rush the woman who had let them in. The woman is horrendously coerced into sexual acts while her author husband is savagely beaten and unable to save her from the rowdy gang. 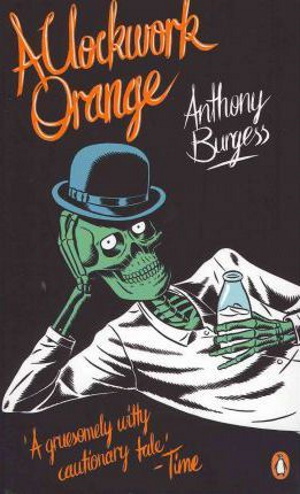 After some time it becomes apparent that Georgie has desires to become the new leader of the ‘droogs’ and proposes a new plan to rob the home of a rich and elderly woman. Alex quickly crushes the mutiny of Georgie and Dim by fighting the former and slashing the hand of the latter. In an attempt to smooth over the quelled insurrection, Alex agrees to Georgie’s plan and they all target the woman’s house. DeLarge successfully breaks in but has to knock the old woman unconscious as she had become aware of his unwanted intrusion. Alex unlocked the door for his fellow friends but is shocked to discover that the whole plan was a rouse against him. Dim vengefully strikes DeLarge as retribution for earlier and his former companions leave him to be caught by the police. Alex is hauled away by law enforcement and held in custody when he learns that he had actually killed the older woman as opposed to knocking her out. DeLarge is convicted of the elderly woman’s murder and is sentenced to fourteen years behind bars when news of an untested rehabilitation programme comes to his attention.

While the novel is relativity short, it may take the reader a while to progress through the book as it contains heavy use of the fictional language of ‘Nadsat’. The language is primarily English in nature but it involves some Russian vocabulary as well and is mixed with words that Burgess had invented himself. It is also topped off with Cockney rhyming slang which provides the first person narration with a very distinct style. There is a discrepancy between the length of the book in the original English publication, which contains 21 chapters, and the American version which omitted the last segment. This was because a more depressing conclusion was thought to be more palatable to US readers. Kubrick’s film followed the outline of the American publication and ends on a darker note than the more optimistic final chapter of the British one.

This is the first time anyone has ever sat next to me since I successfully lobbied to have the school day extended by 20 minutes!