Greetings, Parasite is a 2019 film which was directed by Bong Joon-ho who is known for his directorial efforts in ‘The Host’, ‘Snowpiercer’ and ‘Okja’ among others. The movie stars a cast of South Korean actors who are most likely unknown to international and Western audiences but includes Song Kang-ho, Lee Sun-kyun, Cho Yeo-jeong, Choi Woo-shik and Pak So-dam. The music was conducted by Jung Jae-il. The film received a lot of praise on its release and won numerous awards including the Oscar for the Best Picture of 2019.

The film starts with the impoverished Kim family living in a cramped semi-basement apartment known as a banjiha which is situated beneath street level. The family of four struggles to get by and fold pizza boxes as a way to earn some sort of income. A monetary opportunity arises when the son of the Kim family, Ki-woo, is provided the chance to teach English to the daughter of the wealthy Park family. Ki-woo’s friend, Min-hyuk, had previously taught the daughter, named Da-hye, but he will be studying abroad and referred Ki-woo to the family as his replacement. Ki-woo impresses Yeon-gyo, mother of the Park family, as he poses himself as a university student and is hired as Da-hye’s tutor. Once Ki-woo gains the trust of the Park family, he tries to get the other members of his own family to weasel their way into other high paying service positions at the household. 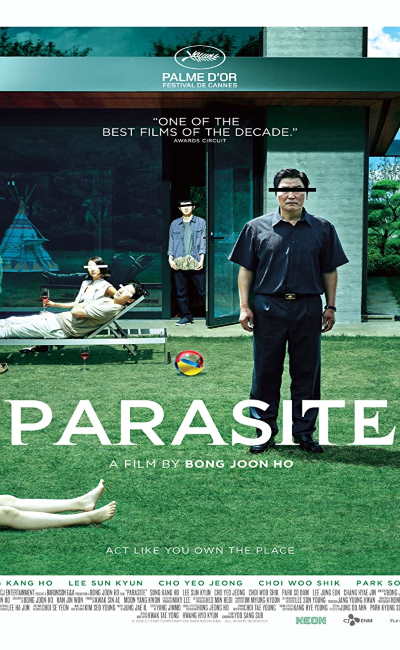 The first to do so is his sister Ki-jung. She sets up the false identity of Jessica, an art therapist, and hoodwinks the ditsy mother into believing that she should work with the ‘troubled’ son called Da-song. The father, Ki-taek, manages to secure the position of personal driver for the Park patriarch, successful businessman Dong-ik, by having the previous chauffer set up in a scandal of a suggested sexual nature as his daughter leaves her tights in the car one night. The mother also finds her way into the house by exploiting the peach allergy of the current and long serving house keeper, Moon-gwang, as the Kim family trick the Parks into thinking Moon-gwang has tuberculosis. One stormy night, the Parks decide to go on a trip and leave their luxurious house in the safe hands of their newest housekeeper Chung-sook. The Kim family takes advantage of the empty house but discover a secret about the home once Moon-gwang makes an unanticipated appearance at the doorstep.

I enjoyed this movie and despite having seen some of Bong’s films before, I was never too sure how Parasite was going to pan out in the end. While there are no plans for any sequel, there are currently talks of a television series being made for HBO. The series will have Bong and Adam McKay, known for Anchorman, Ant-Man and Vice, as Executive producers. The series will explore moments in between some of the scenes featured in Parasite. While I am sure that the television show will be well crafted, I have my doubts as to how interesting a series could be when it is set during a constrained timeframe and when the audience already knows what is going to happen.

He thinks we're us. Isn't that silly. We're not us. We're two other fellas. Aren't we?