Greetings, The Car is a horror film from 1977 that was directed by Elliot Silverstein who had also written for series such as the Twilight Zone and Tales from the Crypt during his career. The cast includes James Brolin as the lead protagonist, Captain Wade Parent, who is a police officer in a small American town. Brolin had previously had a major role in Michael Crichton’s film Westworld in 1973 and is also the father of the prolific actor, Josh Brolin. Other cast members include Ronny Cox, who played a large part in 1972’s Deliverance, Kathleen Lloyd, John Marley as well as the sister actresses Kim and Kyle Richards. The music was composed by Leonard Rosenman whose impressive list of work includes Rebel without a Cause, Barry Lyndon, the animated Lord of the Rings film, Star Trek IV: The Voyage Home and Robocop 2. While ‘The Car’ may not be a well-known horror title, I had first become aware of it due to an early Futurama episode called ‘The Honking’ which served as a homage to the film and it left such an impression on me that I was keen to seek the movie out.

The story begins in a remote American town where two young cyclists are out for a leisurely ride. A black Lincoln Continental Mark III with tinted windows travels up the dusty road behind them. It soon becomes apparent to the cyclists that the car isn’t going to overtake them but is menacingly toying with them instead by ramming their tires with its bumper. Things take a more sinister turn for them as the vehicle becomes increasingly hostile in its pursuit. The car crushes one cyclist against a wall and forces the other over a bridge, killing the rider in the fall, before speeding off under a tunnel. The mysterious car has only begun its bloodshed and is on the prowl for more helpless victims. After the massacre, an unaware hitchhiker is busy practicing his French horn while waiting on a lift from a generous driver as the sun shines down on the desolate landscape. The hitchhiker is sat near the house of one Amos Clemens, a local well known for being a domestic abuser. 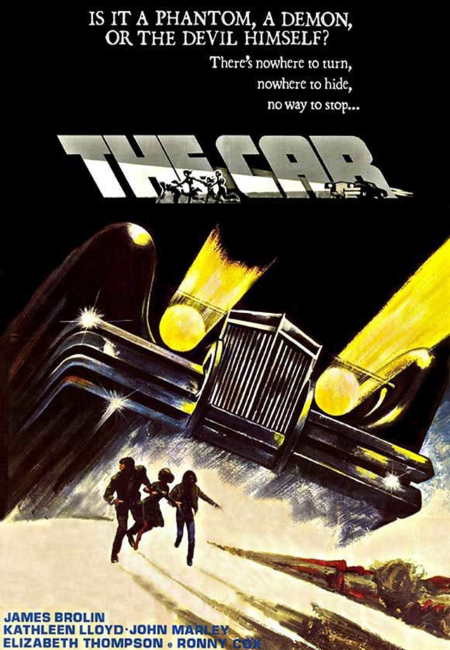 The music gets on the nerves of the homeowner so much so that Clemens leaves his house to berate the hitchhiker. He aggressively orders him to stop playing. The hitchhiker puts up a feeble defence against the demands before bowing out and walking away as he was told to do so. The annoyed traveller walks down the road and becomes even more frustrated when a black car drives past him, trailing up dust in its tracks. He cusses out the driver during an angry fit and realizes that it was a mistake to do so when the car reverses. It manages to run over the fleeing hitchhiker several times, ratcheting up the death toll to three for that morning. The cops, including Wade Parent, arrive on the scene after being called by a concerned Amos. They quickly come to understand that a mad man was committing vehicular manslaughter in their sleepy little town after the bodies of the two cyclists were found.

The film, being accused of trying to recycle moments from more critically successful movies such as Duel, was not well received upon its release. Some of those less than stellar reviews had good reasoning behind them such as poor acting by a few prominent cast members but I found it to be solid B movie and enjoyed watching it. Part of this is due to its gritty 1970s charm that wouldn’t have had an impact on its contemporary audience and also because I was forewarned going in that it was not particularly highly regarded. Interestingly, this was released a few years prior to Stephen King’s beloved Christine, which is of a very similar nature, in either its book form or film adaptation. This film still lingers in the fringes of pop culture as a spin off was made in 2019 called ‘The Car: Road to Revenge’ in which there was one returning cast member but I believe it is meant to be rather woeful.

Quiet please. I am analyzing.