Greetings, today’s blog update is the last one from 2014 and it sums up my favourite entertainment that the year has provided. Like last year’s review the categories consist of games, books, television shows and films that I have experienced in 2014 and not necessarily media that has been produced during the year. The next blog update will occur sometime next year and I will be reviewing ‘The Hobbit: The Battle of the Five Armies’. I hope that 2014 was a good year for you and wish that 2015 proves to be an even better year.

Television show of the year: Fargo

I haven’t seen that many TV series this year but Fargo was certainly an entertaining show to watch. Prominent celebrities include Martin Freeman, Billy Bob Thornton and Allison Tolman who were cast as the main characters. The show does have links to the 1996 film but it is set in 2006 and revolves around new characters that are unrelated to the original Fargo. Billy Bob Thornton as Lorne Malvo, a sadistic contract killer, is one of the shows highlights and is a memorable character that keeps the story interesting. Even though season two of Fargo will focus on different individuals I am still looking forward to what will bring and if it is connected to the Coen brother’s previous works.

Game of the year: The Walking Dead

The game of the year goes to Telltales’ take on ‘The Walking Dead’. The story is episodic in format and is set during a zombie apocalypse, following survivors named Lee Everett and Clementine. It introduces a wide range of colourful characters that often come into conflict with one another and forces the player into difficult decisions. The choices are difficult to make with the player being pressured due to a short time limit in order to reach a decision that often pits morality and rational reasoning at odds. I have yet to play the DLC or the second season but I intend to play them soon and am expecting it to keep up to the same high standard as the original.

Book of the year: A Clash of Kings

‘A Game of Thrones’ was crowned the book of the year for 2013 and ‘A Song of Ice and Fire’ manages to win the title again in 2014. George R.R. Martin is a talented writer who has created some intriguing stories and characters, most notably the clever and sly dwarf known as Tyrion Lannister. This novel introduces some new characters, such as Melisandre, that will become more important as the series advances and it has expanded on others that were only mentioned in passing previously. Martin is setting up a complex world with an extensive lore and various opposing factions that the reader has only just begun to explore. I have plenty more novels to read before the series is finished and I am eager to see what plot twist lie ahead or who will be the ultimate victor in the conquest for the Iron Throne.

Film of the year: Guardians of the Galaxy

This year’s competition for movie of the year was a tough one as ‘The Wolf of Wall Street’, ‘X-Men: Days of Future Past’ and ‘Guardians of the Galaxy’ were contenders. It was a close call between the three notable films but the latter wins the title and is easily the best work that the Marvel Universe has produced so far. It stars Chris Pratt, Zoe Saldana, Vin Diesel, Bradley Cooper and Dave Bautista as the main cast. The film has many positive aspects including a good sense of humour, memorable characters as well as a noteworthy soundtrack. I look forward to what the Marvel Universe has in store, especially the sequel to Guardians of the Galaxy.

What should we do next? Something good, or something bad, or a bit of both?

Greetings, today’s blog update is a short message wishing you a merry Christmas. To celebrate the occasion I have written an entry called ‘The Death and Life of Ellen Smith’ despite the fact that there are no more Write Wise Christmas Challenges. Last year’s story was ‘Frontier Planet: Winter Tales’. I hope you enjoy this new entry. The story itself is intended to be a standalone plot which is unusual as Cogworld and William Litt: Corruption are the only other works that I have created that don’t have a sequel or prequel. My next update will be celebrating the end of 2014 with a quick review of this year’s entertainment. I hope you have a good Christmas.

A Clash of Kings

Greetings, A Clash of Kings is the second novel in the Song of Ice and Fire series, written by George R.R. Martin and was published in 1998. In this novel he introduces new characters to the story, such as Melisandre of Asshiai, and elaborates on those who had only been mentioned beforehand, most notably Stannis Baratheon. There are a lot of characters to keep track of even this early on in the series as well as numerous dynasties with different loyalties and an extensive lore. There certainly were a few more minor individuals that lacked any sort of uniqueness, personality or traits that made them stand out and added to the confusion. I’m sure that it will only get more complex as the series progresses as even more characters are introduced. Despite this, it still is an entertaining experience due to the inclusion of devious or untrustworthy characters such as Tyrion, Varys and Littlefinger.

The plot takes place shortly after the first novel and the kingdom is at war with four kings competing for the throne. Joffrey, a young and cruel king who had inherited the throne from Robert, tries to maintain his crown from the clutches of the other kings. As he is an unpopular ruler he has to keep his starving and rebellious subjects suppressed or be overthrown by his own population. Robb Stark crowned himself king of the North and attempts to avenge his father’s fate by waging war against Lannister troops. In another plot line, the Stark kingdom of Winterfell is under threat from a region that seeks its independence from the North and the rebels hope to achieve it through force. The other two kings are Robert’s brothers who are called Stannis and Renly. The two both claim that the throne is rightfully theirs and as such are on hostile terms, threatening to use their militaries to settle the dispute. While Renly relies on earthly powers his older brother, Stannis, has enlisted the help of a sorceress called Melisandre to help him win the war. 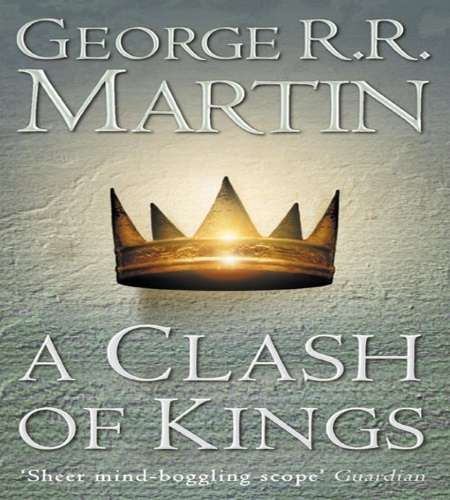 The storyline revolving around the four monarchs is the most prominent plot in the novel but there are others that take place outside of the main realm. For instance, John Snow and a convoy of the Nights Watch are searching for his uncle, Benjen Stark, beyond the wall as he had not returned from his mission in the first book. The main concern of the order is that there are circulating rumours that Mance Rayder, king beyond the wall and a threat to the Nights Watch, is building an army of wildlings and supernatural creatures. Another central character to the plot is Daenerys Targaryen, a princess titled the mother of dragons, that lost her inheritance to the Iron throne of the seven kingdoms when Robert took it by force. In my opinion her storyline is rather slow and her chapters are the least interesting to read. Her chapters are about her attempts to raise an army in the East in order to invade and retake the throne that was denied to her.

Those are just a few of the many plots and characters that are in the novel. Individuals such as Arya Stark do have chapters dedicated to them but it would take too long to list all the important characters for this blog update. I did notice that many previous characters, including the antagonist Jamie Lannister and John Snow, received little attention in this book compared to the original but I assume that this was to introduce new characters. Overall, it is entertaining to read even if some characters are a little dull at times. I look forward to what lies in store for the future of the series and all the unexpected plot twists that are bound to come. I would encourage you to watch it if you have an interest in the fantasy genre.

I wanted this to be professional. Efficient, adult, cooperative, not a lot to ask. Alas, your Mr. Takagi did not see it that way, so he won't be joining us for the rest of his life.