Greetings, New Year’s Eve is finally here and, to mark the occasion, so is my last blog update for 2021. As per usual, I will be discussing my picks for the best titles in the entertainment categories that I experienced or wrote about during these past several months. Feel free to comment below on what media you enjoyed in 2021 or if there are any particular upcoming projects that you are looking forward to in the next year.

Unfortunately, 2021 felt like a bit of a washout due to the lack of cultural events or memorable moments and a more cynical or perhaps, by this point, a more realistic person would argue that 2022 will be more of the same. Despite this, one thing to note about this year was the great effort made to celebrate 10 years of Write Wise. It is a great credit to this small community that the site is still growing strong after a decade in existence, that the stories are getting bigger and better and that there is no indication that it is slowing down. I am looking forward to what will happen next year on the site but for now I’ll be discussing my winning choices.

Television Show of the Year: GLOW

Staring Alison Brie, Betty Gilpin and Marc Maron to name a few from a large and memorable cast, ‘GLOW’ lasted for 3 fantastic seasons before being cancelled by Netflix due to Covid-19 restrictions. As a result, the last planned season will likely never be seen which is a shame as it had ended on something of a cliff hanger and there were still many plotlines left to explore. The series is a dramatization of the real 1980s show, the Gorgeous Ladies of Wrestling, and follows the increasingly complicated relations between the numerous women who participate in the theatrical wrestling matches. The tenuous friendship and personal rivalry between the leads of Ruth Wilder and Debbie Eagan is one of my favourite aspects about this programme and I’d recommend that you watch it if you haven’t done so already.

Book of the Year: The Hellbound Heart

Known for being the source material of the famed horror movie ‘Hellraiser’, the Hellbound Heart was written by Clive Barker in 1986. The book, published one year before the film was released, introduced readers to the horrifying and sadomasochistic world of the Cenobites and the iconic Pinhead as Kirsty attempts to escape their pleasurable torture. It is similar to the aforementioned movie for the most part but one key difference is Kirsty’s relationship to Rory for in the film adaptation she is his daughter but in the novel Kirsty is merely a friend. If you enjoyed the story on the big screen then I imagine you would appreciate the one on paper as well.

Game of the Year: Half-Life

There is not much that needs to be said about this classic first person shooter game. Released back in 1998, Half-Life lets the player control the silent protagonist of Gordon Freeman as he battles his way out of the Black Mesa Research Facility after an experiment goes horribly wrong. There is no shortage of enemy AIs in this beloved game, either extra-terrestrial or human, and the game play has a developed a nostalgic feel to it over time. Despite being a few decades old by this point, Half-Life and its sequels still stand out as a creative high point for gaming industry.

Film of the Year: The Elephant Man

A much more down to earth film one would expect from the surreal director David Lynch who introduced the world to the bizarre series of ‘Twin Peaks’ and the cult hit of ‘Eraserhead’, the Elephant Man is based on the life of Joseph Merrick and the deformities that made him a celebrity in Victorian England. John Hurt gives an impressive performance as Merrick, while under heavy prosthetics, and his touching friendship with Anthony Hopkin’s Frederick Treves is most certainly a highlight of the movie that is worth emphasising. I also appreciated the decision taken to have it in black and white as this give the picture an almost timeless quality to it.

That about wraps it up for 2021. I hope we will be able to look upon 2022 with fondness 12 months down the line. My blog will return in January, with its usual style, to review a famous pop culture television show from the 1960s that I enjoyed watching recently for the first time. Have a great New Year!

Can the Spider-Man come out to play?

Greetings, it is that time of year again and that means it is time for me to wish you a Merry Christmas and a Happy New Year! I hope that you have a good day tomorrow and are taking it easy for the next few days. As per usual, there is only one blog update left for the year in which I will be doing my annual review of the media I enjoyed. I had a lot of fun entering Write Wise’s challenge this year with my novelette, ‘The Night of the Gremlins!’, and found the entries submitted in the entirety of 2021 to be among some of the best work that we have produce as a blogging community so far. I’m already drawing up plans for my writing projects for the next year and I can’t wait to see what you are going to do next. Have a merry Christmas! 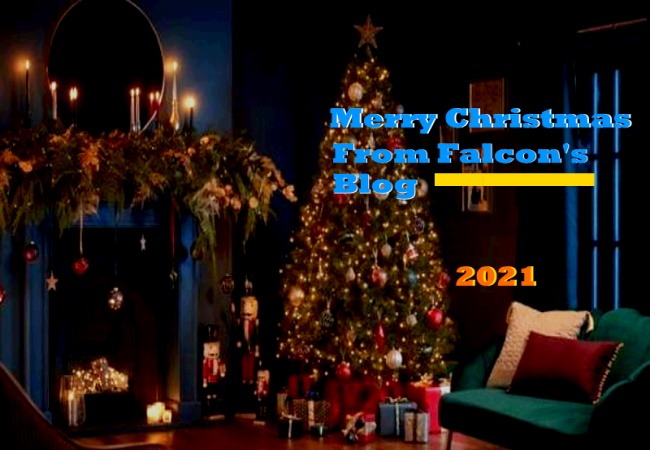 Merry Christmas, Alfred. Good will toward men... and women.

Greetings, ‘Last Night in Soho’ is a 2021 horror film directed and co-written by Edgar Wright. The director is perhaps best known for his contributions on the Cornetto Trilogy but he was also involved in various works such as ‘Spaced’, ‘Scott Pilgrim vs. The World’, ‘The Adventures of Tintin’ ‘Ant-Man’ and the critically acclaimed ‘Baby Driver’. The film stars upcoming actress Thomasin McKenzie, known for being in Taika Waititi’s ‘Jojo Rabbit’, as the main protagonist named Eloise ‘Ellie’ Turner. Other notable cast members include Anya Taylor-Joy, Matt Smith, the late Diana Rigg, Terence Stamp and Pauline McLynn. The music was composed by Steven Price and, similar to ‘Baby Driver’, this movie contains a lot of retro hits from artists such as Peter and Gordon, Sandie Shaw, the Kinks, Cilla Black and Barry Ryan.

The plot begins when aspiring fashion designer, Ellie, is accepted into the London College of Fashion as a first year student. After spending most of her life in rural Cornwall, Ellie is excited by the prospects of moving to metropolitan London and the sense of freedom that comes with it. She quickly comes to realize that her optimistic dreams and the harsh reality are too very different scenarios as her love of Swinging Sixties culture, her rural background as well as her dress style makes her stand out from the rest of the students. It is also subtly hinted that Ellie has a connection to the supernatural when she sees her deceased mother’s reflection in mirrors which further adds to her alienation. After deciding that she wasn’t going to get on with her snobbish roommate called Jocasta, Ellie decided to take up accommodation in a rundown bedsit run by the elderly Miss Collins. 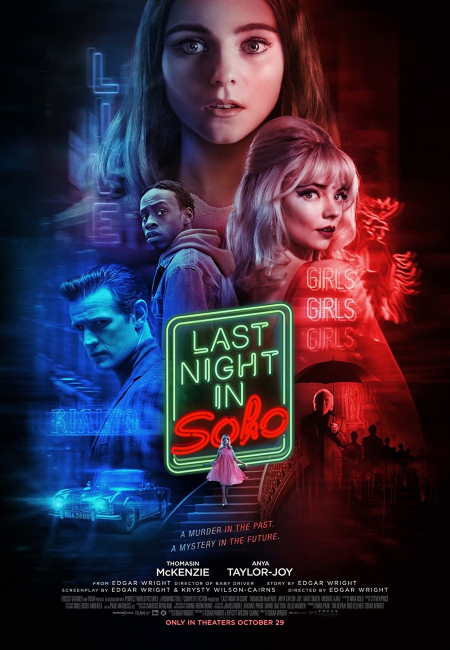 Ellie is more at home in the older flat as she is able to play her old hits in peace and is encouraged to do so by the nostalgic Collins. During her first night there, Ellie falls asleep and wakes up in another time. She has been transported back to the glitz and glamour of London during the 1960s in a dreamy vision. At the Café de Paris she watches as a confident blonde makes her way around the club and introduces herself as Sandie to a teddy boy named Jack. Sandie explains that she wants to be a singer at the Café. Being a manager, Jack agrees to launch her career in showbiz and the two begin a relationship in which he gives Sandie a love bite on her neck. Ellie wakes from the blissful dream and discovers the hickey is on her own neck. Suspecting the dream may have been real in some sense, Ellie looks forward to visiting the London of the past once more but is oblivious to how her paranormal perception will come to haunt her.

I really enjoyed this film and appreciated the visual style Wright brought to the screen as well as the accompanying soundtrack that really added to the experience. I was never entirely sure where the plot was headed but I certainly had fun watching it unfold towards its climactic ending and trying to unravel the mystery. Most characters were well developed, with Ellie and Sandie being particularly well done, but some of the more secondary characters never got much chance to grow in my opinion although this is a minor point. After thoroughly enjoying this and his previous work ‘Baby Driver’, I am keen to see what else Edgar Wright has in store for his next venture in storytelling.

Song is over, Baby. But I'm afraid you still have to face the music.