Greetings, today’s blog update is a review of Sympathy for Mr. Vengeance, a South Korean film and the first installation in the Vengeance trilogy. Last month I had reviewed Old Boy which is the second movie in the series but is unrelated in terms of plot and doesn’t share characters across the two works. It was released one year earlier than Old Boy in 2002 and was directed by Park Chan-wook. It stars Song Kang-ho and Shin Ha-Kyun as the two opposing protagonists and Bae Doona as a central character to the plot. Unlike other traditional storylines or films as there doesn’t appear to be a clear heroic figure. Both the leading characters are motivated by vengeance and both could be described sympathetic villains or anti-heroes due to their morality and aggressive actions.

The plot begins with Ryu, a deaf-mute manual labourer who works at factory to financially support his ill sister called Im Ji-eun. His sister urgently requires a kidney but Ryu doesn’t have the money to afford the operation. His situation is made worse when he was laid off by his employers and so he reaches out to black market organ donors. He offers them his own kidney and money in exchange for one that will suit his sister’s needs. The operation goes ahead but Ryu is left, abandoned by the thieves and when he wakes up he realizes he didn’t receive his end of the deal. In need of money Ryu’s girlfriend, an anarchist by the name of Cha Yeong-mi, comes up with a plan. She suggests a radical scheme to kidnap the daughter of Park Don-Jin for ransom and when the money has been paid it can put towards the operation. Don-Jin is an executive at the plant and friend of Ryu’s ex-boss. He was chosen as their victim as to not raise suspicion but also to as he could afford the hostage takers demands. 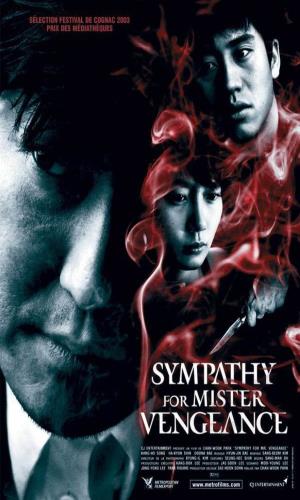 The two succeed in taking the child known as Yu-sun, much to the desperation and grief of Park. Things take a turn for the worse when Ryu’s sister finds out about the plan and kills herself when she realizes that it was done in her name. After learning about her death, a distraught Ryu takes her to be buried near a river where they used to play alongside when they were children. The hostage is also taken along as well to the site and Yu-sun manages to drown while the deaf protagonist is burying his deceased sister. When Yi-Sun’s body is found, her father seeks revenge and begins to track down the murderer with the intention of killing him as well as those involved in the plot. On the other side of the story Ryu and his girlfriend Cha attempt to track the organ donor criminals that conned him near the beginning of the film. They have the same sinister intent and ambitions as Park has for them.

I enjoyed the movie even though it has some particularly disturbing scenes in it that are off putting for some individuals. Despite the entertainment it provided I felt that Old Boy was an improvement on it as well as a being better film in general. Sympathy for Mr Vengeance isn’t going to be a movie for everyone to appreciate due to its ultra-violence or torture scenes and I’m not sure that all members of this blogging community would enjoy it either. As I have already seen the first two in the trilogy I would like to finish it off with by watching the third instalment and am eager to see if it holds up to the standard of the previous works. Hopefully, I will have the opportunity to see and review Sympathy for Lady Vengeance at some stage in the near future.

As you know, I have made a vow never to give you information that could potentially alter your destiny. Your path is yours to walk, and yours alone. That being said, Khan Noonien Singh is the most dangerous adversary the Enterprise ever faced. He is brilliant, ruthless, and he will not hesitate to kill every single one of you.

Sam and Max: Hit the Road

Greetings, Sam and Max: Hit the Road is a point and click adventure game from 1993. It is the first Sam and Max game to be have been made and remained the only one until the franchise was updated by the Telltale series that lasted from 2006 to 2010. The planned 3D sequel named Sam and Max: Freelance Police was announced in 2002 and cancelled a few years later in 2004. Hit and Run was developed by LucasArts and as such it does not have an episodic approach to storytelling like the sequels do. There are still a few similarities between the two versions such as the whimsical style of humour, musical scenes and unusual puzzles. Hit and Run felt a little strange to play as the characters that I was used to interacting with were created or developed by Telltale and their absence was noticeable. Despite this, some of them were briefly mentioned in passing but never seen such as Bosco or their crime fighting neighbour, Flint Paper. Instead Hit and Run introduced new characters that weren’t included in the later series.

The plot, in usual Sam and Max style, is an unusual and light hearted. Sam and Max receive a call from the commissioner, who is never seen, to head down to the Kushman Brother’s Carnival. Once there Sam and Max are told by the Brothers, who are conjoined twins, that one of their star attractions is missing. The attraction is Bruno, a frozen Sasquatch or Bigfoot, that managed to escape. The Bigfoot isn’t the only one that went missing. A woman named Trixie with an elongated neck that resembles a giraffe’s had also disappeared at the same time that Bruno vanished. Armed with little information or clues, it is up to the freelance police to track the down the two missing individuals. 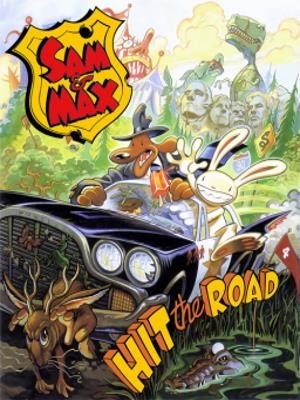 They explore various locations and tourist sites such as the world’s largest ball of twine or the vegetable resembling celebrities museum. It isn’t long before the duo discovers that a Liverpudlian country singer named Conroy Bumbus and his henchman, Lee Harvey, are also on the lookout for Bruno. They intend to use the Bigfoot for performance purposes, forcing Bruno to aid in his singing career. Sam also uses clues to deduce that Trixie was the one behind Bruno’s escape by unfreezing him from his block of ice. Therefore, the freelance police have to find Bruno and Trixie before Conroy does. There is a wider story beyond finding the two escapees but I won’t delve an deeper into the plot than I already have.

I had a few issues with the game. At times it was difficult to tell what objects were interact able as some items appeared to be in the background and the clues weren’t particularly helpful either. As such it had lead to a lot of confusion because the puzzles aren’t grounded in reality or logic based solutions. One noticeable aspect is that a lot of the characters were one dimensional and served only to further the plot, especially in comparison to the creations from Telltale Games. There were also a few mini-games included in the story such as Whack-A-Mole to break up the plotline. Overall, I found it to be an enjoyable experience but I don’t quite get why it is regarded as a cult classic or one of LucasArt’s finest games.

As you know, our student records are held on a Microsoft Paint file, which I was assured was future-proof...