Greetings, the Dark Tower is chronologically the last book of Stephen King’s Dark Tower series, a collection of novels that provides a connecting bridge for all of the revered horror writer’s stories. Many characters from King’s other novels are either featured in this conclusive book or are mentioned in passing and therefore adding to the overall lore of this fictitious universe. It is the seventh instalment in the franchise and was released back in 2004. While it serves as the finale of the adventure, King wrote a short novel entitled ‘The Wind through the Keyhole’ in 2012, which is situated between ‘Wizard and Glass’ and ‘Wolves of the Calla’. As such, ‘The Wind through the Keyhole’ is regarded as book 4.5 as it takes place between the fourth and fifth novels. A film adaptation of the books is currently in development, staring Idirs Elba from Luther and Pacific Rim fame as protagonist Roland Deschain of Gilead. Matthew McConaughey portrays a primary antagonist and sorcerer named Walter or the Man in Black. The choice of Idris as Roland has been met with sharp criticism from the diehard fans of the series as it tampers with central character progression and the circumstances around certain individual’s relationships with others.

The plot resumes where ‘Songs of Susannah’ left off in which they protagonists are searching for the demon possessed and pregnant member of their team, Susannah. Jake Chambers, the youngest member of the heroes, Father Callahan, the main character of Salem’s Lot and Oy, a fictitious creature known as a billy-bumbler, enter a restaurant called the Dixie Pig. The New York based restaurant is infested with Vampiric creatures which the trio must fight their way through to save their friend and fellow gunslinger Susannah who is trapped in another dimension known as Fedic. In the other world of Fedic Susannah watches as Mia, the hermaphroditic demon that had possessed as well as impregnated her, is about to give birth to an unholy creature. The child birthed by Mia is partially human due to Roland’s forced copulation with the demonic Mia in the first book, and a partially mutating spideresque being fathered by the primary antagonist, the Crimson King also known as the Lord of the Spiders. The transforming boy, called Mordred Deschain, feasts on Mia shortly after the pregnancy is complete. Susannah, no longer possessed by Mia, is able to shoot and injure Mordred. This causes the infant to scuttle away for safety. The last part of the band of gunslingers, Roland and Eddie Dean, attempt to find the otherworld of Fedic from Maine in America. They eventually make their way to the destination and find Susannah in her right mind once more. 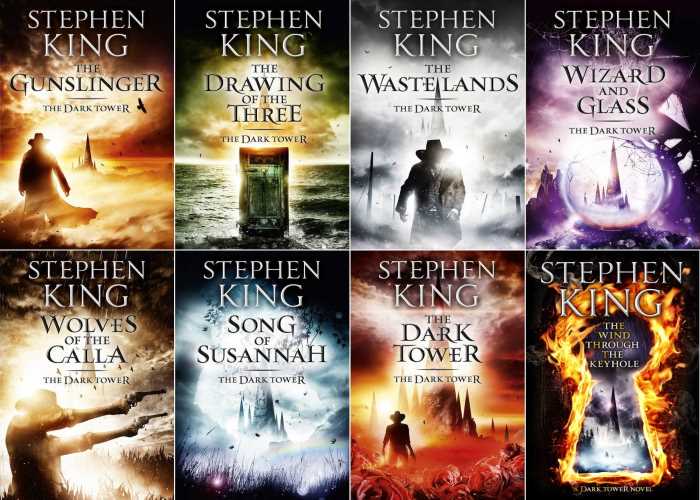 Once the heroes have been reunited in the other world, with the exception of Father Callahan who never made it past the Dixie Pig, they continue their long journey to the Dark Tower. Mordred Deschain, although severely wounded by Susannah Dean, continues to stalk and pursue the group with the hopes of killing Roland as per the Crimson King’s demand. The team continue on with their mission to save and reach the Dark Tower, which is of central importance to keeping the universe from ripping apart. The beams which hold up the tower are being attacked and weakened by telepathic humans called Breakers. Breakers, as revealed in the novel, use their supernatural powers to unravel the universe and it is up to the gunslingers to stop the fall of the beam by any means necessary. Several beams had already fallen prior to the beginning of the final novel which caused strange effects to ripple across the worlds such as time slowing down. Once the protagonists reach the station where all the Breakers are located, they prepare for a mass assault on the compound.

The Dark Tower series has a very bizarre story as I am sure you have realized after only glimpsing at the plot through my reviews. King combines the Western genre with fantastical elements to create a very unique story as well as some intriguing characters. The franchise is still ongoing in a sense despite the conclusive novel being released over a decade ago. As already mentioned, the film is currently underway and opens up possibilities of a new future for the Dark Tower property. Numerous graphic novels that focus on these characters are still being produced by Marvel comics and have been published throughout the years since they began in 2007. These graphic novels provide the reader with new adventures to explore, plots that revolve around a young Roland Deschain who’s earlier years were only partially mentioned in the original books. After having read the entire collection of Dark Tower novels, I am eager to experience some of Stephen King’s other novels.