Butch Cassidy and the Sundance Kid

Greetings, Butch Cassidy and the Sundance Kid is a cult film from 1969 staring Paul Newman and Robert Redford in the titular roles. The movie is loosely based on the life and exploits of the two Wild West outlaws Robert LeRoy Parker, better known as Butch Cassidy, and Harry Longabaugh whose alias was the Sundance Kid. Katharine Ross is one of the main performers as she plays Sundance’s paramour, Etta Place, who is also based on a real historical figure. Burt Bacharach, a singer, songwriter and composer know for many famous love songs such as ‘(They Long to Be) Close to You’ and ‘What the World Needs Now Is Love’ composed the music for this film. Notably, Bacharach wrote ‘Raindrops keeping Fallin’ on My Head’ specifically for Butch Cassidy and the Sundance Kid which is a song that has become well known in its own right.

The movie starts in the state of Wyoming during the late 1890s. Butch Cassidy returns to his hideout at Hole-in-the-Wall to discover that he has been usurped as leader of the criminal gang. The outlaws had elected Harvey Logan, also known as Kid Curry, as their new leader due to Cassidy’s long and erratic absences. Harvey explains the situation and adds that they are going to rob the Union Pacific Overland Flyer before challenging Butch over the gang’s leadership via a knife fight. Cassidy wins the fight due to underhanded techniques and trickery but decides to follow through with Harvey’s plot to rob the train. The robbery is a success. The duo of Butch Cassidy and the Sundance Kid celebrate their victory by visiting a nearby brothel. Afterwards, they return to Etta’s home with their ill-gotten gains. 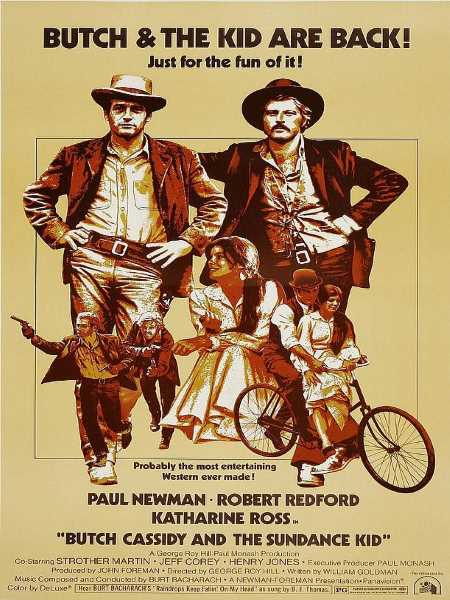 After a while, Butch and Sundance decide to strike the trains once more in a move that is less successful. The gang manage to stop the train but Cassidy overestimated how much dynamite was required to blow open the safe and accidently destroys the train carriage in his overenthusiastic attempt. The money has been scattered by the explosion and by the time the gang are trying to pick up the stolen cash, a second train arrives on the scene. This one is transporting a highly skilled posse of lawmen who were hired by the Union Pacific chairman, E.H. Harriman, to track down and kill Butch Cassidy as well as his colleague Sundance. Cassidy and the Kid manage to flee the site of the crime but soon realize that they are being tracked down by professionals who are determined to catch them, ensuing in a long chase between the two parties.

Overall, I really enjoyed this film and I thought that it had a certain charm to it. I was aware of its classic status and the reputation it held before I decided to watch it, so I was expecting something of a memorable experience. The movie lives up to its legacy in my opinion and proves to be a unique take on the Western genre as it is filled with great comedic moments and loveable, charismatic characters with an excellent soundtrack to accompany it. I would encourage you to watch Butch Cassidy and the Sundance Kid if you haven’t already done so beforehand or if you are interested in the Western genre.

This is one time where television really fails to capture the true excitement of a large squirrel predicting the weather.