Greetings, Dragon Age: The Calling is a book written by David Gaider and is a sequel to his other novel, The Stolen Throne, as well as being a prequel to Dragon Age: Origins. It expands on a few characters from the video game such as Duncan who was a character that was used to introduce the world of Thedas in Origins to the player. Another is a darkspawn emissary by the name of the Architect who came from the Dragon Age expansion pack. The book delves deeper into his plan for ensuring peace between the darkspawn and the other species on the planet through destructive mean as well as revealing a little about his past but mostly keeping it shrouded in mystery.

It is set several years after the events of the first book with King Maric having returned to his throne and ruling Ferelden after he had reclaimed it from the Orlesian Empire through military force. A group of Grey Wardens, which includes the newly recruited Duncan, is led by an experienced veteran known as Genevieve ask Maric for his help to lead them through the Deep Roads. They want the king to direct them towards an abandoned Dwarven city called Ortan Thaigh which Maric had travelled to several years previously when he attempted to oust the Orsleians during his adventures in the first novel. It had been revealed to Genevieve in a dream that her brother Bregan, an important figure in the Grey Wardens, had been kidnapped by the darkspawn and was being held underground in the Deep Roads. 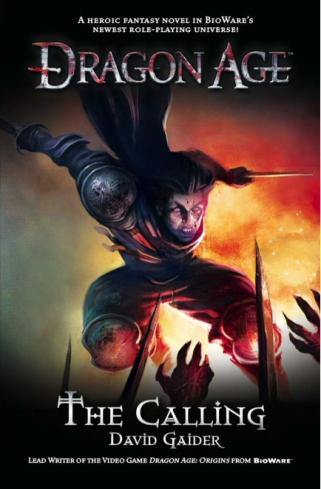 It is an unusual action by the creatures as they normally kill rather than take prisoners and is made even more unnerving as Bregan was one of the few in order who knew of the location of the Old Gods. The Old Gods are what the darkspawn strive to find and awaken so they can rise to the surface in a bloody event known as a Blight and physically corrupt the world with their presence. As such it is important that the Grey Wardens find Bregan and rescue him before he reveals the coordinates under interrogation. Maric agrees to aid them in their quest. Meanwhile, in the Deep Roads Bregan meets the Architect while imprisoned and is slowly convinced to help him in a risky as well as lethal plan to achieve peace between the darkspawn and the other creatures in Thedas.

While I mostly enjoyed the book I felt it was a little lacking in story which Gaider tried to fill with a few unnecessary battle scenes in order to kill off a few main characters. An additional villain was also created and reviled shortly towards the end of the book and could have expanded upon during the plot but he received little attention until the novel was almost over. There is also a romantic subplot near the end of the book that is almost identical to one in the first novel that involved one of the same characters and as such felt a little too familiar. Another issue I had with it was that several characters from across the Dragon Age media have a very similar personality such as Maric, a young version of Duncan and Alistar who is a main character from the original videogame. Despite this I still enjoyed the experience and look forward to his next novel Dragon Age: Asunder.

I CAN'T GO BACK TO JAIL!

The Hobbit: The Desolation of Smaug

Greetings, the Desolation of Smaug is the sequel to 2012 film An Unexpected Journey and is the second instalment in the Hobbit trilogy. Unlike my experience with first movie my expectations weren’t high in the hope that the Hobbit would be as good as, if not better, than the Lord of the Rings trilogy. With this change in attitude I felt the film was better than the original but still contained some aspects that prevented it from becoming a great movie. For instance, the majority of the 13 dwarves still lack any sort of character development or interesting characteristics that make them distinguishable from each other.

The plot begins with the dwarves, Bilbo and Gandalf fleeing from Azog. They are still on the same mission in which the Hobbit has to find and steal the Arkenstone from the dragon called Smaug. It becomes clear early on that they are also being chased by a black bear, which Gandalf is able to identify as Beorn , a skin-changer that takes on the forms of animals. They escape to the safety of Beorn’s house and spend the night there after nearly getting caught by the black bear during the chase to his home. In the morning Gandalf leaves Bilbo and the dwarves, in order to have a subplot of his own about the necromancer, making the team travel to the Lonely Mountain by themselves. As they continue their quest by travelling through a dark forest the company is ambushed by giant spiders and it is up to Bilbo to help them escape.

The running time was a little too long for my tastes, but it wasn’t as noticeable as the first, as there were some unnecessary scenes and added characters that didn’t add much to the plot. While I didn’t think they were necessary it will be interesting to see what Jackson has planned for a younger Legolas and his companion Tauriel, a character made especially for the sequel, in the third film.

I liked the way Jackson linked the Hobbit to the Lord of the Rings by using future references, such as the short conversation between Gloin and Legolas about his son, Gimli. Even though I preferred this film, I am still under the impression that making the Hobbit into a prequel trilogy is stretching the story too thin. With the introduction of Smaug as well as the Bard and his back story, the plot is set up for the final film which could still prove to be more entertaining than its prequels.

I believe in Sherlock Holmes.