Greetings, Rogue One is a 2016 film and the first instalment in the Star Wars: Anthology series. The story serves as a prequel to a New Hope and offers a more complex view of the conflict between the Rebel Alliance and the Galactic Empire than the previous entries. Most of the surviving original cast are not involved in Rogue One bar a few cameo appearances from actors such as Anthony Daniels. Interestingly, GCI was used to bring back characters such as Grand Moff Tarkin who was originally played by Peter Cushing in A New Hope. This option had been used as Cushing has been dead for over two decades at the time of this film’s release. New actors and actresses were brought into the Star Wars universe to introduce original characters to the series. Among the main cast are Felicity Jones as Jyn Erso, Diego Luna as Cassian Andor, Ben Mendelsohn as Director Krennic, Mads Mikkelsen as Imperial scientist Galen Erso, James Earl Jones as the iconic voice of Darth Vader and Alan Tudyk as K-2SO. The music was composed by Michael Giacchino who orchestrates a soundtrack in a similar style to John Williams.

The film begins, with the iconic opening crawl notably absent, on an isolated farming planet in which research scientist Galen Erso and his family are in living. The world was chosen as part of a deliberate attempt to hide from the Empire’s clutches. Imperial forces lead by Director Orson Krennic, land on the planet once the scientist has been located. Krennic confronts Galen and attempts to convince him to continue constructing the superweapon named the Death Star. The negotiations take a violent turn when Lyra, Galen’s wife, is killed and his daughter Jyn goes into hiding. Galen is coerced into working for the Empire once more while Jyn remained unfound by Imperial Stormtroopers. The girl is eventually discovered by the extremist Rebel and Clone War veteran Saw Gerra as he had been informed by Galen about Krennic’s arrival in a prior scene. Jyn is taken under Saw’s wing for a number of years until they eventually go their separate ways before the next sequence begins 15 years later. 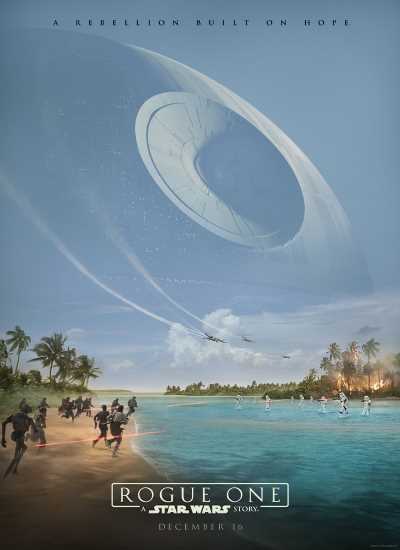 A defector from the Empire, Bodhi Rook, tries to smuggle a holographic message from Galen to the extremist Guerra. Saw is currently waging an armed revolt against the Imperial presence in the desert moon of Jedha. The message explains that Erso, as architect of the Death Star, had intentionally created a weak spot within the superweapon that could be exploited by the Rebel Alliance. Meanwhile an adult Jyn Erso is freed from an Imperial labour camp by rebel soldier Cassian Andor and K-2S0, a reprogrammed droid that used to work for the Empire. Andor, an intelligence officer for the resistance, was sent to save Jyn so that she could help the Rebels find her father and uncover more information about the Death Star.

I believed that the film was an admirable attempt of beginning the anthology series but it had several flaws that prevented me from classifying it as one of the best Star Wars films. Initially, I found the opening scenes which introduced several of the main characters to be poorly paced. I also thought that the majority of the characters had no real personality nor did they significantly progress as individuals through the storyline. There are also hints of potential romantic desire between Jyn and Andor during the finale but this is also the first indication that their relationship isn’t strictly platonic. K-2SO was the one character that stood out the most to me but I found that about half of his punchlines or snide remarks fell flat in its comedic attempts. On the positive side, I consider Galen’s installation of a weak spot in the Death Star to be an interesting technique that explained how the superweapon had such a fatal architectural flaw in the first place. Overall, the film was satisfactory in my opinion and that the last scene was by far the most interesting as audiences witnessed a glimpse of Darth Vader’s extensive and powerful abilities as a Sith Lord. Despite my reservations with Rogue One: A Star Wars Story, I have high expectations for the next Anthology films centred on the iconic smuggling scoundrel Han Solo and feared intergalactic bounty hunter Boba Fett.