Greetings, The Shining is a 1977 novel by famed American horror writer Stephen King and is his third book after Carrie, which was released in 1974, and Salem’s Lot which was published in 1795. The novel is an iconic piece of literature, no doubt brought into the zeitgeist of popular culture even further by Kubrick’s excellent film adaptation from 1980 with Jack Nicholson as the manic Jack Torrance, Shelly Duvall as suffering female lead Wendy and Danny Lloyd as the supernaturally gifted son, Danny. The novel goes into much further detail than its filmic counterpart in regards to the history of the hotel and Jack’s troubled personality. For instance, Torrance’s alcoholism is used to weaken his resolve and tempt him into a murderous rampage in Kubrick’s version but the original delves much further into the murky depths of Jack’s drinking problem as well as his hard childhood. I was only familiar with the Dark Tower series previously in regards to Stephen’s writings and as such I was very interested to see what else King was capable of, especially with perhaps his most famous work.

The novel begins in the 1970s with Jack Torrance, a frustrated writer, securing employment as caretaker of the Overlook Hotel over the winter season. The Overlook, an old hotel located in the Colorado Rockies, is to be closed to guests due to the heavy snowfall that annually hits the region. Despite the fact that they would be effectively isolated from the outside world once the snow began to fall, Jack agrees to take the job and for his family to take up residence in the hotel for the duration of the season. The manger, a man named Stuart Ullman, informs Torrance of the tragedy that had befallen the previous caretaker. A man by the name of Delbert Grady succumbed to cabin fever and slaughtered his family with an axe. I should note that his daughters, despite their memorable role in the film, are downplayed significantly in this version and only mentioned in passing. 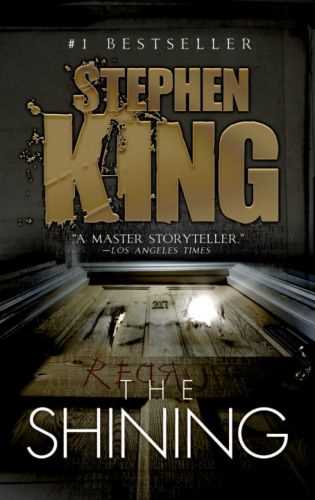 Jack, Wendy and Danny eventually make it to the hotel on its closing day despite Danny’s bad premonitions concerning the hotel. They meet the chef, Dick Halloran, who shows them around the kitchen. Halloran bonds quickly with the young Danny due to their possession of a paranormal ability called ‘the shine’ which allows them to see things others can’t and to communicate through telepathy. Dick, knowing that Danny’s powerful shine would likely allow him to see many unsettling sights lurking in the hotel, assures him that the images are just like pictures in a book and that he couldn’t be hurt by them. With that advice passed on, a reluctant Dick leaves the hotel for another seasonal job in Florida but he can’t really shake the sense that Danny is in danger. The Torrances are soon left alone in the Overlook Hotel as slowly but surely Jack begins to lose his sanity and the snow starts to trap them in.

To my surprise, there were quite a few major differences between the novel and the film although the basic premise obviously stays the same. I had anticipated some characters to fall to certain fates in accordance to the movie’s plot structure, as I had watched the film first, but it didn’t pan out as I was expecting it to. Another variation I noticed was that the novel focused more heavily on the paranormal aspect of the Overlook and the physical threat it held while the movie, which didn’t play on these themes as much, focused more so on a crazed Jack as the only danger to Wendy and her son. Overall, I believe I preferred the film to the novel. This is mostly as some of the famed scenes including the “All work and no play make Jack a dull boy” segment and Nicholson’s brilliant “Here’s Johnny!” adlib do not occur during the book but are key stand out moments that will forever be tied with the story. I also look forward to reading Doctor Sleep, a sequel that King also wrote in 2013 which follows the travels of a now adult Danny.

Greetings, Star Wars Episode VIII: The Last Jedi is the most recent instalment in the Star Wars franchise and it is the third film to be released after Disney bought the rights to the franchise back in 2014. The film sees the return of Mark Hamill as the iconic Luke Skywalker, Carrie Fisher in her last appearance as fan favourite Princess Leia, Anthony Daniels as the comedic droid C3-PO and the new leads with Daisy Ridley as Rey, Oscar Isaac as Poe Dameron and John Boyega as Finn are back on screens as well. Some new actors and actresses also join the series such as Kelly Marie Tran and Benicio del Toro who have considerable screen time as Rose and DJ. John Williams is back once more as the composer, a vital role to this series and one which helped Star Wars become the memorable cultural phenomenon that it is today. The Last Jedi appears to be the most divisive film in the franchise to date in which most of the critics praised it but the average cinemagoer seemed to hold a more negative opinion in comparison.

The plot begins with a space battle in which the Resistance fighters are going toe to toe against a First Order Fleet. The Resistance attack, led by Poe, is successful in destroying a Dreadnought vessel but has resulted in many fatal casualties on their side and so they decide to flee by jumping into hyperspace. Much to their horror, they realize that the First Order has tracked them and is now bearing down upon them with superior firepower and a larger fleet. Kylo Ren leads an assault upon the heroes’ cruisers and after sensing his mother’s presence aboard the Resistance flagship, he refrains from firing a missile upon it. The ship is hit by another TIE Fighter and the contact destroys the control bridge resulting in the death of many of the leaders, including Admiral Ackbar from the Original Trilogy, and hurtling Leia out into space. Leia manages to save herself from the situation by using her force powers to pull herself back on board in a scene which was meant to be uplifting but comes across as ridiculous to me.

With Leia in a comatose state, Vice Admiral Holdo takes command of the fleet much to Poe’s distaste as he believes her strategy of escape is too passive and will result in all their deaths. While this is unfolding, Finn was attempting to use an escape pod to find Rey, and a resistance maintenance officer named Rose saps him with her Taser as she believed him to be a deserter. Dameron, concerned about Holdo’s lack of leadership, asks Finn, Rose and BB-8 to clandestinely travel to the casino planet of Canto Bight and acquire the services of a hacker who could disable the First Order’s tracking device. Elsewhere in the Galaxy Rey asks Luke to train her in the ways of the force on the isolated planet of Ahch-To where he had been living for many years following the destruction of the Empire. Luke initially rebukes her and as the story progress it is eventually revealed why he turned his back on teaching the Jedi religion to others.

Overall, I believe I preferred it to the Force Awakens (which I probably gave too high a rating in retrospect) for trying a new plot instead of rehashing one from the Original Trilogy and for providing some unexpected twists. Another positive is that it is very stylistic and aesthetically pleasing to watch however I have more criticisms than praise for the Last Jedi. This new trilogy seems hell-bent on marginalizing the roles of or killing off the much loved characters that were previously established such as Han Solo and replacing them with boring, one dimensional personalities. There are also issues with the villains in that General Hux seems to be incompetent, Captain Phasma was given so little screen time that she couldn’t make an impact on the story and Kylo Ren does not come across as an intimidating threat. Another complaint I have about the film is the completely irrelevant side plot with Finn and the dull new protagonist Rose on Canto Bight which leads to nothing but serves only as a time filler. Finally, as with the end of Rogue One there is a very forced romance between two of the main characters which feels very unnatural and comes out of nowhere. While I will undoubtedly watch the next instalment in the franchise when it is released in cinemas, I will not have high expectations for it.

Oh, that wasn't a bit nice...You have made me very angry... very angry indeed!