Greetings, Bastion is an action role-playing videogame that was developed by Supergiant Games and was published by Warner Bros in 2011. As it is an indie game, it lacks a notable cast, employing the acting talents of Ashley Lynn Barrett and Logan Cunningham to narrate the story. Both Barrett and Cunningham are relatively unknown actors but they have worked together in Supergiant Games’ previous work, titled Transistor. The small cast suits the story as there are only a few characters involved in the plot and the campaign contains little dialogue. Although I wasn’t overly struck on Bastion, the game was well received by critics who were impressed by the visual effects, the narration and the music.

The plot begins with the protagonist, a silent character named the Kid who wakes up from an apocalyptic event known as the Calamity. The true nature and purpose of the Calamity is explained further in the game but I cannot expand on it in this review as the event is a major plot point that shapes future events. The Kid heads towards the Bastion, a structure that was designed for the people of Caelondia to travel to in the event of an emergency. When he arrives the Kid meets Rucks, an elderly man who instructs the protagonist to collect Cores to power the Bastion.

On his adventures to collect the items, the Kid meets two other central characters named Zia and Zulf. Both of them are Uras, a people who were at war with Caelondians such as Kid and Rucks before the Calamity had occurred. Despite, previous hostilities the four get along while the Kid fulfils his duty to explore dangerous areas and recover the Cores or shards. The characters as well as some animals that the Kid brings back from various areas, mostly hang around on the Bastion and can be interacted with. The peace is broken when Zulf reads a journal that the Kid discovered in his travels and attacks the Bastion before returning to Ura lands.

My main issue with the game is that I didn’t really understand the storyline during the conclusion. I believe this confusion stemmed from the lack of dialogue in the campaign or interactions with the characters. The game also includes various challenges and trials based around the available weapons that are unlocked throughout the storyline. I found some of these to be a frustrating addition rather than a fun exercise because some challenges such as the hammer trial required repetitive, mindless button mashing in order to beat the clock. One thing I did like about Bastion was the unique music style that was composed by Darren Korb. I was especially interested in the vocal tracks such as ‘Build that Wall’, ‘Mother, I’m here’ or ‘Setting Sail, Coming Home’. Overall, I believe it was an interesting game to play but it isn’t an experience that I would consider to be an essential for a gamer to immerse themselves in.

I don't feel I have to wipe everybody out, Tom. Just my enemies.

Greetings, BioShock: Rapture is a 2011 novel by John Shirley. Ken Levin oversaw the writing to ensure the book did not clash with the original source material or the second BioShock game. The novel serves as a prequel to the original game by introducing new characters such as Sofia Lamb or Augustus Sinclair as well as expanding upon existing ones like Andrew Ryan. Some characters were invented solely for the book as they do not appear elsewhere in the series. As BioShock: Rapture was released in 2011, it omits the events of BioShock Infinite, the Burial at Sea episodes and the role that Booker DeWitt and Elizabeth had in shaping Rapture’s future. This is most likely because BioShock Infinite wouldn’t be released until 2013, despite having been worked on a few months after the completion of the original BioShock since 2008. The novel is built around the viewpoints of various individuals but it mainly focuses on Bill McDonagh as the main character and his reactions to Rapture’s fall.

The plot begins in 1945 with Hiroshima and Nagasaki being bombed by the United States. The incidents inspired wealthy entrepreneur Andrew Ryan to build the secret city of Rapture between Greenland and Iceland as he believes that mankind would soon wiped out by nuclear annihilation. As founder of Rapture, he tries to run the city as an atheist, capitalistic society with minimal interference from governing bodies. His plans of a utopia are derailed when he gives Frank Fontaine, a conman posing as an honest business man, the opportunity to become a Rapture citizen. As Fontaine is responsible for the city’s fish supply, he uses the opportunity to smuggle confiscated items such as Bibles into Rapture. While Ryan can’t prove that Fontaine is behind the smuggling operation he remains suspicious of his entrepreneurial rival and waits for him to make a mistake. 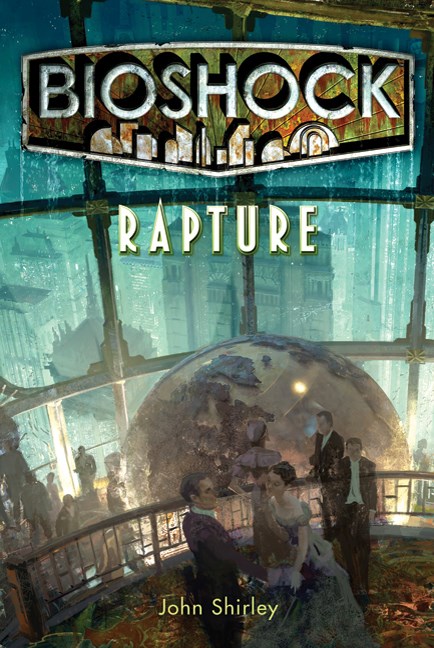 Rapture soon descends into lawlessness with the discovery of a Sea slug that can be used to create a substance called plasmids. The plasmids, named ADAM, give users supernatural abilities such as pyrokinesis or telekinesis but also has an adverse effect on their mental state. Fontaine employs Doctor Tenenbaum and Doctor Suchong to develop the plasmids for Fontaine Futuristics. In order to produce them more effectively, Frank sets up orphanages that turn ordinary girls into hosts, known as Little Sisters, for the Sea slugs. The girls are protected from splicers by their guardians which are called Big Daddies. Fontaine isn’t Andrew’s only problem. Ryan is also troubled by the attempted incursion by psychologist Sofia Lamb who wishes to lead the citizens of Rapture through her cult, the Rapture Family. Therefore, sane Rapture citizens are trapped in the underwater metropolis as splicers of three armed factions fight to control the city.

While reading the novel is not an essential part of the BioShock experience, it is interesting to see how a civilized Rapture functioned and to watch some of characters, such as Sander Cohen or Dr Steinman, lose their sanity. If you are a fan of the series you might enjoy the novel and I would encourage you to read it if you want to learn more about the lore behind the BioShock universe. It should be noted that the book steadily moves from the year 1945 to 1959, ending shortly before Jack’s arrival into the city to find that Atlas and Andrew Ryan are fighting for control of Rapture.

Just relax. It's just like taking a stroll through the woods. 65 million years ago.