Fire in the Sky

Greetings, Fire in the Sky is a 1993 science fiction film that was directed by Robert Lieberman and focuses on the story of Travis Walton’s supposed alien abduction in 1975. The movie stars Robert Patrick as Mike Rogers who is perhaps best known as the seemingly indestructible T-1000 in the Terminator series or as his role as John Doggett in the later X-Files episodes. Other actors who appear in this movie include D.B. Sweeney as the abductee Travis Walton and James Garner as Lieutenant Frank Watters but most other cast members seem to be relatively unknown. The music was conducted by Mark Isham who has been involved in many films during the past decades including Point Break from 1991, Breakfast of Champions in 1999 and the Conjuring in 2013 to name just a few.

The plot begins on the night of the 5th November 1975 in Snowflake, Arizona as a truck is driven recklessly through the quite town and stops suddenly at a local bar. Five men, most of them visibly shaken from an unexplained ordeal, enter the drinking den and take a seat. Mike Rogers, the leader of the loggers, tells his men to keep their stories straight before he rings the police department to inform them of a missing person. Their report draws the attention of Lieutenant Frank Watters, a seasoned detective who is renowned for solving all of his cases, who listens to the men’s tale with interest. The men all agree on the details of what had happened and corroborate everyone else’s account. According to the men, they had just finished their day logging the Arizonian forests as normal and night began to fall as they were on their way home. Travis Walton, one members of the logging crew and a good friend of Mike’s, noticed a red glow in the forest and at first thought it was a forest fire. Mike stops the truck so the loggers can get a better look of the strange light. 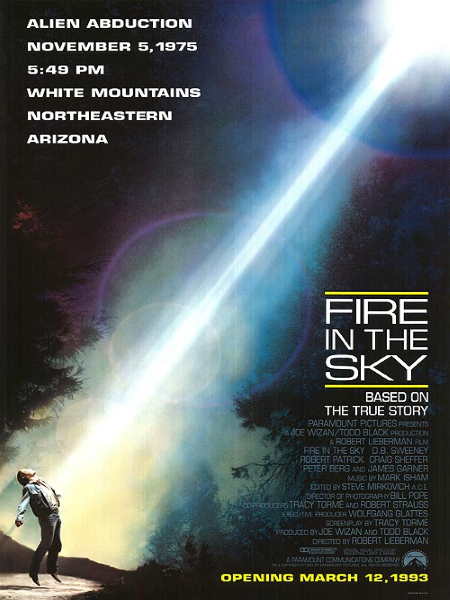 Walton’s curiosity got the better of him and he gets out of the truck despite the pleas and warnings from his fellow loggers. Travis was physically knocked to the ground by the light source and was rendered unconscious. The men began to panic. Mike reluctantly gives in to the pressure and cries to flee from the terrifying sight. He left a defenceless Travis to the mercy of the paranormal entity but the guilt eventually trumps his own fear and Mike drops his men off at a safe location before returning to the startling scene in his truck. Travis and the light were gone without a trace. Watters is understandably sceptical of their claims that Travis was abducted by extra-terrestrials and sets out to uncover the truth. As the days and nights begin to pass, the local residents begin to suspect that the loggers have murdered Travis and the men become ostracized from the society that they once belonged to. Roger’s married life begins to fragment and fracture under the unwanted attention from suspicious neighbours, curious ufologists and the international press coverage the event has brought to their doorstep. A frustrated Mike and the rest of his crew set out to clear their name.

I liked this film but I also realize that due to its subject matter and slow pacing, it wouldn’t have universal appeal. To my surprise, there was very little science-fiction elements within this story compared to what I was initially expecting as it is mainly a drama. The story mostly focuses on the fallout from Walton’s disappearance and the isolation that Mike felt as the society that he lived his life in turned its back upon him. The film took a considerably different approach in how Travis detailed his experiences with the extra-terrestrials. It depicts the aliens as more sinister during a probing scene because the scriptwriter, Tracy Torme, found Walton’s account of flying the ship himself to be too boring. Travis’ story is widely credited to be a hoax and was most likely inspired by ‘The UFO Incident’ staring James Earl Jones and Estelle Parsons which dramatized the abduction of Barney and Betty Hill on 19th September 1961. The production was aired two weeks before Walton’s disappearance.

That Mitchell and Webb Look