Greetings, Jurassic World: Fallen Kingdom is a 2018 movie directed by J.A. Bayona who is perhaps best known for his directorial involvement in ‘A Monster Calls’. It is a direct sequel to 2015’s Jurassic World and is considered the fifth instalment of the Jurassic Park series which began in 1993. The film sees the two main leads for Jurassic World, Chris Pratt and Bryce Dallas Howard, return to their roles as Owen Grady and Claire Dearing respectively. Actors from the original trilogy also return such as BD Wong and Jeff Goldblum of ‘The Fly’ fame reprises the character of Dr Ian Malcolm for a brief cameo. Other actors who are new to this franchise include Isabella Sermon, Ted Levine, James Cromwell, Geraldine Chaplin and ‘Detectorists’ actor Toby Jones. Michael Giacchiano is also among the crew to have returned and conducted the music for this sequel.

The plot starts three years after the disastrous happenings in Jurassic World in which the park falls much like the original attraction had decades prior and the dinosaurs have free reign of the island. A small team had been sent to Isla Nublar to retrieve DNA from the slain Indominus Rex which had been dragged to its watery demise by the enormous Mosasaurus. Believing that any creature that had inhabited the lagoon had long since died in the past three years, a small aquatic vehicle is sent in to the enclosure as the ocean gates are opened. After locating a bone of the Indominus, the crew send it up to the surface and it is then taken away by a helicopter. The two man submarine is suddenly attacked by the Mosasaururs which uses the opportunity to escape into the ocean. In mainland America, Dr Malcolm is invited to speak at a U.S. Senate hearing as it has been discovered that the island of Isla Nublar is about to be subjected to a powerful volcanic explosion. The volcanic rupture will most certainly wipe out all of the dinosaurs on the island. 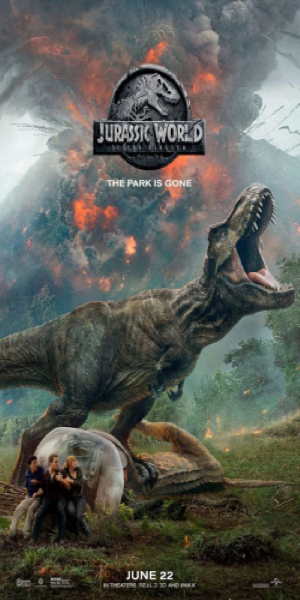 Malcolm believes that it is for the best that the dinosaurs go extinct once again and determines that the late John Hammond was wrong to have brought them back to life with his cloning process. Former operations manager of Jurassic World, Claire Dearing, completely disagrees and sets up a group to save the dinosaurs. The U.S. Senate chooses not to save the dinosaurs but Claire’s activism hasn’t gone unnoticed. She is contacted by the aging Sir Benjamin Lockwood, the former partner of Hammond. Lockwood and his aid, Eli Mills, have come up with a plan to save the dinosaurs and relocate them to a separate island. Claire agrees to assist them but she needs the help of her former paramour and previous raptor trainer, Owen Grady, if she is to have any success in relocating the prehistoric creatures. After an initial rebuff, Owen is eventually persuaded to go back to Isla Nublar to save the dinosaurs. He is especially motivated to rescue his own raptor, named Blue, who was left stranded there during the evacuation of the island.

Fallen Kingdom had a promising start but unfortunately it falls apart fairly quickly as it relies heavily on well-worn cinematic tropes, one dimensional new characters and forced nostalgia. The inclusion of the T-Rex from the original Jurassic Park movie was used well in Jurassic World but it has been overdone in this latest sequel to the point of almost being comedic or farcical. The main problem with this series is that the storyline has been trodden over already so many times in sequels which decrease in quality as they go along. It is no longer the fresh idea that had been set out in Michael Crichton’s novel when it was first published in 1990. None of these follow ups can match the magic of the original and most likely never will. The last of the Jurassic World trilogy is set to be released in 2021 with the title of Dominion. It will reportedly see Sam Neill, Laura Dern and Jeff Goldblum return as Dr Grant, Dr Sattler and Dr Malcolm. In my opinion, the series should have been left at Jurassic World as that was a fitting return to a beloved franchise.

This is another nice mess you've gotten me into!