Greetings, Half-Life is a first person shooter video game from 1998 that was created by the game developer and publisher known as Valve. Now well regarded as one of the best video games ever made, Half-Life was the first project released by Valve and several expansion packs and sequels, such as Blue Shift, were spawned off the back of its outstanding success. The company would go on to create or publish further classic games such as the Counter-Strike, Team Fortress, Left for Dead and Portal series as well as the sandbox game Garry’s Mod. With the protagonist and cult icon, Gordon Freeman, being a silent lead there is not a particularly large or noteworthy cast of voice actors and actresses involved. Some of the talent behind the scenes include Kathy Levin as the voice for the HEV suit as well as Mike Shapiro as the friendly security guard, Barney Calhoun, and the mysterious G-Man. The atmospheric music was composed by Kelly Bailey who has mostly worked on other Valve properties.

The plot begins with a long and famed, among gamers at least, tram ride in which the physicist Freeman is transported inside the secretive Black Messa Research Facility. After clearing security and putting on the necessary hazmat suit, Gordon is tasked with brining an unusual material in for experimentation. He is instructed by fellow scientists to place the substance under a giant machine for analysis. The machinery explodes causing what is described as a ‘resonance cascade’ which opens up a portal to dimension Xen. The cataclysmic event causes the facility to descend into ruins. Freeman miraculously survives the explosion but he finds himself thrust into action as he must fight his way past terrors such as zombifed colleagues, automated turrets and alien monstrosities that came from the portal. 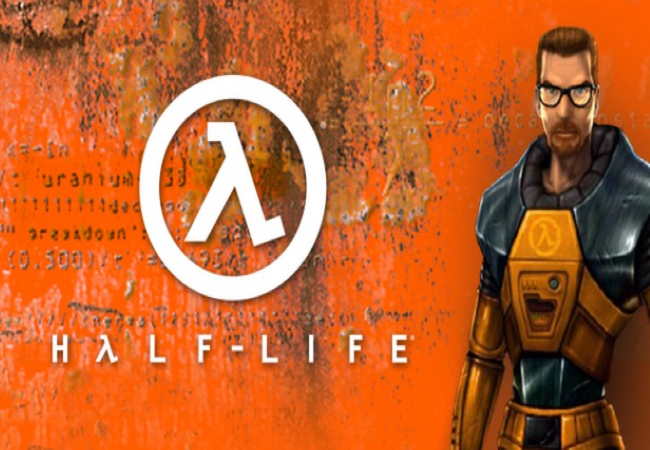 It isn’t long before the military arrives on the scene with relieved scientists cheering on their apparent saviours. The optimism quickly turns to dismay as the soldiers begin gunning down witnesses and the scientists come to understand the horrifying reality that the government isn’t there to help them but to wipe them out as part of a cover up. As Gordon makes his way to the surface, he is contacted by fellow scientists in the Labmda Complex who believe that they have found a way to shut down the portal but they explain that they will need help in doing so. Freeman answers the call for aid and delves further into danger as he encounters even deadlier foes along his path from both the opposing alien and human forces.

Half-Life provides a good range of enemy AI for the player to combat including slow moving zombies, long tongued barnacles and aggressive headcrabs, most of which thankfully made their way into the direct sequel and continuing episodes. I really enjoyed this game and took a great liking to the retro feel after playing it a few decades after its release. I had great fun with its imaginative sequels as well which expand on the story nicely. It is a bit of a shame that Valve don’t seem to have plans to finish the story, which they left on a dark note in Episode 2, as the world they created is a very interesting one to explore. Despite releasing a prequel game called Half-Life: Alyx as recently as 2020, I believe it is unlikely that the fans will ever get the sequel they clamoured for. After years of the tongue in cheek ‘Half-Life 3 confirmed’ meme being plastered over the internet, it may be for the best as a third entry would find it very difficult to live up to the hype or reputation it is expected to have. At the end of the day, the Half-Life games will always be there to fall back on if players are feeling a bit nostalgic and in the mood for a good old fashioned shooter.

There Will Be Blood