Greetings, 10 Cloverfield Lane is a 2016 film and the second instalment in the Cloverfield anthology franchise which began with the 2008 movie, Cloverfield. Despite being of the same series, the sequel doesn’t use the found footage style that the original was famed for but utilizes a more traditional third person narrative. The cast is small in number but boasts a highly talented membership which includes John Goodman, Mary Elizabeth Winstead as well as John Gallagher Junior as the main trio. Bradley Cooper can also be heard as the voice of the main protagonist’s ex-boyfriend while Suzanne Cryer has a brief role as a disease stricken neighbour. Other instalments in the series include a 2018 film named the Cloverfield Paradox and another, with the working title of Overlord, scheduled for release in October of this year. The soundtrack was scored by Bear McCreary who had previously conducted the music for television shows including the Walking Dead and Battlestar Galactica.

The film begins with a woman called Michelle clearing her possessions out of her home after she breaks up with her boyfriend. She decides to drive far away from New Orleans and travels as far as rural Louisiana when the radio stations begin reporting that major cities are suffering from unexplained blackouts. As the reports begin to flood in, Michelle is hit by a speeding truck and the impact knocks her car off the road. The collision causes her to fall into a state of unconsciousness and Michelle wakes up to discover she is being held in a secure room that is not dissimilar to a cell. The protagonist realizes to her horror that she has been handcuffed to the wall and that her phone is placed on the other side of the room. The wounds she had sustained from the vehicular accident had also been tended to. It isn’t long before the door is opened and a man named Howard makes an appearance.

Howard explains to a distressed Michelle that she has been placed in a safe location, an underground bunker, as the world up above is now uninhabitable. He believes that the air was poisoned by a nuclear or chemical fallout and theorizes that the attack was carried out by Extra-terrestrial or Russian forces. Michelle is hostile towards Howard in the beginning, even managing to physically assault him in her captive and wounded state. As time goes by she becomes more sceptical of Howard’s story as she clearly hears a roaming car above her room but nonetheless she begins to calm down. Howard decides that she is now free to explore the rest of the bunker and introduces her to fellow resident Emmet before providing evidence of the fallout to Michelle. He takes her to the viewport of the exit hatch and shows her two dead and deteriorating pigs that had been caught up in the attack. Michelle is still unbelieving and decides, during their first dinner together, to steal Howard’s keys and try to escape.

I really enjoyed this film and consider it to be a big improvement upon the original. I will most likely remember this film in the years to come while I can only recall the general gist of the previous instalment which didn’t have much in the way of memorable or interesting characters. I liked the tense atmosphere that 10 Cloverfield managed to create and that it could still entertain despite its very limited setting. The three actors did a great job in carrying the movie forward and I thought that John Goodman gave a particularly noteworthy performance as the creepy and unstable Howard. I aim to watch the sequels too at some point although I am aware that the most recent entry, Cloverfield Paradox, was panned by critics.

I did warn you not to trust me.

Greetings, King Solomon’s Mines is a novel from 1885 and was written by British author Sir H. Rider Haggard. Haggard, who was born in 1856 and died in 1925, is recognized as being a pioneering figure of the Lost World genre with King Solomon’s Mines believed to be one of the first novels of its kind. This book was the first to introduce the protagonist, Allan Quatermain, to the literary world and would expand to include several more works in the series. It is presented in a first person narrative through the recounting of the tale by Allan himself. Solomon’s Mines would also go on to inspire other classic works such as Edgar Rice Burroughs’ ‘The Land that Time Forgot’ and Arthur Conan Doyle’s ‘The Lost World’.

The plot begins with Allan Quartermain, an English Big Game Hunter who has a well-earned reputation as an excellent marksman, living in the South African city of Durban. Allan is approached by two men, one is a British aristocrat named Sir Henry Curtis while the other is Captain Good, an Englishman of a military background. Curtis explains that his brother had been exploring the region for the elusive King Solomon’s Mines and the wealth of treasures held within them. The brother had gone missing in his travels and the two men had come looking for him. The duo offer Quatermain a job in escorting them through the dangerous terrain and promise him a share of the riches after they reach the mines. Allan, intrigued by the fortunes to be gained, accepts their offer and prepares to lead an expedition with a few of the indigenous population to help along the way. Before the team can leave, a native named Umbopa had heard about their plans to find the mines and is very adamant that he join in on the expedition. 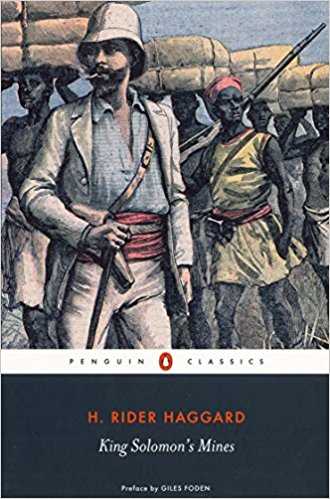 It isn’t long before casualties begin to rise among the helping hands as the explorers travel through the treacherous lands filled with dangerous animals and conditions that threaten to perish them all. The team struggles through and eventually encounter a group of hostile natives called the Kukuana from the lush lands of Kukuanaland. The indigenous peoples threaten to kill the heroes until Captain Good, with his quick thinking, removes his false teeth and frightens the isolationist tribe who are under the impression it was a magical action. All the protagonists are dubbed the ‘White men from the stars’ by the fearful warriors as they believed Quatermain, Good and Curtis were otherworldly mystical beings. The British trio are brought before the local ruler, a wicked king by the name of Twala and secrets buried long ago begin to resurface after the meeting takes place.

I really enjoyed this book and it has made me interested in exploring other classical novels of the same era. Surprisingly, Solomon’s’ Mines was far ahead of the social attitudes of its time in that there was an interracial romance between a local woman named Foulata and Captain Good though it is all too aware of the controversy that the relationship would have caused in Britain. The character of Quatermain has still remained in the public’s attention since his inception in 1885 as the story has been adapted into several movies throughout the decades. Allan has also appeared in many other works such as the film version of Alan Moore’s the League of Extraordinary Gentlemen in which he is portrayed by Sean Connery.