Greetings, Cujo is a horror novel by world renowned author Stephen King which was published in 1981. The book was the 10th book published in King’s extensive bibliography and, rather interestingly, he does not recall writing most of it as Cujo was produced during a period of intense narcotic use in his career. Like most other King stories, the plot was adapted into a film that received mixed reviews during its release in 1982 but the movie has since earned itself a cult following. The film stars Dee Wallace, Danny Pintauro and Daniel Hugh-Kelly as the three leading actors. The two incarnations are reportedly similar in nature bar the endings in which the movie adaptation has a more positive conclusion than its source material.

The story begins in the fictional town of Castle Rock in Maine and it revolves mainly around two families, the Trentons and the Cambers. The Trentons consists of advertising man Vic, his stay at home wife Donna and their four year old son Tad who is affectionately called ‘Tadders’. They are from a middle class background and are originally from New York City, having recently moved to Castle Rock for a quieter life. The lives of the Trenton family are upended when the advertising agency that Vic co-owns suffers a major setback. A cereal brand that he helped promote and specifically aimed at kids had hospitalized some children once they had consumed the product. Vic and his business partner, Roger Breakstone, must come up with a clever ad campaign to address the problem or face bankruptcy. As things look bleak on the work end of Vic’s life the home front is even worse as he discovers that his wife had been engaging in an affair with a man named Steve Kemp. Donna thoroughly regrets what she did and broke the clandestine relationship off with Steve, who proved to be incredibly volatile in his rejection, but Vic is furious and heartbroken by the situation nonetheless. 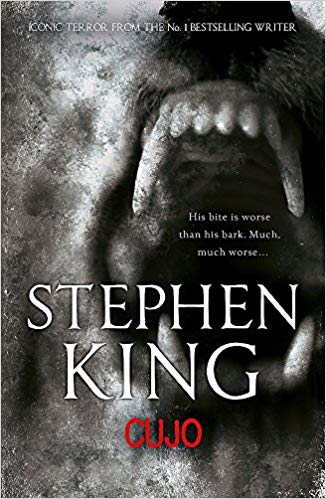 The Cambers on the other hand are from a lower socio-economic class. Joe, the father, is a mechanic who owns a garage in the outskirts of the Castle Rock. His wife, Charity, is another unfulfilled stay at home mother and the son is a ten year old called Brett. The titular Saint Bernard, the well-mannered Cujo, belongs to the Camber family and he has a particularly special bond with Brett. Charity wins $5,000 in the lottery and convinces her reluctant husband to allow her and Brett to spend the money to visit her sister, Holly, in Connecticut. She wants her son to see the world and is somewhat concerned about Joe negatively influencing Brett as he heads into his teenage years. Shortly before the Cambers are about to leave Joe alone with Cujo for their holiday, Cujo chases a rabbit through their fields. The witless rabbit flees the dog by heading into a small cave that Cujo can only fit his head into. The dog startled some bats inhabiting the cave which causes one to bite him on the nose. A panicked Cujo retreats and heads home with a sore snout. Slowly but surely the rabid infection leads the good natured dog on a murderous rampage as the disease takes control.

I really enjoyed this novel and was interested to discover that while it is also tells the story of a deranged dog with rabies, it is essentially about the everyday domestic lives of the Trentons and Cambers. King wrote more extensively about the ups and downs of these two families than I was expecting. The supernatural elements are limited in Cujo and are only really suggested as a theoretical aspect rather than being solidly confirmed as existing in this world. For instance, it is implied that former police officer and serial killer known as ‘The Castle Rock Strangler’ Frank Dodd has come back from the dead to haunt the citizenry of the small town but the character never makes an appearance himself. This is a solid book that sits well among King’s other works. If you like his other novels then you would most likely get a kick out of Cujo too.

Pathetic earthlings. Hurling your bodies out into the void, without the slightest inkling of who or what is out here. If you had known anything about the true nature of the universe, anything at all, you would've hidden from it in terror.