Greetings, Lonesome Dove is a Western novel by Larry McMurtry. It was published in 1985 and while it is the first published book in the Lonesome Dove series, the novel is the third instalment in terms of chronological order. The story begins in 1876 in the fictional Texan border town of Lonesome Town of Lonesome Dove, following the adventures of Captain Woodrow F. Call and Captain Augustus McCrae. The two character are now older men as decades have passed since the events of Dead Man’s Walk and Comanche Moon. Both Call and McCrea were famous Texas Rangers who gave up their positions in law enforcement in order to run a livery stable. I have written about these two novels on this blog a few years ago and I do remember giving them positive reviews. Lonesome Dove continues with characters who were expanded upon in Dead Man’s Walk or Comanche Moon, while also introducing new ones.

The plot begins with Jake Spoon, an old friend of the two protagonists, traveling into Lonesome Dove. Spoon was fleeing from law enforcement as he had accidently shot and killed a dentist in Arkansas. He convinced both Woodrow and Augustus to drive a cattle herd to Montana, making them the first settlers in the frontier. The two ex-rangers decided to form a company of men and head out. Call is attracted to the idea as life in Lonesome Dove had become dull as he had spent years living in the town and all of his competitors had died. Gus is motivated by the opportunity to find his old love, Clara Allen, and rekindle the romance as the journey will take him to her location in Ogallala. 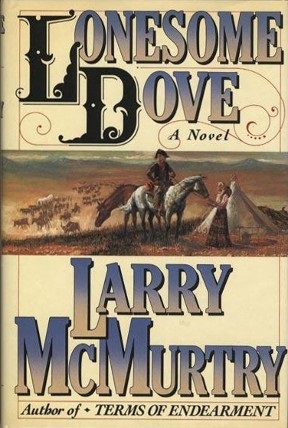 As the company sets out, Call learns that the womanizing Jake intends to take the local prostitute with them in the journey. The prostitute named Lorena had succumbed to Spoon’s charms and his promise that he would take her to San Francisco. The cattle drive will take the herd months to complete as they are trekking across America and the dangers mean they will lose men along the way. Spoon is also troubled by the fact that he is being hunted by the Arkansas sheriff known as July. The sheriff has his own problems as his unfaithful wife called Elmira decided to leave him once he set off on his travels and look for her old flame, named Dee Boot, in Ogallala. As such July’s incompetent deputy Roscoe is reluctantly sent off to tell the sheriff of his wife’s disappearance.

While I did feel that the book was slow at times and that a few scenes were unnecessary, I did enjoy it overall. It is a long novel that spans over 800 pages and it contains numerous characters that do not add to the plot or seem to serve any purpose except for expanding the fictional world. Lonesome Dove is also a 1986 Pulitzer Prize winner and its success lead to a television adaptation staring Tommy Lee Jones, Robert Duvall and Anjelica Houston. I am looking forward to the final novel called the Streets of Lerado which was published in 1993.

We all make choices, but in the end, our choices make us.

Written by Falcon, Wednesday 27 May 2015
Comments

Greetings, the Walking Dead: Season Two is a point-and-click game from Telltale. It was released in an episodic format during the months of December 2013 to August 2014. Like the first game, Season Two also contains five episodes in total which, when connected, create an overarching storyline with a few surprising plot twists. The story focuses on Clementine’s adventures after the original season and it is effected by the decisions the player made in the first game as well as the 400 days DLC. Even though new characters are central to the storyline, previous characters are mentioned in passing and it is greatly influenced by Lee’s shadow. It still retained some of its notable features such as the limited amount of time allowed to explore the conversation branches and forcing the player to make difficult decisions, especially regarding the last choice.

The plot begins several months after the end of season one and follows the remnants of the survivor group which consists of Clementine, Omid and a pregnant Christa. At the very beginning Omid is killed by a scavenger, leaving only the two to continue to their destination of Wellington. The story skips forward to 16 months and a depressed Christa is the only left person that Clem can trust. Despite this, their relationship has become strained as Clementine’s carelessness had resulted in Omid’s death. Christa, who lost her child, is also removed from the story as they come under attack from a group of scavengers. Her fate is left unknown as Clem manages to escape the area but she falls into a turbulent river, washing her up in a different location. 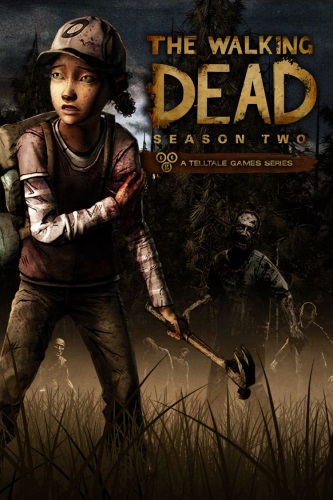 At this point Clem is alone and hungry. During her travels she meets a dog named Sam. It is a possible reference to Sam of the Sam and Max videogame series that Telltale was behind, considering the other references made to the franchise in the Walking Dead. The relationship is short lived as the dog bites her when she tries to open a can of food, causing her to accidently injure it in her defensive reaction. The player can either chose to either leave the fatally wounded Sam on the pikes or end his suffering quickly. Clem tries to make her way to a safe location until she is found by survivors named Luke and Pete. They are initially wary of her, mistaking the dog bite for a walker’s but decided to bring her back to their cabin. She eventually proves that she wasn’t bitten by the walker and the group from the cabin grow to trust her but the undead aren’t their only concern as Clem learns about Carver.

Like the original, the music was composed by Jared Emerson-Johnson who is also responsible for a number of Telltale soundtracks. There Walking Dead contains many interesting and well written characters with talented voice actors or actresses behind them. The character of Luke is a particular favourite of mine. This ensures that it is harder for the player to make decisions as they have formed emotional connections with the characters. I am not sure how Telltale will make season three as the storyline will be fractured given the choices made throughout the two games and the various endings that can be unlocked. It might revolve around new characters or it could still continue with Clem. Whatever the next instalment will be, I trust Telltale will create a brilliant game and I look forward to what the future will bring.

Had to be me. Someone else might have gotten it wrong.