Greetings, El Camino: A Breaking Bad Movie is a 2019 feature film and serves as the epilogue of the Breaking Bad television show which ran from 2008 to 2013. El Camino was written and directed by Vince Gilligan, the creator of the series, and features a considerable number of actors from the original cast. Aaron Paul returns to portray his most famous role of the former meth cook, Jesse Pinkman. Others come back to reprise their characters as well such as Jonathan Banks as the stoic hitman Michael Ermhantraut, Jesse Plemons as the unnervingly polite henchman Todd Alquist and Robert Forster as Ed Galbraith the relocation expert for wanted men. This would prove to be one of Forster’s final film roles as he passed away on the day of its Netflix release on 11th October 2019. The music was composed by Dave Porter who had also worked on the original television series and the prequel show, Better Call Saul, which is based on the dodgy criminal lawyer Jimmy ‘Saul Goodman’ McGill. The review below contains major spoilers for the Breaking Bad storyline.

The plot begins in a flashback in which Jesse and Mike are discussing their planned departure from Walter White’s meth empire. Jesse states that he wants to start a new life, feeling regret for his role in the drug trade, and asks Mike what he would do in his situation. Mike replies that if he were younger he would relocate to Alaska but warns Jesse that he could never truly be absolved of his past sins. The film then segways into the immediate aftermath of ‘Felina’, Breaking Bad’s 62nd and concluding episode. An ecstatic Jesse Pinkman flees from the site of his captor’s base after White’s deadly assault on the Aryan Brotherhood’s compound sets him free. He manages to avoid police in one of his killed jailor’s car, an El Camino, and finds sanctuary in the home of his drug addicted friends Skinny Pete and Badger. A dishevelled and broken Jesse crashes at the home of his shocked friends, raiding their fridge and devouring their food before collapsing from exhaustion in one of their bedrooms. 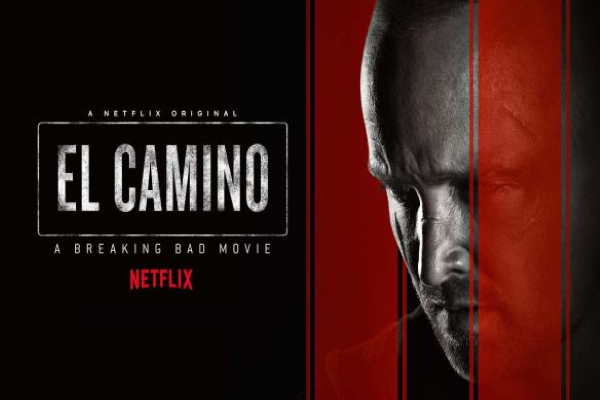 Skinny Pete and Badger had been unaware of Jesse’s imprisonment and the forced labour he was pressured to endure as a meth cook at the hands of the Aryan Brotherhood. They turn on the news to discover that Walter White’s identity as the drug lord Heisenberg had been exposed and that he had been fatally injured in the shootout. The news reporter advised that the police were on the lookout for Jesse as a person of interest. Once Jesse wakes up the following morning, the three agree to hide the El Camino that Pinkman had stolen from his captor Todd Alquist as it was being sought after by law enforcement. Jesse decides that he needs to follow Michael’s advice that he had been given so long ago and head for Alaska. To do so, he needs to acquire a substantial amount of money so the mysterious Ed Galbraith can organize his disappearance and Jesse can finally begin his new life.

Despite a slow start, I really enjoyed this concluding arc of the series even if it did seem to be a somewhat unnecessary addition to it. I was very curious to see what the team behind it would do for a story after so many key characters, like the antagonist Gustavo Fring, had already been killed by this point and because the plot had seemingly been tied up nicely several years prior. The spectre of Walter White noticeably hangs over the film, which isn’t surprising given his iconic partnership with Pinkman, but it didn’t prevent me from enjoying it once I accepted this was solely Jesse’s story. I imagine most Breaking Bad fans would be entertained by this as it treats the source material with respect and provides fans with a chance to see some of their favourite characters again years after the whole experience was believed to be over.