Greetings and happy Halloween! Today’s blog update is in keeping with the spirit of the holiday by being a science fiction horror film from 1982 as I’m reviewing John Carpenter’s The Thing. It is based off of the 1938 novel ‘Who goes there?’ by John W. Campbell Jr. The cast includes Kurt Russell as the protagonist known as MacReady, Donald Moffat, Wilfred Brimley and Keith David. Out of the entire main cast the one I am most familiar with is Keith David who I know as the voice of David Anderson in the Mass Effect series as well as him having performed in the Call of Duty series. The music was composed by Ennio Morricone, who is best known for creating the score for Italian Westerns including the Dollars trilogy and the Good, the Bad and the Ugly.

The plot is set in the Antarctic and begins with a Norwegian helicopter chasing a dog that is heading towards an American research station. The American crew are confused by the actions of those in the helicopter as they are shooting at the dog but they don’t manage to hit it and are killed in the process. With the pursuers dead, one shot by an American as the Norwegian would not stop firing and the pilot did not survive an explosion in the helicopter, the researchers take the dog into the kennels alongside the other dogs. MacReady, in search for answers as to why the attackers were trying to kill a dog, is sent to explore the nearby Norwegian station. When he lands his helicopter at the research facility MacReady discovers that the building has been destroyed with fire and finds a charred humanoid corpse with two faces. MacReady decides to take the corpse back to base to be examined by another character called Blair in which the autopsy revealed that the mutated body had normal human organs. 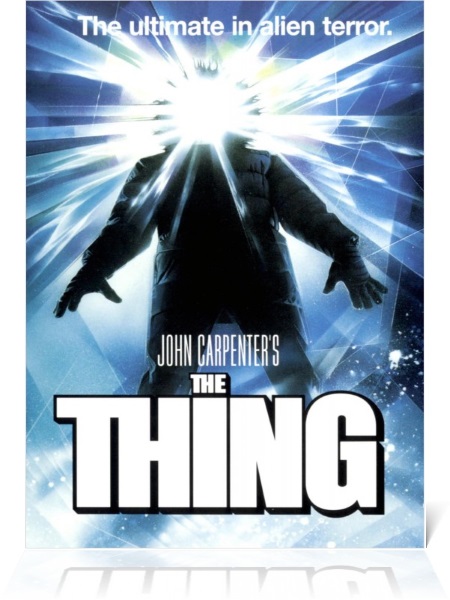 The story turns its attention towards the rescued dog and reveals that it in reality it is a shape shifting monster that had managed to escape its death at the hands of the Norwegians. The Americans become aware of its presence when they hear the dogs howling as the creature kills the other animals that had been locked inside with it. MacReady and the research team couldn’t prevent the monster from fleeing the kennels which means that it is stalking the protagonists in their own base and is able to take anyone of their forms. As such the team begin to violently turn on each other under the psychological pressure as they suspect and fear that one of them could be the monster in disguise. It is up to MacReady and the others to identify the monster and kill it or suffer the same fate as members of the Norwegian research team.

The film relies on stop-motion animation, due to a lack of advancement in CGI technology at the time, which gives the movie a unique feel that is genuinely creepy and memorable. There was also a prequel made in 2011 that focuses and elaborates on the Norwegian’s experiences with the monster but it isn’t regarded as a particularly good movie. Despite the criticisms of the prequel I still might watch it at some stage in the near future as even the original Thing wasn’t regarded as a particularly good movie at the time and is now considered a cult classic. I can say for certain however that the 1982 version of the Thing was an enjoyable experience and is worth watching.

Vampires, gargoyles, warlocks, they're all the same — best when cooked well.

Greetings, Kick-Ass is a comedy film that was based off a comic book with the same title and it was released back in 2010. Cast members include Aaron Taylor-Johnson as the superhero and protagonist Kick-Ass, Nicholas Cage as another hero known as Big Daddy and Chloe Grace Mortez as Hit Girl, Bid Daddy’s eleven year old daughter. On the side of the villains Christopher Mintz-Plasse as Chris D’Amico son of the crime lord Frank D’Amico, played by Mark Strong. It is the first film in a possible trilogy with the second movie being released in 2013. The original soundtrack for both films was composed by Henry Jackman, the same man who wrote the music for X-Men: First Class.

The plot begins with Dave Lizewski, an American teenager living in New York City, who desires to follow in the footsteps of his fictional heroes and become a real life superhero when he realizes that no one is standing up to the local criminals. As such he creates a suit armed with batons and calls himself Kick-Ass, ready to face danger without having any adequate training. His first attempt to stop a crime was highly unsuccessful as he was stabbed and the thieves managed to escape when he was injured. As such he is landed in hospital but the setback Dave doesn’t convince him to stop his crime fighting activates and soon he becomes an internet sensation after healing from his injuries. He continues to train himself despite it being apparent that he lacks knowledge of combat or professional technique and that the consequences of being overwhelmed were made clear in his first failed attempt at being a superhero. 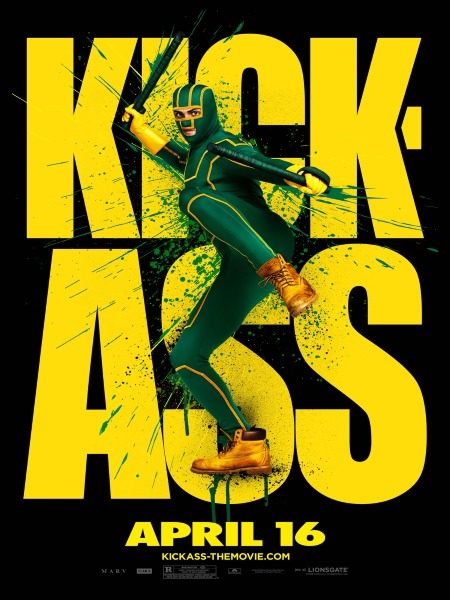 Kick-Ass soon finds himself tackling a gang of drug dealers that he can’t defeat due to his amateur skills but this is when he is encounters two professional superheroes for the first time. Lizewski is rescued by Big Daddy and Hit Girl who were targeting the drug dealers at the same time as he was. The two characters are different than Kick-Ass in that they are prepared to and are able to efficiently kill criminals with specialized weapons as well as combat prowess. Hit Girl is only eleven years old at the time of the story and had been trained by Big Daddy to become a skilled fighter for his desire for vengeance on the antagonist of the film, Frank D’Amico. The drug cartel were only a small gang and Big Daddy was after the main kingpin of New York, D’Amico, who had been the source of pain in his past life that he wished to avenge.

Kick-Ass 2 sees the return of much of the original cast such as Taylor-Johnson, Mortez, Mintz-Plasse as well as introducing various other members including Jim Carrey. While I enjoyed this film I believe that the first one was better, possibly in part due to the omission of some characters due to the previous plot. It has a similar feel that Kick-Ass managed to deliver as it shares the same type of elements that the original had such as crude humour as well as containing violent scenes.

It takes some place a few years after the events of the first movie in which Dave Lizewski and Mindy Macready, the real identity of Hit Girl, are now in the same school. The two are bored of their normal lives that they had been living since hanging up their costumes and retiring from crime fighting. New York City had changed when Dave and Mindy had turned their backs on superhero business as many ordinary citizens were inspired to fill their place during their absence by becoming heroes. This leads to the formation of superhero teams that go around preventing crimes including Justice Forever which is lead Jim Carrey’s character, Colonel Stars and Stripes. Meanwhile the D’Amico criminal syndicate falls into the hands of Chris D’Amcio after he accidentally kills his mother. With all of his inheritance he claims a new super villain identity, builds up an army of villains with which he wages war against Justice Forever and targets Kick-Ass in particular.

There is a post-credits scene to suggest that a sequel is planned or there is at least room for a potential one. A third movie could be made in theory but this may never happen due to the poor box office performance of the sequel according to Mintz-Plasse. Overall, both films are enjoyable to watch and I hope to see another movie in the franchise to finally conclude the storyline of Kick-Ass and Hit Girl with a proper ending, even if it wasn’t as entertaining as the original.

I'll give you a strawberry if you keep this a secret.