From Dusk Till Dawn

Greetings, From Dusk till Dawn is a 1996 horror crime thriller that was directed by Robert Rodriguez who is known for various films such as Sin City, Machete and the Mexico trilogy. The movie has a few well known faces which include George Clooney as the protagonist Seth Gecko and Quentin Tarantino as his unhinged brother Richard. Harvey Keitel stars as Jacob Fuller, a pastor facing a crisis in his faith towards God with Juliette Lewis and Ernest Liu as his children, Katherine and Scott. Other members of the cast consist of Selma Hayek, Danny Trejo, Tom Savini and Fred Williamson. The music was conducted by Graeme Revell who has composed the soundtrack for a great many works with the Fog, Lara Croft: Tomb Raider and Mighty Morphin Power Rangers: The Movie among them. Tito and Tarantula also collaborated to the soundtrack and appeared in the film as well.

From Dusk till Dawn begins with a Texas Ranger by the name of Earl McGraw who stops at a small convince store and speaks to a lone clerk that he is acquainted with. McGraw warns that two runaway thieves by the name of Seth and Richard ‘Richie’ Gecko are supposedly heading their way and that they have a hostage with them. The Texas Ranger excuses himself from the conversation to use the lavatory. The clerk is confronted by the two thieves, who had arrived before McGraw, and demanded that the cashier get rid of the police officer. The Gecko brothers were disguising themselves as customers in the back of the room and had subtly taken two customers hostage. Earl returns to the counter but is quickly gunned down by Richard who swears that the clerk was giving him a coded message, warning the Texas Ranger about the brothers’ presence. 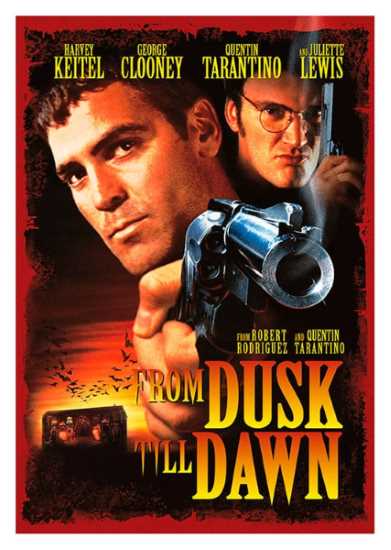 The situation quickly delves into a shootout between the cashier, who has since had the opportunity to grab a gun from a safe, and proceeds to shot Richie in the hand. The hostages flee in the midst of this conflict while Seth manages to engulf the clerk, as well as the store, in flames by setting fire to toilet paper and shooting the selection of alcohol behind the counter. A wounded Richard and Seth manage to make their way to a motel along with their original hostage, a bank clerk named Gloria that they had secured in their car’s boot. Seth leaves his brother and hostage in their room to pick up some food for them all. As he returns, Seth quickly realizes that the deranged Richie had sexually assaulted and killed Gloria in his absence. Seth is appalled by what happened but improvises in his scheme to get into Mexico. The two brothers kidnap their motel neighbours, Pastor Jacob Fuller and his two children, forcing the Fuller family at gun point to drive them in their RV into Mexico.

From Dusk Till Dawn is a fun, action packed film with a twist that would have surprised audiences at the time but is probably well known by cinemagoers now. The actors and actresses give a solid performance throughout the film with Harvey Keitel providing the most memorable acting in my opinion. The film spawned two direct to video instalments which were unsurprisingly considered of lower quality than the original. A video game which take place after the film’s conclusion was also released in 2001 to mediocre reviews. More recently a Netflix production, currently consisting of three series, is also in existence which stars Robert Patrick and Danny Trejo in its cast. The series premiered in 2014 and the third season was launched in late 2016.