Greetings, ‘Silver Bullet’ is a movie from 1985 that was directed by Dan Attias, which is currently the only feature film that he has directed in his career, and it is based on the Stephen King novella, ‘Cycle of the Werewolf’. The book had only been published two years earlier in 1983 and skews early on in King’s bibliography. The movie has a considerable cast, staring the likes of Corey Haim, Gary Busey, Megan Follows, Terry O’Quinn and Everett McGill who may be best known for his reoccurring role on Twin Peaks. The music was composed by Jay Chattaway who is mostly known for his work on several Star Trek series including Next Generation, Voyager and Enterprise.

The plot is set in the quiet town of Tarker’s Mills, Maine, and begins when a lone railroad worker by the name of Arnie Westrum is working late into the night. The isolated Arnie is slaughtered by an unseen attacker, the result of which severs the head from his body. His mangled remains are found the next morning to the shock of the residents in the sleepy little town. That would prove to be only the first murder and the killer would keep returning to pick off unsuspecting locals. Among the victim’s is Brady Kincaid, a close friend of the wheelchair bound child Marty Coslaw. The latest murder is the last straw for the people of Tarker’s Mills and, having grown dissatisfied with the unsuccessful efforts of the local sheriff Joe Hales, they form a vigilante group. Joe, fearing what an unruly mob could do in the name of justice, tries to stop them but is ultimately powerless to reel them in. The hunt goes disastrously for the vigilantes in which some are killed by the attacker they sought. 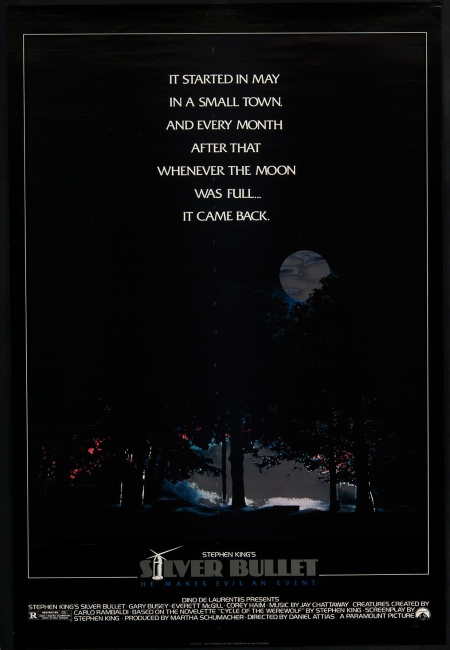 With the murderer still on the loose, Hale orders a curfew to be put in place and cancels any official 4th July celebrations in the interests of public safety. The Coslaw family decide to hold their own celebration and Marty’s eccentric uncle, Red, is invited to join in on the festivities. Red gifts Marty with a custom built wheelchair, complete with motor engine, and named it the ‘Silver Bullet’ upon delivering it to his nephew. He also gives Marty some fireworks, hoping that it would help cheer him up after the death of his friend and being confined to his own home. Marty is thankful for the presents and sneaks out of his room that night to let off some fireworks at a bridge some miles away from his home. He isn’t alone. The fireworks draw the attention of the werewolf. A terrified Marty, thinking quickly, fires a rocket at the creature once he sees it. The firework lodges in the werewolf’s eye and explodes but, as Marty flees, it is revealed that the monster is still alive.

‘Silver Bullet’ is a solid werewolf movie overall and worth a watch for fans of lycanthropes but it wouldn’t be on par with the often touted pinnacle of werewolf movies, ‘An American Werewolf in London’. The book, which is King’s shortest novel as it is comprised of only 127 pages, and the film are fairly similar in terms of plot. While they both attempt to give a voice to several characters in the larger setting of the town, it mostly focuses on Marty and his unusual uncle as he accidently uncovers the identity of the werewolf. If you’re looking for a werewolf movie to watch and have already seen some of the more famous names in the genre, I’d certainly recommended giving ‘Silver Bullet’ a go.

It was the boogeyman.