Army of the Dead

Greetings, ‘Army of the Dead’ is a 2021 film by Zack Snyder, the director behind some notable titles including ’300’, ‘Watchmen’ and ‘Sucker Punch’ as well as being involved in the DC Cinematic Universe. This film is an interesting concept as it manages to serve simultaneously as a zombie flick and a heist film set in the colourful background of Nevada’s Las Vegas. It stars an ensemble cast with Dave Bautista being the most well-known member as he became a household name due to his role as Drax in Marvel’s ‘Guardians of the Galaxy’ back in 2014. Ella Purnell, Omari Hardwick, Ana de la Reguera, Theo Rossi and Matthias Schweighofer are also portraying main characters. The music was composed by Tom Holkenborg who has worked on many previous projects such as ‘’Mad Max: Fury Road’, ‘Deadpool’ and ‘Godzilla vs. King Kong’.

The story begins when a military convoy heading from the mysterious government facility, Area 51, is travelling along the road and collides with a car just outside of Las Vegas. The cargo, a type of zombie, manages to break free from its restraints in the wreckage and makes its way into the desert. Soldiers comprising the convoy attempt to recapture the zombie but are ultimately killed by it in their efforts to do so. With no one left to stop the zombie, it makes its way to the helpless city of Las Vegas and the ignorant population who are unaware of the carnage that is headed their way. The situation quickly spirals out of control and the military fail to supress the zombie virus that spreads through the casino city. As such, they resort to the last possible course of action which is to quarantine the location with a large makeshift wall. 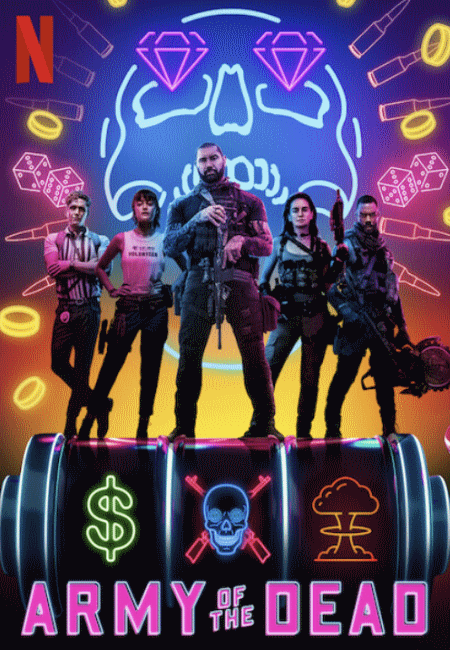 Six years after the incident and it has been decided by the President that he is going to launch a nuclear strike on Las Vegas to deal with the contained zombie threat. Upon hearing the news, a casino owner called Bly Tanaka approaches a mercenary, Scott Ward, who had lived in Vegas with a simple proposition. Bly wants Scott and a trusted team to break into the quarantined area to retrieve 200 million dollars from his own casino before it is destroyed by the nuclear warheads. Ward agrees to the terms and teams up with a diverse group with specific skills such as a world renowned safecracker and a tried and tested helicopter pilot. With the assistance of his estranged daughter who works in a nearby quarantine camp, Scott is smuggled past the security defences set up by the U.S. government and the group find themselves in the ruins of the city that is ruled by the walking dead.

While I enjoyed this movie for the most part, I wouldn’t classify it as a must watch for cinephiles although I wouldn’t consider myself a big fan of Snyder in the first place since I only really like his adaptation of Alan Moore’s comic book ‘Watchmen’. I certainly thought some parts were pleasantly fun and displayed a unique touch such as the zombie tiger which was an interesting reflection of the showmanship of the desert city. A problem I had with the movie, though, was the characters as most of them were generic and there was little emotional impact to be felt at their often bleak fates. The one character who stood out favourably to me however was Dieter, the German safecracker, played by Matthias Schweighofer. He was also the central figure in the prequel spinoff film named ‘Army of Thieves’. I have yet to see that movie but I will probably look into it at some stage.