Greetings, Extras is a television series from BBC that ran for two series and a concluding Christmas special. It aired from 2005 until its last episode was broadcast in December 2007. Ricky Gervais alongside Stephen Merchant both created as well as starred in the series as struggling actor Andy Millman and inept agent Darren Lamb. Gervais while best known for the Office, has starred in numerous works including Night at the Museum, Idiot Abroad and Ghost Town to name a few. He is also known for his stand-up comedy and as the author of children’s books known as the Flanimals. Stephen Merchant commonly works with Gervais on numerous projects and received critical acclaim when he portrayed a clumsy robot named Wheatley in the Portal sequel. Other performers involved in the show include Ashley Jensen as Maggie Jacobs and Shaun Williams as himself, as well as a large number of notable special guests. 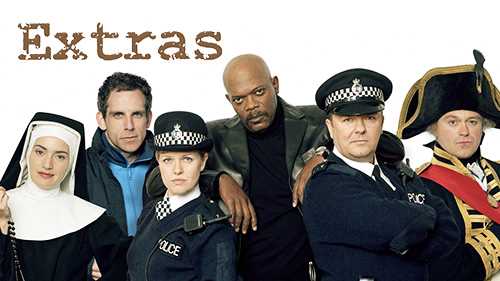 The plot is fairly simple as protagonist Andy Millman wishes to become a famous actor but is unable to land a role outside of being an extra. This is in part due to his unskilled agent Darren Lamb who continuously fails to find Andy work or any prominent roles. Maggie Jacobs, Andy’s ditzy but warm-hearted friend and fellow extra, spends a lot of time working with Millman on different sets. She doesn’t seem to have any aspiration to be famous and many storylines revolve around her bad luck with men. Warwick Davis, Ronnie Corbett, David Bowie, Patrick Stuart and Ian McKellen are among the celebrities that appear in the show. The guests normally have an exaggerated or outlandish personality which I found to be one of the main appeals of the series. Warwick Davis would also go on to work with Gervais and Merchant again in a similar project entitled ‘Life’s too short’. As with a lot of Ricky’s work, cringe humour plays a large role in the series as Andy Millman often finds himself in awkward scenarios. Although I never really explored his material before, I really did enjoy this one and am keen to see some more of his projects.

Still Game is a Scottish sitcom created by the BBC and the Comedy Unit. While having its roots as a stage play, the TV show began in 2002 and ended its sixth series in 2007. While there have been a few specials since then, 2016 marks the return of Still Game as the seventh series will air this year. The cast wouldn’t be well known outside of this show as Still Game seems to be the best known programme in the main actor’s filmography however they still deliver an enjoyable performance. The main actors and actresses consist of Ford Kiernan as Jack Jarvis, Greg Hamphill as Victor McDade, Paul Riley as Winston Ingram and Jane McCarry as Isa Drennan. 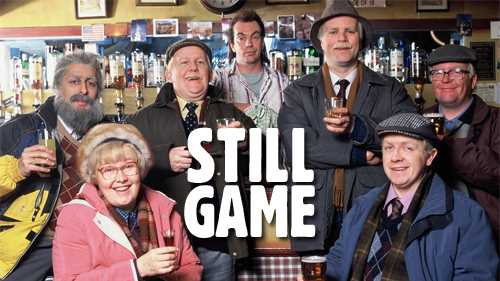 Like Extras, the plot is fairly simple as is common with sitcoms. The series follows the lives of two elderly friends living in the dreary Scottish settlement of Craiglane and focuses on their misadventures in their old age. The majority of the local residents consist of pensioners and chavs which ensures that Craiglane has a somewhat depressing atmosphere. Many of the former spend their time drinking in a local pub named the Clansman including the two leads of Victor and Jack. I have yet to see the sixth series but I hope to watch it someday as I had enjoyed the previous five. I’m also curious to see what the seventh series would be like considering it has been off the air for a considerable time now.

It ain't exactly a secret I didn't get these scars from falling over in church.

Greetings, Red Dead Redemption is a video game from 2010 and was developed by Rockstar San Diego. The game is actually the second instalment in the Red Dead series as it is a sequel to Red Dead Revolver, which was released some years prior in 2004. The game has a brilliant OST which provides Redemption with an excellent western atmosphere. The score was composed by Bill Elm and Woody Jackson but other musicians or bands including Jamie Lidlell as well Ashtar Command help to create this memorable soundtrack. Rob Wiethoff is the main voice actor in the game, giving a skilful and encaptivating performance as the flawed but charismatic protagonist John Marston. Other actors and actresses involved in the project are Anthony De Longis as Marshal Leigh Johnson, Ross Hagen as an old Western legend called Landon Ricketts, Don Creech as the snake oil salesman Nigel West Dickens and Kimberly Irion as the headstrong rancher Bonnie McFarlane.

The plot begins in 1911, in the dying days of the Old West and in which the age of modernity is coming to America. A former outlaw by the name of John Marston is forced by the Federal Bureau of Investigations to capture one of his former partners in crime, Bill Williamson. The Bureau are effectively holding Marston’s family hostage, therefore he needs to comply in order to see his wife Abigale and his son Jack again. Williamson now runs his own gang and has taken over a fortress known as Fort Mercer. John rides his horse to Fort Mercer to negotiate with Bill and asks for his old friend to surrender as Marston isn’t able to storm the compound singlehandedly. Williamson refuses to hand himself over to the authorities and shots John instead, leaving Marston to die from his wound outside of the fortress’s walls.

John Marston wakes up to find he is being medically looked after by a local rancher called Bonnie MacFarlane. Bonnie explains that she had discovered him critically injured outside Mercer and brought the hero to her ranch so that he could recover. Over the following days, John starts to heal and helps Bonnie around the ranch as a symbol of his gratitude. He knows he is unable to catch Bill as long as the outlaw can hide behind the walls of Fort Mercer so Marston begins to ally with the local Sherriff, Leigh Johnson, to clear up the crime in the neighbouring town of Armadillo. John slowly but surely comes into contact with several other important characters such as the conman West Dickens, a grave robber called Seth Briars and the drunken arms dealer named Irish. He aids them in their separate quests, in order to later receive their helping hand in his mission, and begins to pull his resources together. Eventually he forms a plan to assault Fort Mercer and capture Bill Williamson with the assets of his new allies.

Overall, this is one of the best games I have played and John Marston is one of the most intriguing characters I have ever came across in any medium. The conclusion is also one of the most emotive and engaging endings to a video game that I have experienced. There are numerous mini games to be enjoyed in the open world environment from bounty hunting to five finger fillet but they are not crucial elements that will affect the main campaign. Undead Nightmare is the non-canon DLC which takes place towards the end of the main storyline, with the plot centring around a zombie plague infecting both America and Mexico. John Marston must fight his way through zombie hoards to find a cure for his zombified family who were bitten in the introductory scene. Asides from zombies, other mythological creatures can be discovered in the game. For example the Sasquatch, Chupacabra, the four horses of the apocalypse and the Unicorn roam across the map. It should be noted that this DLC is highly broken and is littered with many bugs that force the player to reload to an earlier save which makes it infuriating at times. Despite, the broken nature of the DLC I really did enjoy it and had fun playing as John Marston in a western setting that was terrorized by zombie hordes.

Floo, Floo we've discussed this, mornings are for coffee and contemplation.