The Witcher 2: Assassins of Kings

Greetings, the Witcher 2: Assassins of Kings is a popular fantasy game that was released in 2011 by Polish develop CD Projekt Red and is the second instalment of the Witcher trilogy. The gaming series began in 2007 with the release of the Witcher and concluded some years later with Witcher 3: Wild Hunt in 2015. It should be mentioned that these characters, storylines and the lore in these instalments are all built upon the novels of author Andrzej Sapkowski. This game has an extensive cast but its actors and actresses are not particularly famous for the most part. Doug Cockle stars as the protagonist, Geralt of Rivia, Jaimi Barbakoff as the sorceress Triss Merrigold, Mark Healy as Vernon Roche , commander of the Temerian Special Forces, Mark Frost as an elven terrorist called Iorveth and Nicola Walker as another sorceress named Sile de Tansarvile. It also boasts an impressive soundtrack which was composed by Marcin Przybylowicz, a conductor who is mostly known for his contribution to this series. The Witcher 2’s storyline is a little complicated at first, especially for newcomers, but it does begin to make sense as it progresses along. In my opinion, the political climate that drives the story forward is not dissimilar to the complex allegiances and mischievous machinations witnessed in Game of Thrones.

The plot begins with the Witcher Geralt, a monster hunter with supernatural abilities, being interrogated by Vernon Roche. Geralt has been accused of the regicide of King Foltest, monarch of the Temerian kingdom, who the Witcher had previously protected as his right hand man. Geralt begins to defend himself during the questioning and explains what had happened in the lead up to the king’s assassination. Years prior, Foltest had a clandestine relationship with a Baroness Maria La Valette and two children, Anais and Boussy, were born as a result. The king decided to bring his children to live with him in his capital city after an earlier assassination attempt on Foltest’s life was foiled by Geralt. The Baroness refused to surrender the children to the Temerian king. As such, Foltest decided to wage war against her over the children and successfully storms her castle during the siege. The Witcher brings the ruler of Temeria to his children, who were hiding in a secluded monastery, while the battle still raged on around them. 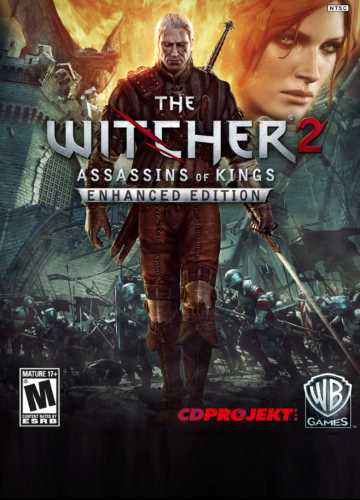 Geralt is too late to notice an assassin, pretending to be a blind monk, take out his sword as Foltest embraces his children. The monarch is fatally wounded and the killer discards the disguise, revealing himself to be a Witcher much like Geralt before escaping. Geralt is soon taken into custody and interrogated once he is discovered standing beside Foltest’s corpse by the king’s men. Roche, leader of the Temerian Special Forces known as the Blue Stripes, believes Geralt is telling the truth and helps break him free from prison. The two, along with the sorceress and the Witcher’s paramour Triss Merrigold, escape the city via boat to pursue the kingslayer that had tainted Geralt’s name. Their journey leads them to a city named Flotsam where they begin to unravel the mystery of the kingslayer and conspiracy theories slowly come to light.

Overall, I enjoyed this game and aim to play the other two titles in the trilogy in the near future. There a plenty of activities to occupy your time in the game from combating a vast range of original monsters, taking on side quests and mini games such as arm wrestling or partaking in the fictional in-game of gwent. One of the issues I had with this game is the lack of indication or markers for finding new missions. This was especially noticeable in regards to some of the side quests given by NPCs which could be easily missed by the player as maps could be rather large and full of common AIs who are only there to fill that space aesthetically. One of the reasons I found the Witcher 2 interesting is because it gives the players an important choice to make early on in the campaign. The results of this drastically alters the campaign’s narrative and forms two different branches of storyline that ensure the player has to play it at least twice to get the full experience it has to offer. While the main trilogy is complete, the Witcher still lives on as Netflix are also creating their own adaptation of the Witcher phenomenon and have cast Henry Cavill as the main protagonist.

Mrs. Robinson, you're trying to seduce me! Aren't you?