Greetings, Solo: A Star Wars Story is a 2018 film and serves as the second Star Wars anthology movie after Rogue One was released to cinemas in 2016. The movie is credited as being directed by Ron Howard after the backstage dramatics that led to Phil Lord and Christopher Miller, best known for the Lego Movie and Spider-Man: Into the Spider-verse, being fired. The film stars Alden Ehrenreich as the iconic smuggler Han Solo in his early days, Joonas Suotamo as the legendary Wookie Chewbacca and Community’s Donald Glover as fan favourite Lando Calrissian. Suotamo, a former Finnish basketball player, had taken over the role from the original Chewbacca actor, the late Peter Mayhew, for ‘The Force Awakens’, ‘The Last Jedi’ and ‘The Rise of Skywalker’.

Solo also introduces new characters and actors such as Qi’ra played by Emilia Clarke of Game of Thrones fame, Tobias Beckett as portrayed by Woody Harrelson, Thandie Newton as Val, Fleabag’s Phoebe Waller-Bridge as L3-37 and Paul Bettany as the villainous Dryden Vos. The score was composed by John Powell who has orchestrated music for a number of films including Chicken Run, Shrek, Rat Race, Mr and Mrs Smith and the Kung Fu Panda series.

The plot begins on Han’s home planet of Corellia, a grim and desolate world in which Han and his romantic partner named Qi’ra hope to escape from. Han obtains stolen starship fuel, which is called coaxium, and plans to use the valuable resource to bribe his and Qi’ra’s way out of Corellia. After being chased by the criminal syndicate of crime boss Lady Proxima, who wants the starship fuel for herself, Han and Qi’ra manage to momentarily elude her forces. Han successfully bribes an Imperial Officer of the Galactic Empire at a space sport to provide transport for both him and Qi’ra but only he manages to get to safety as Qi’ra was captured by the gang. A dejected Han promises to come back to rescue Qi’ra one day with a ship of his own and, in an impulsive act, enlists himself in the Imperial Navy. During the registration, the orphaned Han is given the surname ‘Solo’ by an Imperial Officer as he has no family ties of his own. 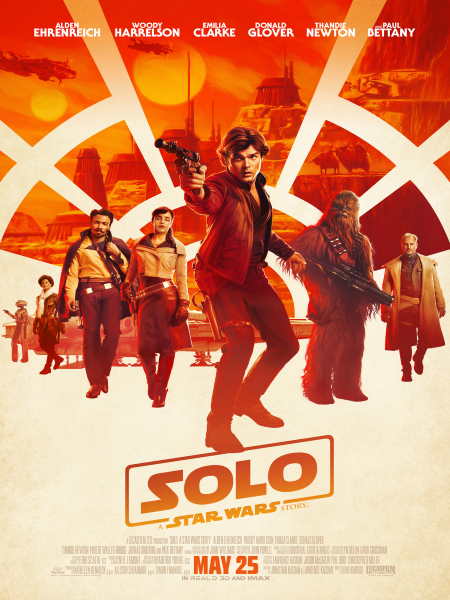 Three years pass and Han Solo is serving as an infantryman on Mimban during a heated battle. As he fights on the front lines, he discovers a plot by smugglers who are disguising themselves as soldiers of the Empire to hijack an Imperial ship. Han tries to join the group, led by Tobias Beckett, as a way out of military service but when he isn’t welcomed in he tries to force his way inside by blackmailing Beckett. This backfires and Beckett convinces some Imperial soldiers that Han is a deserter. This results in Han being thrown into a pit to be eaten by a monster. That monster is none other than Chewbacca, who has been chained to the pit and immediately attacks Han. After a brief fight, Han convinces Chewie that he can get them both out of the pit by breaking down the infrastructure that kept them trapped inside. They manage to escape and Beckett, impressed by their prison break, allows them to join his team as they take off with the stolen Imperial ship for a heist.

Solo, due in part to its numerous reshoots, is one of the most expensive films ever made. It is also the first Star Wars movie to bomb at the box office. While its failure to gain crowds was blamed on a fatigued audience who had grown weary of three Star Wars films across three consecutive years, I believe that it suffered more from other factors. One of these was the concept of the origin story itself which would undoubtedly remove the mystique around Han’s character and his shadowy criminal background. It was also difficult for some fans to accept the recasting of such a beloved character as Solo, arguably Harrison Ford’s most notable character and certainly the role that brought him to stardom.

The main problem, in my opinion, is that it had the unenviable task of following the Last Jedi. A film that has seemingly destroyed the Star Wars fandom to a devastating degree and ruined Disney’s plans to make countless new movies for this one time juggernaut of a property. Solo is better than the Last Jedi and the as of then unreleased Rise of Skywalker but it ultimately feels unnecessary and most, but not all, of the new characters are either forgettable or annoying such as Waller Bridge’s L3-37. Lucasfilm is reportedly or at least rumoured to be in a disunited state as of now with power struggles occurring and warring factions battling it out within the company itself but there is some cause for hope for better projects in the future. The Mandalorian, a Space Western series for Disney Plus, is a recent addition to the Star Wars brand that I can say is one of the most captivating pieces of media that I have seen in years.

The Black Panther has been the protector of Wakanda for generations. A mantle passed from warrior to warrior. And now, because your friend murdered my father, I also wear the mantle of king. So I ask you, as both warrior and king... how long do you think you can keep your friend safe from me?