The Dark Tower: The Wind through the Keyhole

Greetings, The Wind through the Keyhole is a novel that was penned by Steven King and was published in 2012. It is the eighth book in the Dark Tower saga, the saga being one of King’s main works, and it is the last novel in the series to have been written. In terms of the fictional chronology, it is takes place between the fourth and fifth books which are named Wizard and Glass and the Wolves of Calla. It is similar to previous novel, Wizard and Glass, as it revolves mostly around the adventures of the protagonist, a gunslinger named Roland, while he is still quite young. As such most of the main characters in the series have few chapters devoted to them, instead elaborating on characters from Roland’s teenage years that had only been mentioned in passing in previous books.

The plot is quiet irregular as it is made up of three different but interconnecting stories that are contained within each other. It begins with Roland and his friends travelling on their dangerous path to the Dark Tower after the events of Wizard and Glass. When they arrive at a desolate town, Roland is able to tell that a terrible storm known as a starkblast is coming their way and so they barricade themselves in at the local town hall, planning to wait out the storm that would freeze everything in its path. To pass the time Roland speaks of his past as he tells his audience that when he was a teenager he and his friend, Jamie DeCurry, where sent by his father to a little town called Debaria to solve a mysterious murder case. Reports coming from the town suggested that a Skin-changer, a supernatural creature that takes the appearance of a man and could change its form, was on a killing spree in the small settlement and that it needed to be stopped by gunslingers. The adult gunslingers were busy fighting a war at the time, a conflict that wasn’t expanded on much by King, which meant that the two teenagers had to solve the problem on their own. 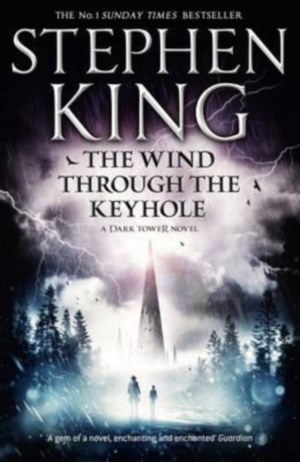 When Roland and Jaime arrived in the town they uncover that there had been an attack on a local farm and that one of the victims had survived. The sole survivor, a young boy named Bill, had apparently seen the creature revert back to its human form but was unable to get much of a good view as he had only seen the creature’s feet. Roland wishes to use the boy as bait in his hunt for the monster as he hopes to lure creature out of hiding as it would have intention of killing Bill to keep its identity secret. The young Roland also tries to ease Bill’s fear of being identified by the skin-man by telling him a story from his childhood, “The Wind through the Keyhole”. It is a fable about a young boy called Tim Ross who had lost his father under suspicious circumstances, forcing his mother to marry an abusive drunk, his father’s best friend before he died. The story is somewhat complicated and is partially about Tim uncovering what had really happened to his father.

The Dark Tower is a strange series which has so far involved psychotic monorails, vampires, giant bears and witches but it is enjoyable if you can appreciate its strange mix of genres. I only have two more novels to read, Songs of Susannah and the Dark Tower, which will hopefully be posted in this blog in the coming years. There are also talks about a film coming out which should be interesting to see, starring Russel Crowe as Roland of Gilead and Aaron Paul of Breaking Bad fame to star as ex-drug addict Eddie Dean. I thought the book was an interesting read and wonder how King is going to end it.

Distrusting me was the wisest thing you've done since you climbed off your horse.

Greetings, Hector: Badge of Carnage is a point and click adventure game that was developed by Straandlooper and published by Telltale Games. Straandlooper is an animation studio and game developer located in Northern Ireland with the Hector series being the first game they have ever made. Like other Telltale works Badge of Carnage has an episodic format that consisting of three segments in total and a storyline that runs through all the episodes. The humour is adult in nature, with the plot being set in the fictitious and degenerate town of Clappers Wreak, infamously renowned as the crime capital of Britain.

The storyline follows the brutish and vulgar protagonist, Detective Inspector Hector of Clappers Wreak Police Service as he gets entangled in a hostage situation that is occurring in an abandoned building. Hector is sent in to settle the situation by order of Meeks, Chief Superintendent and Hector’s boss, after several negotiators are killed by a skilled sniper hiding in the abandoned building. Once negotiations begins it is revealed that the unidentified terrorist is shocked at how far the town has sunk into depravity and demands that Hector rebuild Clappers Wreak by handing him three assignments. 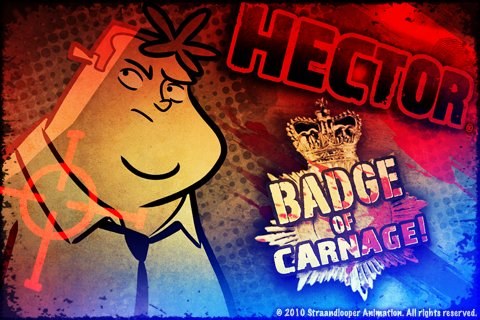 As such Hector is forced to comply, repairing the dysfunctional town clock, destroying the local adult entertainment industry and donating a large sum of money to Barnsley Noble, head of the Clappers Wreak Preservation Society. The first episode is rather simple in terms of plot as Hector merely fulfils the sniper’s demands but it expands later on with the terrorist being identified at the end of the second episode and the aims of the villain being uncovered in the third game.

The series has a large and colourful cast of characters, some of which appear throughout the whole trilogy, but only two of them are playable. Hector’s slow witted partner, Lambert, becomes an increasingly important character as the story progresses and the player has to take control of him to solve certain puzzles in the last two episodes. The puzzles are unusual and can only be completed with the use of various items found throughout the map, some of which have to be combined in order to solve them. Overall it is an enjoyable game with interesting challenges, art style, setting and characters, especially Hector himself.

Today. Today... at the edge of our hope, at the end of our time, we have chosen not only to believe in ourselves, but in each other. Today there is not a man nor woman in here that shall stand alone. Not today. Today we face the monsters that are at our door, and bring the fight to them. Today, we are cancelling the apocalypse!

Greetings, Pacific Rim is a 2013 film that was directed by Guillermo del Toro, fusing together the two genres of Kaiju and Mecha into one movie. The most prominent cast members of Pacific Rim include Charlie Hunnam as the main protagonist, with supporting roles from actors such as Idris Elba, Rinko Kikuchi, Ron Pearlman and Burn Gorman. Ellen McLain takes on a role similar to her infamous character GLaDOS from the Portal series by voicing the AI system of a Jaeger called Gipsy Danger, a humanoid mecha designed to kill the Kaijus. A sequel had been announced earlier in 2014 and is set for release in 2017.

The plot is mostly set in the 2020s and begins in 2013 when Earth is attacked for the first time by an aggressive creature named a Kaiju that emerged from the Pacific Ocean. Existing military vehicles and weapons prove to be useless against the monster, leading to the creation of the Jaeger program. Jaegers are large combat robots that can only be operated by two people who are able to drift together, a term which means the two pilots must mentally link their minds together to control the mecha. The program is successful in the beginning of the invasion until the Kaiju attacks become more frequent and more powerful as the creatures adapt to humanity’s counter-attacks. It is revealed that the Kaiju come from another dimension and are able to enter earth through a portal hidden in the Pacific Ocean floor.

In the year 2020, the protagonist and his brother, Raleigh and Yancy Becket are sent on a mission to stop a Kaiju. Yancy is killed in action while still in drift with his brother, Raleigh manages to survive the fight but ultimately leaves the program due to his failure to protect his brother. Becket becomes involved in another form of defence, the construction of giant coastal walls that are designed to keep the Kaijus out of major settlements. Due to a change in strategy, the Jaeger program lead by Stacker Pentecost is about to be closed down until one of the coastal walls fails as a Kaiju breaks it down. With humanity facing the possibility of extinction Pentecost suggests a suicidal mission as a last resort in which the remaining Jaegers fight their way to the portal and destroy it by detonating a nuclear bomb inside of it.

Overall, it is an enjoyable movie that is visually pleasing with plenty of fight scenes between the Jaegers and the Kaiju. The actors and actresses deliver a strong performance, with the characters of Pentecost, Dr Herman Gottlieb and Hannibal Chau being among the most memorable. While the film does have some intriguing characters and ideas such as the concept of the drift, I still wouldn’t call it a must see film but it is one of the better ones I have seen lately and would encourage you to watch it. I’m not sure what the planned sequel would be like due to the events of the first Pacific Rim but I am looking forward to what it will add to the story.

Kill him and I'll pay whatever you want. Make him suffer and I'll double it.