Greetings, Monsters University is a 2013 prequel to Pixar’s original 2001 film, Monsters Inc. It has retained most of its notable main cast such as Billy Crystal, John Goodman and Steve Buscemi reprising their roles as well as adding new members like Helen Mirren. While the film does not include or reference Boo, presumably because she wouldn’t have yet been born, it does elaborate on the relationship between Mike and Scully as well as setting the stage for Randall as a villain in Monster’s Inc. Some of the original characters also receive cameo roles towards the end of the film such as the slug like monster named Roz.

The plot begins with a very young Mike on a field trip to Monster’s Inc. While watching the scarers do their job he is inspired to grow up to be just like them, years pass and he begins to start his time at Monsters University. While he studies hard, Mike is held back by the fact that he isn’t frightening and this begins a rivalry with the slacking but naturally talented student, Scully, as they try to outcompete each other. Their contest disrupts the final exam and Dean Hardscrabble drops them both from the program because of it. 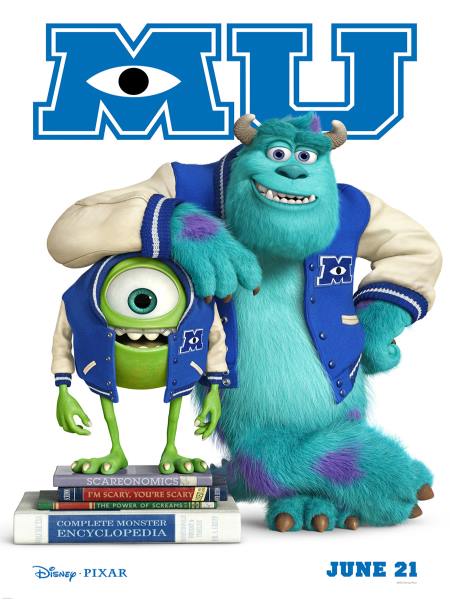 Mike attempts to prove his skills to the entire university by entering the scare games. He has to join the unprofessional team, Oozma Kappa, but reluctantly has to side with his opponent Scully if he wants to compete in the games. Therefore, in order to win Mike and Scully have to work together using their different skills as well as having to train with incompetent students. The different groups compete against each other in challenges with the main antagonists being the jock like students from Roar Omega Roar, which contains Mike’s old roommate and future enemy, Randall.

Monsters University was Pixar’s first prequel movie and it is one I enjoyed. It gave an interesting series of events by making the two protagonists rivals and set in motion the story line of Monsters Inc . In my opinion, the film does a good job of keeping true to the characters while giving them a history that doesn’t contradict their established personalities, especially since it has been over a decade since the original was made.

I am the man with no name. Zapp Brannigan at your service.

Greetings, the 1990 film version of Misery was based on Stephen King’s 1987 novel with the same name. There are only a few main actors, namely James Caan as the famous writer Paul Sheldon and Kathy Bates as the mentally unstable nurse Annie Wilkes, who is strangely child like especially when upset, choosing strange words to express herself. Despite the fact there are a limited number of characters and the story is mostly constricted to one room, I still found it enjoyable as it was mostly devoted to watching Wilkes descend into a violent, obsessive individual. While I imagine the book would have created a greater tense atmosphere as well having a more developed background to the characters, the film did a good job for the amount of screen time it had.

The plot is fairly simple and begins with a severe blizzard occurring between Silver Creek in Colorado and Los Angeles. Paul Sheldon, the famous writer of the Misery novels, is unaware that a snow storm is kicking up as he is travelling in his car to get his latest book published. Due to the storm, Sheldon manages to crash his car in a remote area and is badly injured with both legs broken. Annie Wilkes, a fan of his who had been following him, manages to pry the author out of his car and brings him back to her nearby house. 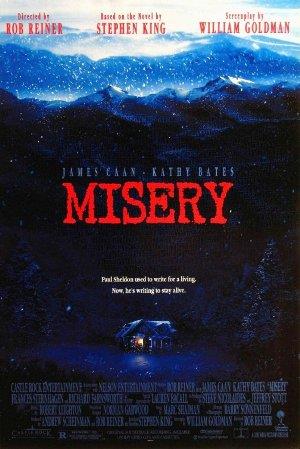 At her home, Annie begins to treat the writer as it is revealed that she is a nurse. When Paul regains consciousness she claims that she is his number one fan. However, Sheldon soon realizes that Wilkes has no intention of freeing him, especially not after Paul had killed off her favourite fictional character from Misery. Wilkes forces the author to bring the character back to life in a new novel and claims that nobody is coming for him. As Annie’s unpleasant nature is discovered, Paul attempts to find a way to escape or if he has no other choice, to kill his obsessive number one fan.

I do believe some of the characters could have been better developed such as the old sheriff called Buster. While the sheriff does have an important role to play in finding out the whereabouts of Paul, he is more of a plot device than a character with an interesting personality. However, this is only a minor issue as the time dedicated to the protagonist and antagonist, as well as their uneasy relationship, is what really drives the story forward. It is an older film which lacks modern effects but none the less it provides the audience with some disturbing entertainment and is spurred on by the two main actors’ talents.